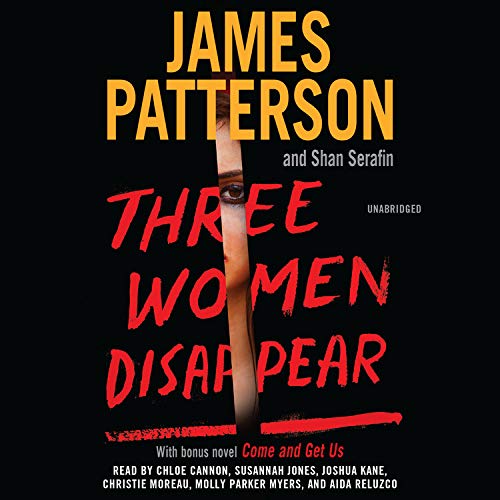 Three women all have a reason to hate a rich stockbroker and all three vanish from thin air when he is found dead. Is it because they're all guilty? Or is the truth even more shocking?

When a rich stockbroker is found dead, the police deem it a suicide. Until suspicious facts start to come up and point the finger at three women: His personal chef, his housekeeper, and his ex-wife. But all women have gone missing. Is it because they're all guilty? Or is the truth even more shocking?

I listened to the audio edition of the book. I realized for years that the Patterson books I’ve just been are nothing like his original works. There’s no way that he could be writing his books.... just plain bad. This was no exception. It was dreadful. I was in for three hours trying to think that it would get better but it was awful. Her accented voices was really hard to get into. The Spanish accent had hints of Irish in it. It was just really really bad. I’m thinking he’s just slapping his name on it and calling it a day. Patrick Patterson fans. Don’t waste your money and time

I gave it about an hour hoping that it might evolve into something close to James Patterson’s original books, but I found the narration so abysmal that all hope was quickly lost.. I found the narration irritating to say the least and I’m afraid this combined with poor writing (I would be aware of any Patterson book that he’s "co-written, because I see little of his old success) has killed any hope for a successful novel.

This is unbelievably bad and I tried to find something positive. I might have stopped if it were not for our power outage with Hurricane Zeta!

Couldn’t even finish it

I was so excited when I saw a new James Patterson. I have listened to almost all of his. I am not super picky as long as there is a good story and suspense. This book is so boring that not matter how fast I listened to it I couldn’t get into it. Very very boring .

This was the most lame book I think I have read in a very long time. I used to love James Patterson books, man this just ended like is that it??? Don’t waste your credits or money!

This book and the surprise bookshot at the end had me on the edge of my seat the entire time! I listen to books during my commute (I’m a teacher) and I have ALWAYS been a huge James Patterson fan-ever since I was about 10 years old. I’ve listened and read so many of his books that I can usually predict what will happen, and I’m totally okay with that. This story was completely unpredictable though! And the bookshot at the end—oh my gosh. So good!

These two books are so contrived they are comedic rather than thrillers. A diabetic cook, maid, and wife successfully murder husbands and others. Medicine was wrong, altered to make a convenient excuse. Second story even worse. Did neither author have children? Save your credits. Save your time. Don’t bother. Happy endings for strong abused women living a fantasy

Not Worth a Credit ,James return to writing solo

Got me again, purchased this book based on the OLD James Patterson novels that could be guaranteed good listening...... Characters were presented frequently, before you got to become familiar with them and how they fit into a shaky story line...... Some Mafia, some bad cop, some domestic violence.......all of this did not contribute to a good listen.....James, go back to solo authoring.......

I have been of James Patterson forever. This is this book was terrible! I agree with other reviewers. No way he wrote such a poor excuse of a book. The story was boring. The narrators didn't blend well. Quality is always better than quantity.