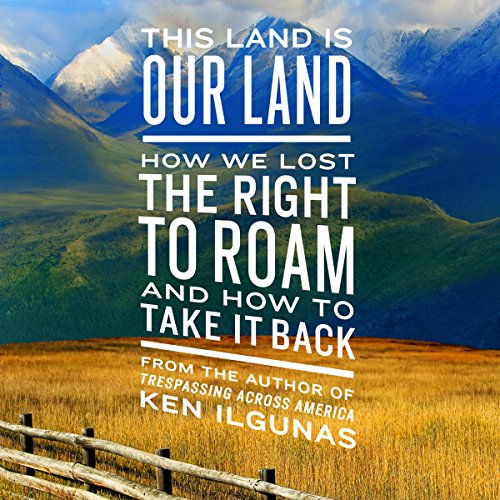 This Land Is Our Land

How We Lost the Right to Roam and How to Take It Back
De : Ken Ilgunas
Lu par : Andrew Eiden
Durée : 6 h et 20 min
Catégories : Anglais - Science & Technology, Environment

This Land Is Our Land

Private property is everywhere. Almost anywhere you walk in the United States, you will spot "No Trespassing" and "Private Property" signs on trees and fence posts. In America, there are more than a billion acres of grassland pasture, cropland, and forest, and miles and miles of coastlines that are mostly closed off to the public. Meanwhile, America’s public lands are threatened by extremist groups and right-wing think tanks who call for our public lands to be sold to the highest bidder and closed off to everyone else. If these groups get their way, public property may become private, precious green spaces may be developed, and the common good may be sacrificed for the benefit of the wealthy few.

Ken Ilgunas, lifelong traveler, hitchhiker, and roamer, takes listeners back to the 19th century, when Americans were allowed to journey undisturbed across the country. Today, though, America finds itself as an outlier in the Western world as a number of European countries have created sophisticated legal systems that protect landowners and give citizens generous roaming rights to their countries' green spaces.

Inspired by the United States' history of roaming, and taking guidance from present-day Europe, Ilgunas calls into question our entrenched understanding of private property and provocatively proposes something unheard of: opening up American private property for public recreation. He imagines a future in which folks everywhere will have the right to walk safely, explore freely, and roam boldly - from California to the New York island, from the Redwood Forest to the Gulf Stream waters.

This can be hard to handle at first, but...

We all need to hear this, our future depends on it! We can't keep going down the path we're going, plus the alternative presented is fantastic!

This book is wonderful and eye opening! BUT the performance is delivered with a condescending tone. I felt like I'm being talked down to!

Great idea, but kinda wanted less of a thesis.

Reading this book made me crave reading the other books by Ken Ilgunas. I did appreciate the strong belief in roaming, and the history was interesting. I certainly agree with roaming as a philosophy, and I do wish we all had roaming rights in the Americas. Still, I would have been happier with the stories of Ilgunas's roaming. He has gone to so many amazing places by foot, and it impresses me. I have thought about "tresspassing" and landowning rights for a long time, and am happy someone else is out there roaming.

Great content, although maybe a bit idealistic. However, the reader sort of killed it for me; he made the author sound like an egotistical bro.