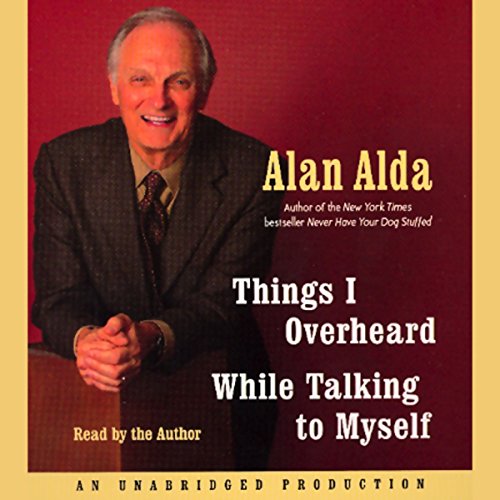 Things I Overheard While Talking to Myself

On the heels of his acclaimed memoir, Never Have Your Dog Stuffed, beloved actor and best-selling author Alan Alda has written Things I Overheard While Talking to Myself, an insightful and funny look at some of the impossible questions he's asked himself over the years.

Picking up where his best-selling memoir left off, and having been saved by emergency surgery after nearly dying on a mountaintop in Chile, Alda finds himself not only glad to be alive but searching for a way to squeeze the most juice out of his new life. Looking for a sense of meaning that would make this extra time count, he listens in on things he's heard himself saying in private and in public at critical points in his life - from the turbulence of the 60s, to his first Broadway show, to the birth of his children, to the ache of September 11, and beyond.

Reflecting on the transitions in his life and in all our lives, he wonders if there's one thing - art, activism, family, money, fame - that could lead to a "life of meaning".

In an audiobook that is candid, wise, and as questioning as it is incisive, Alda amuses and moves us with his unique and hilarious meditations on questions great and small. Things I Overheard While Talking to Myself is another superb Alan Alda performance, as inspiring and entertaining as the man himself.

"Alda is chatty, easygoing and humble, rather like a Mr. Rogers for grownups. His words of inspiration would be a perfect gift for a college grad or for anyone facing major life changes." ( Publishers Weekly)

I enjoyed hearing the speeches and anecdotes from Alan himself. I told my son, who has ADD, to at least listen to the last 30 minutes. He listened to the entire book, and was impressed and inspired with the bits of knowledge as well. I am now looking forward to listening to the entire autobiography that awaits

A great learning tool from a well admired man.

I have listened to this book six times. every time I learn more about myself.

Just what I needed to hear

I love Alan Alda for MASH, but this audio book came at the perfect time in my life. I'm struggling to find meaning in my life and this book just says what I needed to hear to keep looking. Thank you, for every word.

No, I'm not qualified. Okay, make it a book.

Alan Alda has been asked to give speeches many times simply because he is famous. He himself realizes this gives him no particular authority to stand before people who usually know more than he does about a particular subject, and talk for ten or fifteen minutes.
But over and over he accepts these speaking assignments, because he can't let so-and-so down, or some other insubstantial reason. Now he has collected these commencement addresses, eulogy’s, and talks into a book. Sounds reasonable, right?
Alda is not a bad writer, but I can't go along with all of his conclusions, nor can I ride his far left train. Otherwise enjoyable.

love it, highly recommend it.

I rarely do review books here. Buy this is one of the best books I have listen to in a while. A lot of insightful stories about life in general and how to go about it.
Thanks Alda

Life is the Meaning of Life

What a brilliant, profound, get your curiosity rebooted account of a well read gentleman's true to himself, still growing and learning life!
Deep and funny, true and provocative, there is much to be enjoyed and reflected on here. Thank you, Alan Alda!

I’ve grew up watching reruns of mash and I always loved Hawkeye. I got very interested in Alan Alda because I believed in his values. I love his books and will continue to read them. I love that he is reading them. I truly love his voice and could listen to him speak for hours. (which I have)

“Love your art, however poor it may be”

I grew up watching M*A*S*H with my dad and my brother and I jokingly say “everything I ever needed to learn was from M*A*S*H.” Upon listening to this book, I was completely floored by how much more charming, genuine, and optimistic Alan Alda is in real life. I’m inspired at his love for life, truth, compassion, authenticity, community, and his dedication to his art and family. This comes at a truly needed time in my life and it will make you reevaluate your life priorities.

Alan Alda is a absolutely delight and a real treat

I love listening to Alda's books and hearing him talking about life and the lessons he's taken away from his journeys and time he has spent in life.