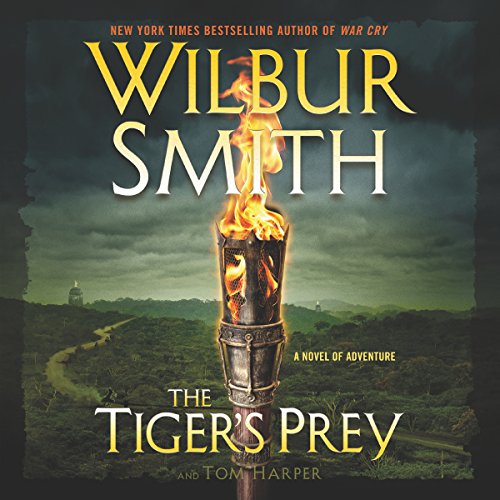 The New York Times best-selling author of Desert God and Pharaoh adds another chapter to his popular historical saga featuring the seafaring Tom Courtney, the hero of Monsoon and Blue Horizon, with this magnificent swashbuckling saga set in the 18th century and packed with action, violence, romance, and rousing adventure.

Tom Courtney, one of four sons of master mariner Sir Hal Courtney, once again sets sail on a treacherous journey that will take him across the vast reaches of the ocean and pit him against dangerous enemies in exotic destinations. But just as the winds propel his sails, passion drives his heart. Turning his ship toward the unknown, Tom Courtney will ultimately find his destiny - and lay the future for the Courtney family.

Wilbur Smith, the world's greatest storyteller, once again recreates all the drama, uncertainty, and courage of a bygone era in this thrilling saga of the sea.

takes me back to the original trilogy!

Amazing how after so many years the whole trilogy came flodding back to me, great!

Wilbur Smith as always writes a gripping story that holds your attention from beginning to end. I couldn’t believe it was already over when I looked and saw it was then end of the 17th chapter already. His descriptions are amazing

this book very entertaining. Almost as good as the first couple of W. Smith books.

Not written in the usual Wilbur Smith style. I skipped often in order to finish. The storyline is OK but the flashbacks and the descriptions are overwhelming. It also had too much gore and the bad guys were truly evil, no redemption.

wonderful series but this novel has many parts

While I love all of Wilbur Smith' series, this novel is a little fragmented with many moving parts. While it was easy to follow while reading was easier, I had to replay the audio to get details.

I love the Courtney series. I discovered Wilbur Smith by reading The blue Horizon.. this book was about Tom and Dorian before Blue Horizon and after Monsoon. It has the same fast pace historical action that I still love listening to. the narrator does a wonderful job. get this one.

Another great adventure story that leaves you wanting more! Narrator's voice is perfect for the various characters.

finally the rest of the story

this was very interesting well-fitted story that began with birds of prey and monsoon and I thought was ended with blue Horizons but this fits in there very well between Monsoon and blue Horizons but it's only half the story we still have to find out what happened to Dorian Courtney.

like Wilbur Smith but couldn't get into this one

we eventually gave up on this book. Listened for about 2 hours waiting for something compelling in the book. not your typical fast moving Wilbur Smith.

I decided before I listened to this to go back and listen/read each of the early Courteney books in order. It had been such a long time since they first came out that I wanted to catch up on the characters again, so I could remember who was who. So, I ended that trek down memory lane with Blue Horizon, thinking thinking that Tiger's Prey would be the next installment because it was written so much later. However, as I started listening, I realized that Blue Horizon actually comes after this one. Go figure? Some of the characters that were killed off in Blue Horizon are still around in Tiger's Prey and are an integral part of the story. I have mixed feelings about Wilbur Smith's novels. I love the adventures, but I am really turned off by the graphic violence and the graphic sex becomes quite boring. At least I can fast forward past those parts. They are really swashbucklers and the characters are interesting. Mike Grady is an excellent narrator and captures each character really well and makes them multi-dimensional. I like historical fiction and non fiction because it always makes me realize that no matter how we view our present times I realize how lucky we are to live now and how much life has improved.