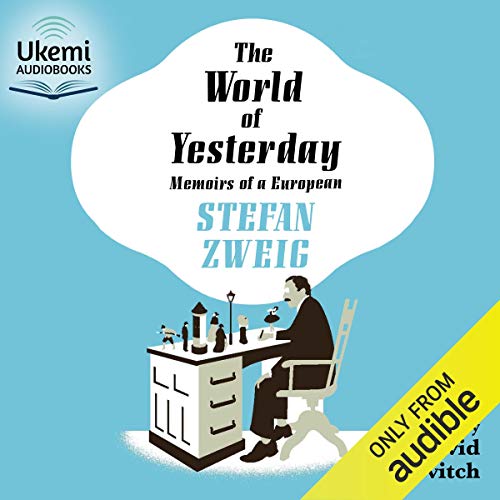 The World of Yesterday

The World of Yesterday

Stefan Zweig's memoir, The World of Yesterday, recalls the golden age of prewar Europe - its seeming permanence, its promise and its devastating fall with the onset of two world wars. Zweig's passionate, evocative prose paints a stunning portrait of an era that danced brilliantly on the brink of extinction. It is an unusually humane account of Europe from the closing years of the 19th century through to World War II, seen through the eyes of one of the most famous writers of his era. Zweig's books (novels, biographies, essays) were translated into numerous languages, and he moved in the highest literary circles; he also encountered many leading political and social figures of his day.

The World of Yesterday is a remarkable, totally engrossing history. This translation by the award-winning Anthea Bell captures the spirit of Zweig's writing in arguably his most important work, completed shortly before his tragic death in 1942. It is read with sympathy and understanding by David Horovitch.

"One of the greatest memoirs of the twentieth century." (David Hare)
"Zweig's celebration of the brotherhood of peoples reminds us that there is another way." ( The Nation)

A compelling memoir. I would love to see a collection of stories, his novellas and more of his non fiction available on audible.

Lucidity whilst Civilization reverts to barbarism

Zweig conveys Within his memoir a rational observation ofHitlers rape upon civilization thereby rendering categorical destruction that became known as The Final Solution. Zweig' s first hand experience reveals to us the reader both a minds journey into Diaspora partnered with literal flight from his homeland, Austria and the threatening clouds of war encumbered once again what has been the Jewish burden since Moses lead his people out of Egypt. Calm and collected I walked with Zweig as he spoke the inner world of a man in the act of losing all held in highest priority to be truly civilized and autonomous. I am a better person now for having read this account. I am sincerely grateful for his effort in gifting posterity so we and future generations have a light on to see the signs of moral decay and respond with either pen or mobilization against Evil.

My first audio book... what an experience

I tried this book after reading an article about it in The New Yorker. I later realized that the article addressed only one aspect of the book, the lead up to WWII. As described to a friend: "Highly recommended! It was my first audio book, and I'd suggest that format. For me, it was like listening to that rare old relative who led a fascinating life AND knows how to tell a story. Art, politics, history..." It's hard to imagine better narrator for this work; I was totally immersed. Note that the memoir is mostly told chronologically, and I encourage you to stick with it if you find the early parts about his childhood to be slow-going. Trust me, it s worth it.


An inimitably enriching, terrifically enthralling literary memoir of Stefan Zweig, an Austrian writer who was the world's most popular in the 1930s until he was forced by increasing Nazi pressure to flee continental Europe in 1934 and emigrate to England, the United States and ultimately Brazil.

Zweig's gorgeous descriptions and memories sweep the reader into the Hapsburg empire of the early 20th Century. He vividly captures the aesthetics, sophisticated culture, art and beauty of Vienna at the time. It's like a dreamscape in homage to his homeland.

Zweig then drops the reader into a palpable simulation of the fear and utter disbelief one would feel to be a world-famous author who is forced to abandon his home and homeland and run for his life simply because he was born Jewish.

I read a short story of Stefan Zweig in German in college. I was floored by the beauty of the language, the superb phrasing. It gave me a new respect of translators who have a thankless job trying to match the beauty of their native language into English. So before listening to this book, I felt I already found an intimacy with Stefan. This book did not disappoint. He brings the world of Europe into close contact. His friends and acquaintances become breathing individuals. You enter a world of yesteryear. He helps you understand a time you only vaguely knew.

History brought to life and feeling!

This is remarkable! Through his eyes we see Europe at the end of the nineteenth century up until the Second World War. More importantly human nature at its best and worst. Self deception fueled by a hope for peace enables the worst of our species to destroy people , culture and civilization (a way of life).Given what is happening in our country this book Could be written today,about today. I had nightmares! The human nature or should I say lack of it remains a threat to existence!

Stefan Zweig was one of the great literary minds and social observers of the 20th century and deserves to be better known than he is. His description of prewar Europe is better than anything that I’ve ever read in a textbook and although one might quibble over the details the affection for the culture and the fear that it is being destroyed are unforgettable. I wish that he had it given up on Europe and on himself.

The focus of this book is the world of the intellectual elite, about which Zweig has a rare and keen sensibility. Despite his sensitivity to the moral fate of humanity during this time, I found him to come off a bit arrogant, probably because of his privileged place in society. I am sure this was not his intention, but his descriptions of the lower classes (e.g. Russian peasants, laborers) sounded accidentally condescending. I agree with most of the 3-star reviews on Goodreads. I think the book is often long-winded and his perspective is often subjective. It merges memoir with history, but not necessarily in a good way. The narrator could not have been better! 5-stars for narration.

An amasing portrait of an unsuspecting generation.

let's get the first thing out of the way. The narrator is excellent! There are footnotes added to the narration. They help flesh out the context. The short note of the translator at the end is also very wolcome and it answers a central question I was asking myself throughout the book in relation to Zweig's suicide. The book itself is marvellous! A beautiful, if heardbreaking, portrait of a generation (and a class within it) which were too idealistic to foresee the horrors thay lay in store. The simple persistence in the wake of the disasters of war and hate shows the courage certain individuals had to stand up for decency and friendship while the world around them descended into madness. This book shows how sometimes the most sensitive of souls can manifest the greatest sort of bravery: staying true to your humanity. by no means is this book only about war and standing up to it, howecer. It is also about Europe, colourful individuals, women's emancipation, mass ideologies, Jewish identity, class society, travels, civil liberties and the creative process. Stefan Zweig left us a great before he tragically decided to end his life in 1942. It is the story of his remarkable life in remarkable times!

Since Zweig actually lived in Vienna, he is fantastically insightful into the goings on of totalitarian take overs of smaller countries. This is one of the most interesting books I’ve ever read. I’ve read many other of Zweigs books And so I’m not surprised at his master full descriptions of his home country and the countries he moves to to escape Hitler.