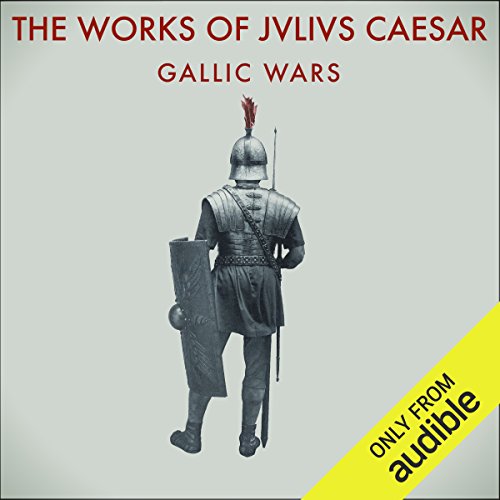 The Works of Julius Caesar: The Gallic Wars

Contained here is Julius Caesar's own account of his military adventures in Gaul at the head of the Roman army, uniquely presented in Caesar's first-person perspective (rather than as a third-person narrative as in the original Latin). Included are seven sections ("books") of the Gallic War, each encompassing one year of Caesar's battles and intrigues; though there is an eighth book, it is generally accepted to have been written by another general, shortly after Caesar's death in 44 BCE.

This production is based on a translation of the work by W.A. McDevitte and W.S. Bohn published in New York in 1869.

Students, here is a good one!

Disclaimers: I am not in the military and I do not live in Europe. I got this book from a friend.
It seems like a couple of millennia since I studied Latin, but who can forget "All Gaul is divided..."? I don't know if partially translating this work is still part of modern curricula, but I ASSume that studying this work is required reading in most military programs and certainly in archaeology and ancient history studies.
This translation seems eminently readable and easily understood (preferably with a map of Europe at hand to make correlation of data more fully assimilated). Current maps make the studies more real and interesting despite the time difference.
If this book is on your required list, you are in luck if you choose this version narrated by Jack Chekijian. While it is true that he performs (as usual) in lecture mode, it is unlikely that you will fall asleep if you follow some simple, logical steps. 1. Give it a first listen at a comfortably quick speed for an overview. 2. Next, listen to it at recorded speed with notebook (proven method to better retention of data) and(if possible) maps at hand. There will be adequate time to write notes and no stop/rewind/restart nonsense. I enjoyed this trip to the past.

What does Jack Chekijian bring to the story that you wouldn’t experience if you just read the book?

He narrated the book quite well.

The audiobook and the story itself is very helpful to students of this subject matter.

Very historical. Very helpful for students studying Roman history and those who are studying about Julius Caesar

One of my first audiobooks was the Charlton Griffin Commentaries of Julius Caesar. As much as I wanted to get through, I couldn’t take Griffin’s bombast and fake British accent. Why does that guy get all the great ancient classics? He’s horrible. Anyway I like this guy a lot. Jack Chekijan has a nice, matter of fact deliver which serves Caesar’s nerves of steel narrative well. I also like the translation by McDevitte and Bhon. Audible switched the narrative to first person which may offend some purists but it actually works quite well as an audio narrative. By the way, you’ll have to get both books, this this the Gallic Wars. The Civil War is sold separately but they’re both fairly cheap.

Good but hard to Digest in One Sitting

I listened to this audiobook in several sittings. It was interesting but somewhat dry for me. For someone interested in the writings of Julius Caesar for history then this is a great listen. I don't remember if this was a requirement in high school but it wasn't for what I went to college for.

I think the translation was pretty awesome and I would also agree with another reviewer on the best way to listen to this book.

You won't find a better narrator for this type of book than Jack Chekijian. He speaks clearly and slowly with impeccable pronunciation. He's very easy to understand and is also one of my fave readers.

Very easy to follow and extremely well narrated. I will listen to this book several times, I'm sure.

Caesar as he is meant to be spoken. Excellent rendition of this great Chronicle. Many things I never knew about Caesar's Gallic Campaign. A simple joy to read!!

The words of Julius Caesar

I have read a lot about Ceasar and I have had his works on my to read list for a while now. With that said I would suggest it would help if you do have at least some basic knowledge of the Gallic wars before hand.

I personally like the narrator where I could imagine Julius Caesar sounding very similar. At times it does sound a bit monotone and Ceasar writes come across very report like not to uncommon from military History books. If you are a fan of military History this is a must read in my opinion.

History at its best.

Takes you through the years and shows you how tough life was in those times.

A story which is told as caesar him self tells it of his campaigns at the fringes of the empire.

The translation has Cesar refer to himself as "i" and not Cesar. Thats a bit meh, otherwise 10/10