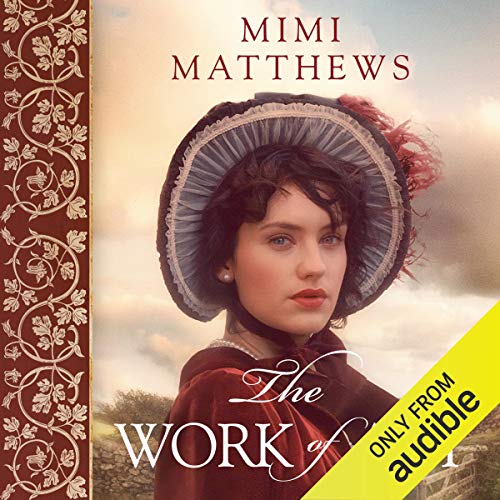 The Work of Art

"Matthews weaves suspense and mystery within an absorbing love story. Readers will be hard put to set this one down before the end." (Library Journal, starred review)

Hidden away in rural Devonshire, Phyllida Satterthwaite has always been considered more odd than beautiful. But in London, her oddity has made her a sensation. Far worse, it’s caught the eye of the sinister Duke of Moreland - a notorious art collector obsessed with acquiring one-of-a-kind treasures. To escape the duke’s clutches, she’s going to need a little help.

Captain Arthur Heywood’s days of heroism are long past. Grievously injured in the Peninsular War, he can no longer walk unaided, let alone shoot a pistol. What use can he possibly be to a damsel in distress? He has nothing left to offer except his good name.

Can a marriage of convenience save Philly from the vengeful duke? Or will life with Arthur put her - and her heart - in more danger than ever?

Perfection. Yes, that describes this story of the heart that won me over quickly. This is the third story by this author I have read and listened to in audible and I truly did not think it could top the others. But I am beginning to understand her writing has so much depth in her characters and insight into the emotions she builds on, I will always read her stories going forward! The narration of Alex Wyndham just brings the characters alive, with all of the angst, emotions and love that makes him one of my very favorite narrators. I could listen to him endlessly.
A lady that needs saving from a marriage to an evil man and a hero who at first thinks he is not good enough for anyone. A washed up wounded soldier who could not possible come to the aid of a lady. But oh, he does and an amazing friendship develops which smoothly falls into a romance for the heart.
A stunning, emotional dance filled with suspense, a marriage of convenience and a sigh worthy couple that exhibit all that is good in matters of the heart. I highly recommend this book and am listening to every audible by Mimi Matthews.

This is was a well written story with characters that have depth. It is like Georgette Heyer minus the comedic relief. I thought this story was kinda sad- melancholy like. I thought it could have been helped with some humor. Both of the main characters are so serious. The story did keep my attention and there were some surprises along the way, I definitely wanted to know what happened next. The narration was ok. He gave the male lead a hoarse whisper which was a bit odd and the way he read the female lead was also bit odd. It had an odd melodic staccato. Overall good and would read books by this same author.

The Work of Art

Loved it. Listened to it twice in 3 days. Alex Wyndham is my favorite narrator.

I liked Phyllida from the beginning. She did seem a bit naive about a few things but she was used to country life and not that of London. I did not care for her uncle at all, nor her cousin Elizabeth. Phyllida has such a big heart and feels things deeply. I loved how she helped Captain Heywood without anyone noticing.
I really liked Captain Heywood! He is a great hero, perhaps a bit too protective at times but his heart was in the right place.
The communication between the characters was excellent. This author writes great communication and great kisses. There are many fun little moments between Heywood and Philly, I loved the last page.

Original premise but could be better...

The Work of Art by Mimi Matthews is her first standalone Regency romance novel, and it is the fourth book I’ve read from this author. I’m thrilled to have discovered MM’s books, she’s a good writer, good storyteller, and most importantly, she writes accurate and well-researched historical romances. For some reason, in the last few months, I keep stumbling upon poorly research HR novels, and when I say the struggle has been real, I mean the struggle has been real. So, it’s always a pleasure to pick up one of MM’s book.

Now, I wanted to give this book four stars, but there were a couple of things that bothered me, which brought the score down to 3.5 stars, and I decided to round down.

I loved the premise for this book, it’s very original in the historical romance genre (I’ve seen somewhat similar concepts in thrillers, but this is pretty original). Which made the first third of this book the strongest part of the whole book. There was a real sense of danger, of fear – whether or not Philly would be able to get away – and the development of the main couple was handled very well. It also gave strong villains/antagonists to the story, they weren’t mustache-twirling, but they were to be feared, which is what you want from a good villain.

I found the development of the MC to be realistic, with a mostly organic progression to their feeling for each other. It wasn’t perfect; I wished she’d allowed them to be married a few weeks, without having them be in love with each other, to allow for a stronger development of their feeling (time/nearness). However, that didn’t hurt their relationship development for me; it just would have made it stronger, IMHO.

One of the things I enjoy in romance is having the couple marry early on in the books. Seeing the development of their relationship after marriage is less common than having the marriage be the HEA. Still, I think it can sometimes be more fulfilling to see a couple work at their relationship after marriage. This helps us know that they’re going to be okay after all is said and done because they’ve worked through one of the big hurdles to staying happily married.

There aren’t too many lowlights, but rarely is a book perfect. It didn’t bother me too much, but I wished that MM had taken the concept of “The Collector” and explored it to its full potential. If you’re going to create strong villains/antagonists that have realistic motivations, don’t abandon them a third of the way through the book. Yes, they are part of the story throughout, but really, we were done with them after Philly and Arthur got married. Maybe it’s just me, but I say embrace the villains/antagonist – don’t be afraid to be “predictable” because if done well, even a predictable story can be great. The fake-out was okay, but it didn’t do much for me.

The other thing that bothered me is the concept – used WAY too often in romance – that if you’re good, you’re stupid. Now, a lot of good people might be naïve, and that is perfectly okay, and it makes sense, but being good doesn’t make you stupid, and it certainly shouldn’t make you blind to the malice of others. Being good is a choice you make, and most of the time, you make it knowing full well there are a lot of shitty people out there. Also, wanting to see the best in people should have their limits. I’m speaking of the heroine here, of course, heroes rarely are stupid or naïve.

The Work of Art is an original, well-told historical romance that I believe most romance lovers would enjoy. MM has a fresh perspective, and I hope she continues to explore different themes with her stories.

I don’t like Alex Wyndham’s voice, and I wish he weren’t the narrator of most of MM’s books. He has a strange cadence to his voice, which makes it sound like every sentence ends with a question. Also, most of the voices sound like he’s doing them in a whisper. But I didn’t take any stars away from MM’s story because of the narrator. Thankfully audible allows us to give separate stars for performance and story.

A Classic in the Making

Wonderful story with perfect narration. This audiobook is a permanent entry on my "go-to" list.

The story was good for the most part, but I found the narrator extremely distracting. He has a way of making everything he says sound like a question.

My heart is a flutter!

Absolutely loved this - especially the open communication amongst the protagonists. Really, it gets “roll your eyes” irritating when there’s so much miscommunication in many of historical romances these days, this is so very refreshing and has the feel of an Austin novel. As for the narrator, he was amazing when he spoke/performed as the characters (especially the deep rasp of the hero) but was slightly monotonous when he was - well - narrating, but a solid performance over all.

Good read! I really liked Arthur and Philly. They were a great couple, him wounded from the war and her caring and loving and terrible bashful. This was good because it was not just a love story but also a mystery. And, I have to admit, I didn’t see that coming at the end.

There was no sex and no swearing. Definitely rated-G.

As to the narration: Alex Wyndham did a very good job. Even though he needs some help with some emotions when he reads.