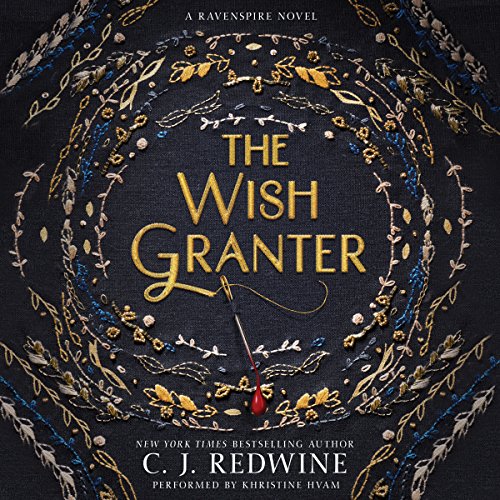 An epic, romantic, and action-packed fantasy inspired by the tale of Rumpelstiltskin, about a bastard princess who must take on an evil fae to save her brother's soul, from C. J. Redwine, the New York Times best-selling author of The Shadow Queen. Perfect for fans of Graceling and the Lunar Chronicles.

The world has turned upside down for Thad and Ari Glavan, the bastard twins of Súndraille's king. Their mother was murdered. The royal family died mysteriously. And now Thad sits on the throne of a kingdom whose streets are suddenly overrun with violence he can't stop.

Growing up ignored by the nobility, Ari never wanted to be a proper princess. And when Thad suddenly starts training Ari to take his place, she realizes that her brother's ascension to the throne wasn't fate. It was the work of a Wish Granter named Alistair Teague, who tricked Thad into wishing away both the safety of his people and his soul in exchange for the crown.

So Ari recruits the help of Thad's enigmatic new weapons master, Sebastian Vaughn, to teach her how to fight Teague. With secret ties to Teague's criminal empire, Sebastian might just hold the key to discovering Alistair's weaknesses and saving Ari's brother - and Ari herself.

But Teague is ruthless and more than ready to destroy anyone who dares stand in his way - and now he has his sights set on the princess. And if Ari can't outwit him, she'll lose Sebastian, her brother, and her soul.

In the spirit of being similar to the Lunar Chronicles, this series has a similar set up. We're following a different princess then in the last book, but we still know that the other one is around and involved. I think it would have been nice to get to have more interaction between the two, because otherwise it doesn't seem like much of a series, just a different book that has a similar setting.

Would you listen to another book narrated by Khristine Hvam?

This reminded me of the Lunar Chronicles (Cinder, Scarlet, Cress, Winter); it was a new twist on a timeless story; with a comparable narrator.

I found the whole story to be very middle of the road. I didn't hate it, but I wouldn't listen to it again, and that being said, I'm not confident that I will continue on with the series.

I really liked how she made the villain ( no spoilers ) out to be a form of mobsters. The use of poverty stricken towns , addicted to his drug ( made from apples WINK WINK) also brings about a realistic subversive tone.
I did like it, but the romance was waaaaaaay loaded in this story as oppose to the first tale

Kept me at the edge of my seat

This novel was brilliant. It made me laugh, get in touch with my feels and kept me at the edge of my seat. I couldn't stop listening. An amazing twist of the classic fairy tale "Rumpelstiltskin".

I absolutely adored this book! It was a great follow up to the first Ravenspire book. Though I do wish the original characters had continued over. I fell in love with these characters and this story with its many plot twists and heartaches.

The Wish Granter is the second in the Ravenspire series and, in my opinion, was better than the first. The negative thing about The Shadow Queen was that the characters weren’t built as to how I like to see them. In the Wish Granter, that was the complete opposite. This book was very character centered and I really enjoyed it. Alistair Teague was such a horrible villain—so evil—I loved it!! Ari and Sebastian’s romance wasn’t fairy tale, it was more reality. Loved that! The narration was superb as well. Overall, this audiobook was very enjoyable and we can’t wait for the next one!!!

Not a bad listen but not great

Overall the story line is ok. Felt like there was ALOT of droning on about how each person felt, and it would repeat it several times. Just wanted to get on with it already. Less about story line and more about how the characters felt through a very short mount of time.
Narrator was very dramatic with ridiculous simple feelings that made it difficult to listen to at times. Otherwise she was good.

I really enjoy these stories!

CJ Redwine's Ravenspire series is dark and light all so many of the right places. Somewhere between Grimm's fairytales and the Disney version sits these retellings, each with its own unique twist. There are some definite surprises and moments that will tear at your heart, but there is light beyond the darkness in this version...although the darkness may not look like you thought it would...

For conservative readers:
There's no bad language and no sexual situations (but there's a pleasant amount of kissing...) in this book. There is some violence and magic and the stealing of souls, which could lead to some interesting conversations about consequences and the value of a soul...I'd recommend this book for readers somewhere starting at the middle school level.

Just read it! Fantastic story, so twisty, and a badass female heroine that will make you cheer so hard!

Khristine Hvam was fantastic. But the writing and the plot suffered for being boring, predictable, anti-climatic and some inconsistencies that drove me nuts.

Would you ever listen to anything by C. J. Redwine again?

I don't think so. Her writing felt amateurish. If I was a young teen, I would like it more. But I've listened to books with more originality, better layered characters and less predictable endings.

Have you listened to any of Khristine Hvam’s other performances before? How does this one compare?

I've listened to 5 of hers now and she's always great. For this one, the dialogue was dragged out slightly too long when she spoke, but I'll still listen to almost any YA that she narrates.

Boredom mainly. I was hoping for a good story, but the pace felt weird, repetitive writing and not enough to draw me in.

If you like more original spins on fairytales, you won't like this one. The pace wasn't what I expected. I also don't recommend this if you're new to retelings. I would do "Hunted" by Meagann Spooner, "Beauty" by Robin McKinley or "The Forbidden Wish" by Jessica Khoury instead.

Better than The Shadow Queen

The second book in CJ Redwine's Ravenspire series is a cut above the first one, it hits the ground running with a brave and clever heroine, a damaged yet determined love interest and one of the most sinister villians I have ever read. Never had I felt such a rollercoaster of emotions when listening to a novel before and I was constantly on the edge of my seat waiting for either a glimmer of hope or for the wave of darkness Allister Teague cast to crash down upon Ari and Sebastian. Redwine also laid ground work for her next story which was incredibly clever and didn't take away from what was unfolding in the Wish Granter. Redwine's writing is magical painting beautiful pictures in the readers mind. I can't reccomend this book enough and can't wait for the next adventure