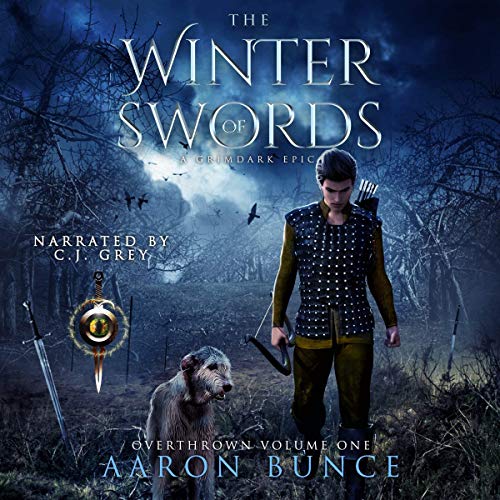 The Winter of Swords

The Winter of Swords

An intelligent, six-limbed beast snatches a girl away from her family.

An orphan confronts the darkness in his past, while a menace stalks his small town.

A young woman cast into servitude tries to forge her own path in an unforgiving world.

And an inexperienced soldier following the path of honor and duty comes face to face with a foe born from his worst nightmares.

Seemingly unconnected, this small group of normal folk will fight to survive, for an ancient evil has awakened, and Denoril will need heroes if it is to endure The Winter of Swords.

An Epic Adventure That Must Be Heard!

Review of The Winter of Swords: A Grimdark Epic by Aaron Bunce, Narrated by C.J. Grey

The land of Denoril has been created by the mind of author Aaron Bunce. Ruled by the Council of Lords, this epic fantasy based in the land of Denoril is mixed with horror and is the start of of planned six book series with three books currently published. As with most things of Epic proportions, this book does not shy away from introducing many characters into the mix. As such, it takes an organized mind to juggle all the balls Aaron throws our way. Much like the elegant weaving of single strands of yarn or thread required to present a full piece of tapestry, an Epic fantasy novel series must also weave the single characters and single story lines together. In the end, the hope is a finely crafted picture of a story that feels like it must be told. This is exactly what we are getting when diving into Denoril and the Overthrown world created by Aaron Bunce.

The audiobook version of The Winter of Swords is performed by the talented narrator C.J. Grey. C.J. does his job masterfully of presenting the unfolded tapestry Aaron has started for us. This tapestry, while unfinished, presents a beautifully told story that has us just beginning to see the images and layout that Aaron plans to send our way. C.J. has a vast array of character voices and breathes lives into the characters.

Fans of J.R. Tolkien, Robert Jordan, and George R.R. Martin are going to grasp on to the words of Aaron Bunce and usher in another Epic adventure series that can’t be missed! I am really looking forward to the release of the next audiobooks in the series: Before the Crow, and A March of Woe.

While the last three planned books of the series is not currently released, it doesn’t mean that we have to wait for more of the Overthrown world to come out. Thankfully, Aaron has started writing a companion series Overthrown: The Chronicles of Denoril which takes place ten winter thaws before the start of the The Winter of Swords and expands the Overthrown universe while introducing all of its fans to new characters and younger versions of some of the ones we have come to know. The first of this series is “The Delving” which you will definitely want to pick up and read or listen to once it releases in audiobook format.

Overall, a wonderful start to a world built to provide hours of entertainment and edge of the seat moments. Already an immediate fan of both author Aaron Bunce and Narrator C.J. Grey.

First, a confession. I am not into grimdark fantasy novels. Give me hopeful escapism any day over the bleak, violent, and dark stories featured in most grimdark novels. Don’t get me wrong, I like good action, and gritty realism and violence, but most grimdark novels are too violent and too depressing for my taste. I don’t seek out grimdark novels to read for the above reasons, but I had a chance to meet Aaron Bunce at an author event recently and I was lucky enough to win an audiobook copy of The Winter of Swoards, and while I don’t think this one book will change my mind about a whole genre, I will say that I enjoyed this story.

Aaron does a great job in two areas: characters and setting. The setting is real and gritty, a low-magic world (there are divine healers, but not any powerful wizards and the like) where the great kingdoms of man and dwarves have vanished and the remnants of the human kingdom struggle for survival. Things have been peaceful, but as the novel starts you realize that the monsters that hide in the shadows are starting to stir.

The Winter of Swords is an epic fantasy, so we follow multiple character arcs in the story. What I like is that each of the characters are common, ordinary people thrown into unexpected situations. These are not mighty warriors, kings, and queens, but normal people struggling to get by in an unforgiving world. As the story progresses, we learn more about these characters, their own secrets, and the fates that await them.

I do have a few quibbles about the story. Aaron is very detailed and descriptive in his settings, characters, and the action. Good to a point, sometimes I felt that there was too much description that slowed the pace and action, especially in scenes that should have been fast-moving. The descriptions were good, and fit the character and scene, but it sometimes felt I was slogging through mud to get through the end of the scene because of them. The other quibble I have was the plethora of what seemed like ancillary characters to me. There were some characters who popped in midway through the book for a couple of chapters, then the disappeared again. They did not contribute to the story of the main characters we’d been following, and even if their story was important to a larger story arc, it was distracting and again, broke up the pacing of the story. (Also, I felt that the stories presented in these brief flashes were left unresolved, and that in itself was distracting and left me feeling unfulfilled.)

If you enjoy grim fantasy filled with violence and despair, in true grimdark style, and if you like a grand epic fantasy with complex characters and a storyline that weaves between them, then you will enjoy The Winter of Swords. I may not pick up other grimdark novels, but Aaron has done a wonderful job of weaving this story together that I will be interested to see what happens in the next novel.

The audiobook was narrated by C.J. Grey who did a fantastic job of bringing the characters and setting to life. He is a master storyteller who makes each character distinct, and his inflections and tone helped to heighten the tension in all the right places. There were no problems with the performance by Grey, or in the audio quality.

Mind-blown. C.J. brought this amazing story to life in a new way.

Bunce can weave a story that makes you feel as if you're right there in the book, going through every single thing his characters go through. You can feel their pain, their anger, their love, their fear, you get the drift? Right?

The descriptions of the beasts are so visual, it's like bam, there they are, right in your face where you're hoping they don't come looking for you in the night.

The characters have such depth and personalities. You're bound to love some and hate others. You're going between three different stories and it brings so much to the book. So many plots and twists, you think you know what's happening and you've figured it out, bam, you've not a clue.

I could ramble on more about this book but I'll leave it up to you to listen to it. You can't go wrong. It's absolutely freaking amazing. Mind-blowing.

I'm not sure why the first reviews of this book are so harsh. The story arc of this series is obviously very long and this first volume is setting the stage and introducing characters. Yes, you may be lost at times, but long stories typically don't have a lot of closure occurring in the first book.

I thought the writing was very well done with great imagery. If you're looking for a story that requires zero thought and is served up complete and wrapped in a bow, this isn't it. I found the beginning of this tale intriguing and am hoping volume two comes out soon.

The narration was exceptional in my opinion. Clear with good flow and a ton of emotion.

Setting of the world

This book is the first of the series and as many first fantasy books, the world is being set and characters introduced. We get to start the journeys of multiple characters in multiple parts of the world. Some things are still hanging out there and I am sure they will intertwine at some point but they haven't yet. I'm interested to see where this goes.

*I requested this book and am voluntarily leaving this review

A great fantasy read, even better on audio

I had the honor to read this book and I enjoyed it. Then I decided to try it on audio. I'm not big on audiobooks but never the less I decided to give it a go. The narrator did a great job enhancing the story. I look forward to more from Aaron Bunce and the narrator.

Not for me. You gotta give new things a chance, right? I tried. But no.