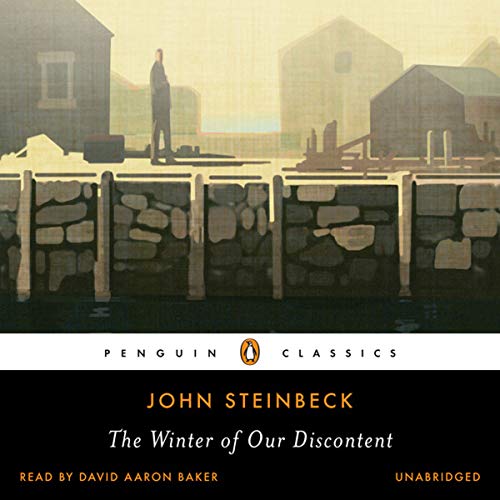 The Winter of Our Discontent

The final novel of one of America’s most beloved writers - a tale of degeneration, corruption, and spiritual crisis.

In awarding John Steinbeck the 1962 Nobel Prize in Literature, the Nobel committee stated that with The Winter of Our Discontent, he had “[R]esumed his position as an independent expounder of the truth, with an unbiased instinct for what is genuinely American”.

Ethan Allen Hawley, the protagonist of Steinbeck’s last novel, works as a clerk in a grocery store that his family once owned. With Ethan no longer a member of Long Island’s aristocratic class, his wife is restless, and his teenage children are hungry for the tantalizing material comforts he cannot provide. Then one day, in a moment of moral crisis, Ethan decides to take a holiday from his own scrupulous standards.

Set in Steinbeck’s contemporary 1960 America, the novel explores the tenuous line between private and public honesty and today ranks alongside his most acclaimed works of penetrating insight into the American condition.

John Steinbeck? Are you kidding? I just wish it were twice as long.

Which character – as performed by David Aaron Baker – was your favorite?

Baker does a great job of bringing each character to life, distinctly voiced and infused with individual emotion. Very easy to listen to.

I'm giving this audiobook three stars instead of five because of Audible's sloppy, shoddy editing. Words are clipped off at the end of chapters, and there are jump cuts where the words have been lost. This poor quality work is a gross disservice to a master writer like Steinbeck, and to the paying customer expecting a professional, unabridged product. Get your act together, Audible!

Age old question. Can a person have a shifting moral compass and still be a good person? Decent narrator but the production quality was awful. Chapters end abrubtly.

Love this book!! I’ll be listening to it again.

Issue: the ends of some of the chapters are cut too soon and may be missing some of the words entirely.
A re edit is needed

Short of reading the book itself, few words can justly capture the masterful command of the English language and narrative of human experience Steinback demonstrates in this book. To express the cognitive process and self awareness of a protagonist such that he and the reader become one in a literary world, and yet, stay true to the character's nature is inexplicably difficult, and Steinbeck does so effortlessly. The author has earned his place among literature's greats and even that might be selling him short.

Do the Ends Justify the Means?

Where does The Winter of Our Discontent rank among all the audiobooks you’ve listened to so far?

I love the book and really enjoyed listening to this audio versions.

It is a classic snapshot of society. Though the story is 50 years old people still value position and money in society in the same manner.

What about David Aaron Baker’s performance did you like?

He did a great job with the voices.

If you could rename The Winter of Our Discontent, what would you call it?

Revenge for the Belle Adair

Much to Lean About Life When Steinbeck Writes

The Winter of Our Discontent, written by: John Steinbeck, and narrated by: David Aaron Baker. In this magnificent work of art, Steinbeck provides us a tableau to consider materialism. He does so by asking (through his characters problems and resolutions); what is right and what is evil, where do I stand in the scheme of things, and how do I make it through life, given the evils that lay in wait of my efforts to do good. If I can prevail? Is there such a concept as prevailing? All this wonderful metaphysics arises because Mr. Steinbeck, needed a setting from which to criticize the materialism that pervaded North America in the 1950s and into the early 1960s.

Our hero is, Ethan Allen Hawley, a scion, from a New England (actually eastern Long Island), whaling family of renown. He has been unfortunate in that his family wealth was lost by his father and he now suffers the shame of lower middle class. As a grocer in a store he once owned he earns just enough to make it through life but no money for anything else. Opportunity comes to Ethan, if he is willing to forsake his values. Steinbeck though does not lead us directly into a binary choice. Do wrong or do good. Ethan takes off on his own scheme against the good and the bad. How it works out makes for a good story that marvels the metaphysical mind.

Does this story involve the reader? Yes. As all Steinbeck’s involve the reader. He is a master and this, his last novel, may be among his better works. Mr. Baker, delivers this difficult experience in perfect tone and cadence.

Engaging, entertaining, mysterious. The direction of the story, well told and well read, was unpredictable and layered. Steinbeck was a most excellent writer.

Steinbeck has a BEAUTIFUL mind. He makes me think, and cry. He is masterful -- telling stories through rich and interesting characters. He illustrates the hard parts of life by showing us how we feel when those things happen. He makes the reader question their own responses to the things that happen around us. He shows us how we feel about prejudice (like in The Grapes of Wrath), poverty and homelessness (like in Of Mice and Men), and even family discord (like in East of Eden). He is a man that I wish I had known... I have a literary crush!

The Winter of Our Discontent is his last book. Thankfully though it is not my last book of his. I have at least 8 or 10 more to read. And, I know that I will revisit many of them many more times.

Update -- reread Jan 2020. I found the book to be even better on a second read. This time I really picked up on the details of life in the time and place, and I got into the thoughts of Ethan more.

This book was excellent and the performance was top notch as well. My only critique is in the editing of the audiobook. On several chapters there was basically no gap between the last word of the previous chapter and the announcing of the new chapter. It made it feel like the listener had skipped ahead and it didn’t flow well at all. For such a classic book and lovely performance by the narrator, I found this editing error to be annoying and have a hard time understanding how no one in the editing department caught and corrected this before release.

Beyond the less than perfect chapter transitions, this audiobook and its performance were a joy.

This is my favorite of Steinbeck's works. The narrator is great. The production would be perfect if one or two seconds of silence was left at the end of each chapter.