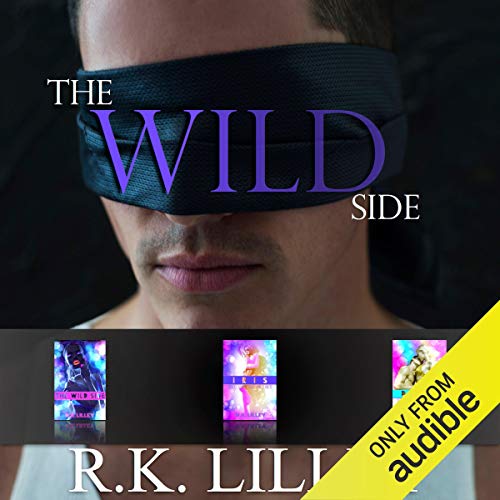 The Wild Side Trilogy

Alasdair Masters is in a rut. He just hit forty and has been nearly celibate for the past year, and his life has turned into a daily sequence of lonely patterns that revolve around avoiding human contact.

His tidy life is turned on its head when a hot, young blonde at the gym who's been pseudo-stalking him decides to rock his world. A very young blonde. Way, way too young for him. The problem is he can't seem to tell her no, and she just keeps coming back for more.

It doesn't help that he's 90 percent sure she's a criminal, and still he can't seem to turn her down. What is a dull introvert to do when a chaotic cyclone that oozes sexuality comes twisting into his life?

At first he thinks she'll give him a heart attack, but after his twenty-year marriage ended a year ago, he's been a little lost, and when she comes crashing into his life, he realizes that he's never felt more alive.

Is a walk on the wild side just what he needs to get his life on track or a disaster in the making? Is it possible for someone that much younger to be just what he needs, or is she a fortune hunter, as everyone keeps telling him? Is it his hormones telling him that the mysterious younger woman is the one, or could it be more?

As the very young, very beautiful Iris comes into the handsome, rich and successful forty year old Author Alasdair's life you could understand his hesitancy, vulnerability and hope filled desires after all life had bestowed on him a wife (now ex) from Hell who had given him nothing but low expectations and disillusionments. Then, like a moth to a flame, he is drawn in by this beautiful creature who shamelessly seduces him and awakens the sexual beast in him and the more he has the more he wants of her and only her.... his Iris.

But she is an enigma, his lover but a stranger, a mysterious puzzle that he just can't understand or trust because she gives him nothing, nothing but secrets, lies and disappearing acts but still he longs for her touch, her body and the all consuming connection they have formed for each other which borders on obsession but he doesn't care. Alasdair is tortured about the age difference, the mystery and suspense surrounding Iris and the words of love she gives him over and over again but his ever growing curiosity to know the real Iris, and his suspicions that she was an unwilling pawn in an unknown game, made him desperate and desperate men do desperate things..... but so too does desperate women.

Wow, this is a book like no other book I've listened to, it carries you along in their obsession for each other, through their sexual escapades and your mind is constantly whirling as to who Iris is, what does she want, why is Alasdair doing this to himself, who is the stranger that is always around. So many questions then the mystery and suspense takes an even deeper more sinister turn which still leaves you clueless but glued to every unfolding Chapter, Chapters of lies, drama, wild and frantic sex, disappearances, reappearances and, despite it all, the feeling that they deeply loved and deserved to overcome it all. But you, like Alasdair, are clueless and are swept up and carried along in the unfolding story just waiting for answers to all the questions that have built-up until finally, finally you reach the beautiful end of a spectacular ride.

Told strictly from Alasdair's confused POV, there were a few other characters but the spotlight shone directly on Iris and Alasdair's affair and the narration was spot on..... in the depths of Hell one minute then in orgasmic Heaven the next Jason Clarke nailed and rocked it.

Worth a credit? If ever there was a book that was worthy of a credit it's this one.... the writing skills of RKL, the build-up, the suspense, the love story (hot sweaty sex an all), the reveal and the heart stopping HEA were all just perfect. So yeah, worth a credit and I'm eagerly looking forward to her next book relating to characters from this Trilogy.

I don't have time to break this down for my followers but this was a hot fucking listen. You don't need to know anything but this is the luckiest man in the world and this chick is getting a strong older man that does not need Viagra. Oh yeah it also very suspenseful and mysterious👌🏾👌🏾👌🏾👌🏾👌🏾👌🏾👌🏾

Hard to buy into the story

It had an interesting ending but it seemed more like a teenage boy's dream come true. It just took too long to hook me.

Loved The Wild Side!

R.K. Lilley is amazing once again. The narrator did a fantastic job as well with the delivery of this great story!

This has to be one of the best books I've ever listened to. I will only get an hour of sleep tonight b/c I couldn't turn it off. R.K.L. is an auto DL already, but this is by far my favorite of them all! It was the perfect mix between erotic and suspenseful romance. In the beginning, I thought it was going to be a shallow story filled with sex and nothing else, but I'm so so glad I gave it a chance! It turned into a raw, intense, deep, love affair that seemed doomed from the start, but the HEA ending was as much a shock as a great relief. Okay enough, just add it to your cart! Absolutely credit-worthy!

Captivating, sexy, suspenseful and completely overwhelming (in a good way). The narrator has a very NICE and sexy voice. Though the name is off I totally said "hey this is Christian Fox (from the heart of stone series)", looked at the name and was like hrrrmm maybe he has pseudonym but for his voice work.

Either way this was a wonderful escapism and thoroughly enjoyed it being completely from his pov.

Why is this not a movie!!! what a great love story and intricate mystery! narrator is fantastic!!

I tried. I really did.

The storyline was utterly absurd. I tried to listen and almost made it through the third book simply because narrator Jason Clarke is good. But this had to be the biggest waste of my listening hours that I've ever experienced.

RK Lilley does it again. it is really hard to get me to drop my jaw to the floor. but she has done it again. from beginning to end the plot twist & turns that are taken as we grow to love & root for Dair & Iris. The Trilogy is one of my favs especially with the smooth narrations of Jason Clarke.

looking forward to the next in the series.