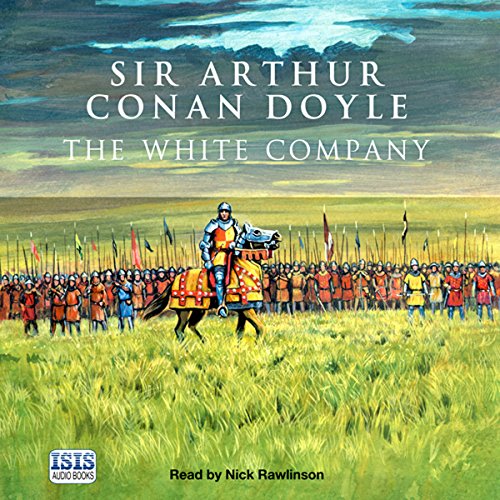 The White Company is a motley group of English mercenaries, fighting under the leadership of Sir Nigel Loring. Bound by an unquestioning respect for social order, patriotism and a lust for adventure, the company makes its way to France to fight in the local wars. With assiduous attention to historical detail, Conan Doyle paints a convincing picture of the chivalric life and manners of the 14th century. With a fresh, concise style, this is a robust and stirring tale of adventure with the spirit and humorous touch of a Chaucerian raconteur.

I had high hopes for this audiobook: the author of Sherlock Holmes writing a historical adventure featuring a mercenary company of bowmen during the 100 Years War between France and England! It's really an episodic Bildungsroman about Alleyne Edricson, who at age 20 must leave his cloistered abbey life to experience the big world outside for a year so as to be able to make an informed decision about where he'd like to spend the rest of his life, abbey or world. He immediately meets two boon companions, John, a red-haired giant (reminiscent of Little John) and Aylward, a veteran bowman of the famed White Company. John and Aylward are full of lusty life, eating, drinking, wooing, and fighting with gusto, while Alleyne is an appealing protagonist: innocent, kind-hearted, loyal, and brave. And many of the scenes are exciting and or funny and or interesting, informed as they are by Doyle's detailed research of and enthusiasm for 14th century warfare and life. And he doesn't ignore the complexities of human nature, showing, for example, the same man bragging about the fancy goods he's pillaged in France and then resenting being conned out of a few coins for some ersatz holy relics.

The reader, Nick Rawlinson, delivers a fine performance, changing his voice effectively for different English accents, as well as for Italian, French, and Spanish ones, whether the voices of women or men or of conniving and sadistic lords or open-hearted and open-handed chivalrous heroes. He's even good at singing the several rough country or mercenary songs scattered throughout the book.

Finally, I had hoped for a more tightly constructed story. And I wonder at the honor and fame seeking chivalry that has Sir Nigel more than once leading his men to avoidable and horrific battles. Are these the virtues and men that Britain may be in sore need of again some day, as Doyle opines? But let that pass: the book is an enjoyable romp through the 14th century British, French, and Spanish countrysides

The narrator Nick Rawlinson made this great old book of knights and chivalry very enjoyable. His ability to sound the various accents both male and female is astounding.
This is the best 13th century tale I know. I am lucky to own one of its early printed editions which will be fun to read again despite the small print in the hardback.

Before I begin, let me just say that I have read nearly all of Doyle's works, and none of them can compare to this story - not even Mr. Sherlock Holmes.

In The White Company, Sir Arthur Conan Doyle writes with such poise and passion, such vivid imagery of the doings and chivalry of the Hundred Year's War, and with such attention to historic detail so as to simultaneously rend and excite your heart at every turn of the page. He shows the true mastery he had over pen and ink in this novel. I would wholeheartedly recommend this novel to any avid reader, lover of history, and to any person who is looking to be transported back to that bloody, brutal, and honor bound age of knights and squires, kings and queens.

I can see why Sir Arthur Conan Doyle was proud of this work. Wonderfully done and delightfully light. Loved it

A pleasant, often thrilling, and always delightful romp through the age of chivalry. Old in style, it is more a collage of adventures, one thrilling, romantic, or humorous encounter to the next, than it is a driving plot culminating in a long anticipated confrontation with an antagonist. If you are ready to make fast friends with a delightful cast of characters as they embark on their journeys, quests, and advancement in honor, this one is for you.

Doyle presents a world where honor, respect and love of God reigned. He does not, however, shy away from the uglier aspects of the age, like the I'll treatment of peasants / serfs, or some personalities in the Church taking advantage of their authority. I believe, however, the overall image presented is fairly balanced. You can tell he had a bit of a grudge against the formal Church, but I believe he also shows some respect for it.

The performance by Nick Rawlinson was lovely: varied and versatile, well up to the task. The only issue with the production is that the Audible chapters did not match up to the book chapters, making it sometimes difficult to know where you are. Otherwise, an absolutely wonderful "read". I feel a bit melancholy at saying goodbye to such warm new friends. I may have to give Doyle's "Sir Nigel" a go. Enjoy.

Ma foie! By my ten finger bones, from Hampshire to Navarre and back again, ye will not find a fairer tale of chivalry, plight, daring, et l'amour!

“Shall they not muster at her call.”

Sir Arthur Conan Doyle is by far the most clever author ever. How is it that in the last paragraph he predicted in 1922 how England would win World War II? Here is the quote ... “Let us pray to God that we may ever hold their virtues. The sky may darken, and the clouds may gather, and again the day may come when Britain may have sore need of her children, on whatever shore they may be found. Shall they not muster at her call.”

I had read this book (and Sir Nigel) 20 years ago and enjoyed them greatly but being able to listen to the books being read with all of the difference accents made them that much better.

Vivifying performance of an overrated juvenile

A young-adult historical adventure novel that I might have enjoyed more if I'd first read it as a kid. As it was, I found it acceptable but only rarely gripping or absorbing; what held my attention was the vital and versatile performance by Nick Rawlinson, whose virtuoso rendering of innumerable regional and national accents, distinctively individual voice characterizations, and zestfully-paced storytelling convincingly galvanize what for me would have been a semi-moribund, strictly juvenile classic.