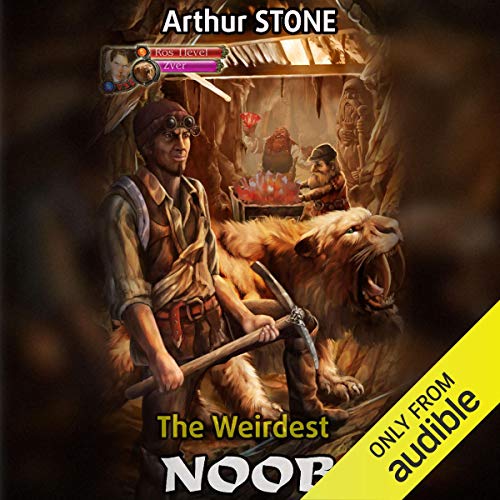 Something quite odd is happening in Second World - the planet's foremost MMORPG. Something that's causing alliances to be broken, and friendships, forgotten. A worthless low-level mine becomes the stage of vicious battles, its burned ruins suddenly contested by the game's toughest clans. Every border is controlled, and every road in the province blocked off. The weak players and NPCs alike are subjected to non-stop violent raids courtesy of Eastern invaders. And the strong...the strong are scouring the virtual world for the culprit - the weirdest noob the game has ever seen.

Turned out to be worth it

Oh. My. God. was this book ever insanely annoying to start. Painful to listen to for the first few hours b/c of how ignorant the MC is. Also, the word noob is used like the Smurfs use the word smurf. Really obnoxious.

But once that's over with the story really picks up and you get your money's (or credit's) worth and don't feel cheated.

The narration is ridiculously mediocre. It's not terrible to listen to but he's not that great either.

Half to almost 2/3 of the book is boring

Collin did Ross voice exactly like his normal voice as he read everything not another characters voice. Very annoying and unprofessional. The plot being dry and the author repeating status and location scripts dozens of times only paragraphs apart. This was a highly unbelievable and terrible book to suffer through. While it had moments of creativity and a novel world view. Ross the MC is too stupid to survive and the tricks he used were not possible when you tell me that there are over 400 million players and the game has been around for years. The exploits and way Ross became a hero and raised a 100plus level undead as an Level 0 character is nonsense.

I can not recommend this book or author to anyone.

Seriously! I gave myself several headaches while listening to this book with all of the facepalming I did. I don’t think this author has EVER played an online game. It seems like he just read a couple of litRPG books and thought “Hey, I can do that too!”. This is obvious by the BLATANT PLAGIARISM in this book. The main character ends up mining in a cave and I started to get a familiar feeling about the events that happened. I then found several reviews for the Kindle version of this book on Amazon that details the plagiarism pointing out that the mining sequences were lifted directly from The Way of the Shaman series (which I have read).

Next, what’s with the character naming? It looks like the author said “Your name is…..” and then banged on the keyboard 3 or 4 times, and viola, a character name. Which, it turns out was completely pointless as the characters all go by alternate names….

The writing is juvenile. The first 5 hours of this book felt like a badly done training video you watch when you get your first job at a fast-food restaurant. “Johnny’s First Day Online!”. We don’t need the PAINFULLY detailed explanation of what an NPC is, or what mana is, or how stats work, or the 20 minute explanation of how “if you kill something lower level than you, you get less XP”.... SERIOUSLY? 95% of the people reading this book will have played an RPG game before and know what this is, so I really don’t see why the author feels he needs to explain it like we are all 5 and have never heard of this world before.

The MC is also a complete moron. “How do I level up cooking?” “How do I raise my stats?” “What are buffs?” Again, it feels like the author JUST learned about all this himself and thinks no one else knows anything about it so HE needs to explain it. His arrogance is furthered by the overwhelming amount of $12 words (perturbations, remuneration, eponymous, beatifically just to name a few)… it feels like he sat down with a thesaurus and changed as many words as he could to make himself sound smart.

The conversations feel forced and scripted with no flow. Listening to the conversations of this book I felt like I was playing a video game during one of those long “info dump” scenes where the player has options of what to ask and the NPC explains that item in detail, then you move to the next question on the list with the new topic having nothing to do with what was just said. Every single conversation was done this way, there were many times I had to pause the book just to take a break from it.

Also, as almost every other review has said… the “noob” is WAAAY overdone. Does anyone have a kindle version of this book? If so, can you PLEASE get a “noob count”. I am betting it’s at least 500 (the book is only 409 pages). This just proves the author has never played a game before. Seriously, every single person he meets as soon as he enters the game calls him a noob and then makes some reference to his mom….. Ya, cause that’s what every single person online does….. “Hey, I’m new here, can you give me directions?” “Cram it NOOB! You’d better go to bed before your mom spanks you for being up late”.... Every...single...time. *facepalm* Along this same line… people don’t say “I.R.L.” when they are speaking…. That’s meant for text. So why does every single person in this game who refers to real life say “IRL”? It had the “school counselor trying to be your buddy” tone to it.

Then there is the narrator. His voices were hardly different, and his MC voice was no different than his regular voice, so telling the difference between speech and narration was really difficult at first. But that’s not the worst part. The worst part for me was the slurping breaths he would take. I haven’t seen anyone else mention this. He would take quick breaths between lines and I guess would lick his lips to keep them moist, which I don’t blame him for, but back away from the mic please. It’s not loud or anything, but if something like that bothers you (like it does me), it’s all you hear.

What a noob. You're a noob. Such a noob. Noobs like you are too noobish to do even the noobiest of tasks that normal noobs can do. Quit noobing around. Stupid level 0 noob.

Seriously, the word noob is horrifically overused during the first five hours. There are several words that could replace it just fine and NOT detract from the story or dialogue. How many times can one person call another a noob in the same conversation?

Most of the characters seem to have a lewd quality about them, aside from the main character, and treat people of lower level with complete disdain. This definitely gives the world a different feel and creates a cutthroat environment. It seemed that only a select few players are decent people and the NPC's were also well mannered as games usually make them out to be.

A confusing aspect of the game is the prompts. I was lost several times because the prompts we're too similar and it sometimes sounded like a single prompt was read like six times for a specific achievement.

The world was slowly being built up throughout the book and the fact that people worked to convert in-game currency to real money made it that much more interesting. In-game slaves? That's pretty cool. An unstoppable bugged NPC called Bug? That's also pretty cool. Dude gets a sex change?? Okay...what a twist! I give the book an overall of four stars because I enjoyed the story so much and I wasn't going to let the word "noob" influence my review heavily.

hated the start then got better

the beginning was like stereo instructions. the repetitive noob rant felt like the writer had never actually played a mmo no one talks like that out side bad made for TV dramas. after that the story picks up and it becomes a hell of a ride

i can not decide what was the most painful aspect. was it the narrator's monotone droning or the fact that virtually the only difference between character voices is cadence and differentiation is nigh impossible in most conversations. but no the worst part was how apt the name of the book is. the first 4 hours are the worst most in painful depth explanations of the utter basics of any rpg/game. I don't need 4 hrs of explaining what buffs are nor what durability could mean or how stats work. I haven't finished and am already reviewing. I never skip anything but I've passed by whole chapters due to the monotonous explanations. there is also a section on pooping in a VR world that is so dull boring and uninteresting that even a mob of 12yr old boys wouldn't bother cracking a grin at.

Over used noob. I get it, he doesn't know anything

I can't handle it. Noob is not that entertaining of a word. To hear it a dozen times from the moment he entered the game was enough to make me question why I like this genre.

Not bad. Slow to start, and loses track at the end

The story was decent, and actually quite gripping in the middle. The last chunk lost me though (but by that time I'd already purchased the sequel, so I'll go through it as well). Worth mentioning though was the narrator. Everything seemed to be enunciated and emphasized as though every word was of extreme importance. It was off-putting from the beginning, though not a deal breaker. Kind of in the vein of Jonathan Yen's narrations, though some people do like that sort of thing.

best book I've enjoyed in a while!

so good I had to leave a written review

You know I really hated this book at the beginning. I mean this would be a great book for someone unfamiliar with rpg games, but to me he was just so noobishly noobie. lol. But you must remember the title. So by the end of the book you are striving for more story. I thought it was well thought out. So yes a good addition to the lit RPG series.