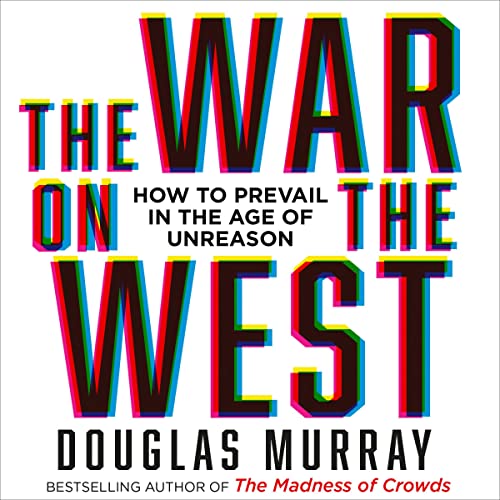 The War on the West

‘The anti-Western revisionists have been out in force in recent years. It is high time that we revise them in turn…’

In The War on the West, international bestselling author Douglas Murray asks: if the history of humankind is one of slavery, conquest, prejudice, genocide and exploitation, why are only Western nations taking the blame for it?

It’s become perfectly acceptable to celebrate the contributions of non-Western cultures, but discussing their flaws and crimes is called hate speech. What’s more it has become acceptable to discuss the flaws and crimes of Western culture, but celebrating their contributions is also called hate speech. Some of this is a much-needed reckoning; however, some is part of a larger international attack on reason, democracy, science, progress and the citizens of the West by dishonest scholars, hatemongers, hostile nations and human-rights abusers hoping to distract from their ongoing villainy.

In The War on the West, Douglas Murray shows the ways in which many well-meaning people have been lured into polarisation by lies, and shows how far the world’s most crucial political debates have been hijacked across Europe and America. Propelled by an incisive deconstruction of inconsistent arguments and hypocritical activism, The War on the West is an essential and urgent polemic that cements Murray’s status as one of the world’s foremost political writers.

My need for arguments against political correctness, CRT and woke craziness finds a great resource here. While a lot of it is based on things happening mainly in the USA, it clearly is being copied in other western countries and so makes this work broadly applicable to anyone wondering if this is the end of the line for the West. Spoiler alert: it is not.
Douglas has a pleasant voice , the production of this audio book benefits from it.
If you think or even worry about the ideological contest in the world now, this book comes highly recommended.

Douglas Murray is by far one of the best political journalists (if not the best) of our time. If you are looking for an eloquently and honest account that tells it like it is, this is the book to read! Well researched and wonderfully written.

Powerful Analysis of the Culture Wars

This is a devastating indictment on the resentful, vengeful, and blinkered culture war being waged on Western civilization. An erudite analysis of what's at stake in the culture wars and an elegant, yet devastating, exposition of the dishonesty, double standards and pettiness of the woke cultural forces at play.

Although I politically disagree with Murray, he provides a comprehensive and informative piece of writing about contemporary society. I think this book should be read by everyone, especially those on the left that oppose a lot of Murray’s views. He is obviously an intelligent thinker and is someone worth reading and listening too.

We need more heros like Douglas to start stepping up and challenge and rectify this age of unreason.

Will be a classic

Free society navigating into the future through introspection such as this woke wave usually finds the optimal path. Without introspection the path is blind

Well researched and argued, with an impressive reach, as Murray's books tend to be. One can only hope that today's reverse racism will be a passing phase in our civilization's development, though it's legacy will surely taint our progress for years to come.

My only reservation about the book is that the writing and reading styles are rather melodramatic, but this is a subjective view.

Murray's work and effort in enunciating the frustration many people feel is wonderful. it is a piece of thought that will, in years to come, be seen as one of the first serious intellectual push back on the inhuman, politics, and bigotry cloaked in the pretense of justice.

Facts do not care about your feelings

Douglas Murray is spot on in this, showing the hypocrisies of the idiotic woke group

Murray is, without a doubt, one of the greatest minds alive today, publishing masterpiece after masterpiece.

If the West ever manages to escape from it's madness, it will be in part because of books like this.
No one sees and writes like Douglas.
He dissects the madness we see all around us and highlights the irrationality of it all and points to the root reasons.
Murray is as usual, meticulous, profound, educational, up to the minute and of course wonderful to listen to.

I hope it wakes some people up because if we allow these maniacs to continue, our children will be poorer for it in every way.
Speak out today before they come for YOU.