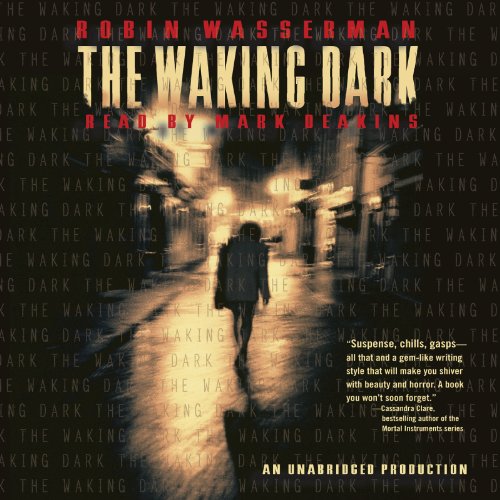 A taut, haunting listen, The Waking Dark is "a horror story worthy of Stephen King" (Booklist) and will appeal to the readers of Gillian Flynn and Rick Yancey.

They called it the killing day. Twelve people dead, all in the space of a few hours. Five murderers: neighbors, relatives, friends. All of them so normal. All of them seemingly harmless. All of them now dead by their own hand…except one. And that one has no answers to offer the shattered town. She doesn't even know why she killed - or whether she'll do it again.

Something is waking in the sleepy town of Oleander's, Kansas - something dark and hungry that lives in the flat earth and the open sky, in the vengeful hearts of upstanding citizens. As the town begins its descent into blood and madness, five survivors of the killing day are the only ones who can stop Oleander from destroying itself. Jule, the outsider at war with the world; West, the golden boy at war with himself; Daniel, desperate for a different life; Cass, who's not sure she deserves a life at all; and Ellie, who believes in sacrifice, fate, and in evil. Ellie, who always goes too far. They have nothing in common. They have nothing left to lose. And they have no way out. Which means they have no choice but to stand and fight, to face the darkness in their town - and in themselves.

"Wasserman ( The Book of Blood and Shadow) delivers an exceptional horror novel that will lead to inevitable (and deserved) Stephen King comparisons.... The novel works just as well as mainstream horror as YA, and the ending is both effective and brutal." ( Publishers Weekly)
" The Waking Dark is a horror story worthy of Stephen King... It's a violent, edgy, well-written, and foreboding novel, so realistic that readers can only hope it’s simply fiction." ( Booklist)
"Great dialogue and intriguing subplots add to the action-packed story, which will have readers frantically flipping pages. Wasserman sustains a truly spooky mood throughout, and the suspense doesn’t let up until the final pages." ( School Library Journal)

Holy Crap this book is intense.

This book was relentlessly brutal. Very Stephen King -esque. I truly loved every minute of this intense novel.

I Suspect this is a YA Novel

What would have made The Waking Dark better?

The more I listened, the more I began to suspect that this was a YA novel. Although I knew it was about a group of teens when I purchased it, I thought it was a standard horror novel because there was nothing in the description to indicate that it was for YA. However, as the story developed, it began to seem that the language, the descriptions...everything seemed "dumbed down." I hated it. It wasn't a bad story...I just don't think it was a book written for adults.

Has The Waking Dark turned you off from other books in this genre?

He wasn't bad, he just wasn't great. I've heard him read other books and his performances were much better. I think it was the material.

I'm very disappointed in Audible this time around. If this is, indeed, a YA novel, it should have been clearly presented as such.

Filled with dark suspense and "The Walking Dead" feeling. You don't know who will survive in the end, surprises at every corner, and real mind-f*cking. You don't know who to trust. Everyone is looking for help but these teens are left to save them selves or die. Fantastic and I'm excited to see what's next for this author. I felt pulled in from the very beginning.