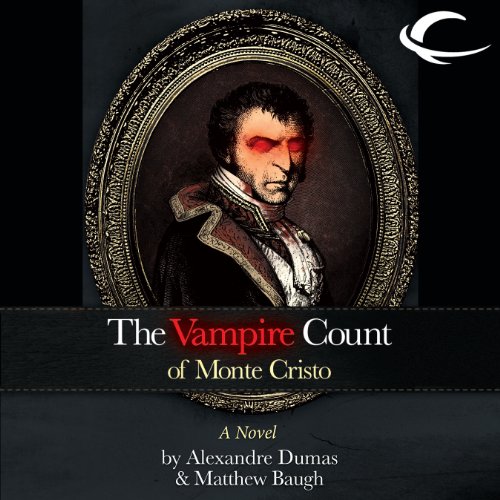 The Vampire Count of Monte Cristo

1815 - Marseille Edmond Dantes is young, in love with the beautiful Mercedes, and has just been named the captain of the merchant vessel, Pharaon. It seems as if there is nothing but happiness and prosperity in the young man's future. Unfortunately, Edmond's success has brought jealous enemies. Danglars wants his career and Fernand wants his fiancée. The two conspire against Edmond and frame him for treason.

He is brought before Prosecutor deVillefort, who recognizes his innocence. Unfortunately, the Prosecutor is a man with his own secrets and he fears that freeing Edmond could bring them to light. He convicts Edmond and has him imprisoned in a dungeon from which no man has ever escaped.

1830 - The Château d'If After fifteen years in his tiny cell, Edmond nearly loses his sanity. Then he meets a fellow prisoner, the brilliant scholar and mystic Abbé Faria. The two become close and Faria teaches Edmond languages, science, philosophy, and sorcery. Using his occult skills of divination he reveals the conspiracy. Faria hopes the revelation will give Edmond a sense of peace but instead it fires his desire for vengeance.

When Faria falls ill and dies, Edmond breaks his promise to his friend and turns to the darkest form of magic. He makes a pact with an unspeakable entity to help him escape and give him the power to destroy his enemies. Edmond Dantes dies in the Château d'If and is reborn as a vampire, an undead creature who hungers for revenge as much as he thirsts for blood.

1838 - Paris The wealthy and mysterious Count of Monte Cristo arrives in Paris. He is an eccentric who is never seen eating or drinking and refuses to venture out in the daylight. Rumors abound that the Count is a vampire, but this only adds to the charismatic stranger's mystique. He becomes the center of Parisian society, seducing the entire city with his charm… including all of Edmond Dantes' enemies.

Things have changed in the years since Edmond was framed and his enemies have prospered. Danglers is now a banker and one of the richest men on the continent; deVillefort is the highest legal official in France; worst of all, Fernand--now a general and a war hero--is married to Mercedes.

The Count plays a dangerous game, turning his dark arts to the destruction of these powerful men, and even their innocent children are caught up in his byzantine schemes. Will the innocent perish along with the guilty? And what of Edmond Dantes? Will he find redemption, or will he be swept up and destroyed by the very forces he has invoked?

While I understand the newly found interest in reviving great works by incorporating supernatural aspects (i.e. Pride and Prejudice and Zombies, etc), this work was disgraceful. Rather than working changes more consistently and interestingly into the work, Matthew Baugh has butchered the underlying characteristics of this work of art, as if attempting to recreate a Da Vinci painting using brown crayons and a pack of lobotomized monkeys. The book is an abridgement of the original story, with a mixture of new 'supernatural' aspects thrust in with little regard to the complexity of the story.

The narration was soul-less, riddled with poorly developed voices for characters and improper annunciation of character and place names.

If you are interested in the story of The Count of Monte Cristo, purchase the original story (abridged or unabridged) instead of this seemingly 'plagiarized' monstrosity.