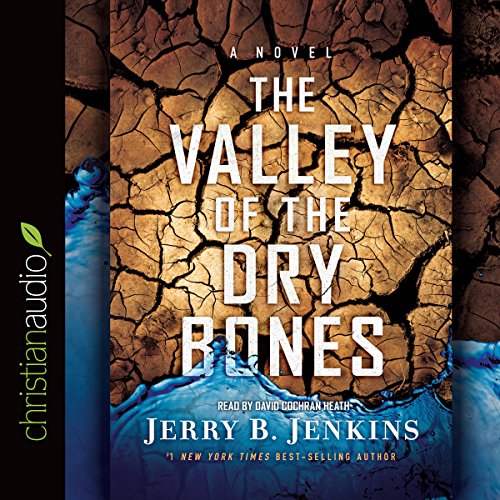 The Valley of the Dry Bones

In The Valley of the Dry Bones, Jerry B. Jenkins overlays the ancient End Times prophecies of Ezekiel onto the landscape of modern California.

After a 17-year drought, multiple earthquakes, and uncontrollable wildfires, the state is desolate. The United States President declares the state uninhabitable and irreparable, directing California's 39 million citizens to relocate. From the air, California looks like a vast abandoned sand box, but to a few groups of people, it's their home.

With less than 1% of the population remaining in California at their own risk, the holdouts encounter a clash of cultures, ethnicities, religions, and politics that pits friend against friend with the future of California at stake.

I truly enjoyed this book, its characters were believable and the story was unpredictable. I found myself praising Lord Jesus throughout the tale. This book had great depth and humor. But most of all, it reminds us of the importance of forgiveness and that we should not ever discount anyone. This book is an example of the reckless love of God. He will search for that one lost sheep while still meeting the needs and cares of the 99. I love You Lord Jesus!

Awesome novel!!! I would recommend to anyone!!!!

Awesome novel!!! Held my attention through entire book. I recommend this to anyone who wants a great story!!!

Thank you. A thoroughly enjoyable story

Loved it! A touch of the prophetic was intriguing and the author kept me connected to the characters and their outcomes.

A wide variety of characters, an intriguing plot with twists and turns made it entertaining and hard to stop listening to.

I found the storyline, characters, and the following of the Biblical teachings to be right on. we are in the end times. the narrator did a good job and held my attention.

This book could have been a great story with a lot of suspense, but it failed to ever reach the potential.
I will start with the reading since this is the Audible review. It seems that the readers of books are being asked to create voices for the characters that simply makes the listening unbearable at times. This is certainly not the first audible book where the reader kills the story with voices that are both hookie and almost weird. I think Audible should simply start having the book read with proper emotion and emphasis and skip men using women’s voices, or start hiring both genders to read so it isn’t so painful.
Now for the story (not a spoiler alert - but you may still want to stop reading if you intend to listen or read the book). It simply takes forever to put the background into place and then in the last 20% of the book he rushes through what really is the conflict and outcome of the story. Had the set up taken 20% of the time and the suspense and intrigue taken 80% then the book could have been fantastic!

Not what I thought

Was not impressed with the book. I like other Jenkins writings but I couldn’t finish this.

Valley of the Dry Bones

Very intriguing , but the end was somewhat abrupt and a little anti climactic. Would love another along this story line.

The pace of this book was a bit too slow for me. The story was good
but I like more action.

this is such a moving book!!!

I love this book it makes me cry every single time I listen to this amazing audiobook written by Jerry B Jenkins. it really wakes you up to your personal relationship with Christ and really makes you examine how you're living your life for Christ. and it will show you and teach you how to improve your walk with Christ and show you what to do to live your life in full Honor & Glory To Our Savior Jesus Christ.