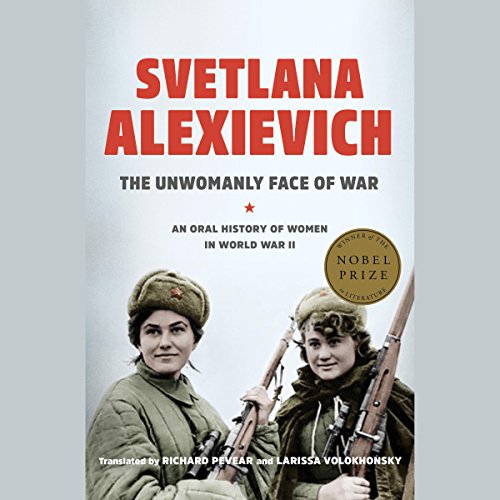 The Unwomanly Face of War

“A landmark.” (Timothy Snyder, author of On Tyranny: Twenty Lessons from the Twentieth Century)

For more than three decades, Svetlana Alexievich has been the memory and conscience of the twentieth century. When the Swedish Academy awarded her the Nobel Prize, it cited her invention of “a new kind of literary genre,” describing her work as “a history of emotions...a history of the soul.”

In The Unwomanly Face of War, Alexievich chronicles the experiences of the Soviet women who fought on the front lines, on the home front, and in the occupied territories. These women - more than a million in total - were nurses and doctors, pilots, tank drivers, machine-gunners, and snipers. They battled alongside men, and yet, after the victory, their efforts and sacrifices were forgotten.

Alexievich traveled thousands of miles and visited more than a hundred towns to record these women’s stories. Together, this symphony of voices reveals a different aspect of the war - the everyday details of life in combat left out of the official histories.

Translated by the renowned Richard Pevear and Larissa Volokhonsky, The Unwomanly Face of War is a powerful and poignant account of the central conflict of the 20th century, a kaleidoscopic portrait of the human side of war.

“But why? I asked myself more than once. Why, having stood up for and held their own place in a once absolutely male world, have women not stood up for their history? Their words and feelings? They did not believe themselves. A whole world is hidden from us. Their war remains unknown...I want to write the history of that war. A women’s history.” (Svetlana Alexievich)

THE WINNER OF THE NOBEL PRIZE IN LITERATURE
“[F]or her polyphonic writings, a monument to suffering and courage in our time.”

“A mighty documentarian and a mighty artist... Her books are woven from hundreds of interviews, in a hybrid form of reportage and oral history that has the quality of a documentary film on paper. But Alexievich is anything but a simple recorder and transcriber of found voices; she has a writerly voice of her own which emerges from the chorus she assembles, with great style and authority, and she shapes her investigations of Soviet and post-Soviet life and death into epic dramatic chronicles as universally essential as Greek tragedies.” (The New Yorker)

"Alexievich's artistry has raised oral history to a totally different dimension. It is no wonder that her brilliant obsession with what Vasily Grossman called 'the brutal truth of war' was suppressed for so long by Soviet censors, because her unprecedented pen portraits and interviews reveal the face of war hidden by propaganda." (Antony Beevor, author of Stalingrad: The Fateful Siege)
"Whatever you thought you knew about the war, you should put it aside and listen to the voices here." ( Library Journal)

Oral history at its finest

Listening to this book brought home the horrendous experience of war, particularly for women in the Soviet Union in World War II. The vivid recollections were at times painful to listen to, but important to hear. There are some books which to me have more impact when listened to rather than when read on a page. This is one of them. A monumental work!

Once you get into this it's impossible to stop listening. The work was years in the making and survived Soviet censors and years where it was unwise to criticize the government. This is well worth your time. There are frightening parallels between this period in history and the present. This is not written with that in mind but is there nonetheless.

I alternated between being mesmerized, repulsed, heavy with sorrow, and uplifted by the accounts of the women who suffered through the horrors of war on the battleground and behind the scenes. The uncomfortable truth yet aching humanity in every story kept me tied to this audiobook for weeks. I had to pace myself between some of the more horrifying stories. But, at the same time, I am grateful to Svetlana for putting these powerful stories to paper. They are stunning reminders that war, glorified in victory stories and decorations, has a horrible side of hatred, death, and suffering, but human kindness and beauty can still find its way through.

the best book about war I've ever read

I'm a combat vet, and I've never thought to consider the role women played in World War II, especially in the Russian army. the voices and stories of these women are incredibly moving, beautiful and horrifying at once. Love, loss, hatred, and Redemption. this book and Bury My Heart at Wounded Knee are the two most important books I have ever read.

do yourself a favor and read this or listen to this.

Should be compulsory reading

This should be required reading for every school. After reading this no one in their right mind can declare war .

Happiness is beyond the mountains, but grief ...

“Happiness is beyond the mountains, but grief is just over the shoulder”
― Svetlana Alexievich, War's Unwomanly Face

“There can't be one heart for hatred and another for love. We only have one, and I always thought about how to save my heart.”
― Svetlana Alexievich, War's Unwomanly Face

Amazing on several levels. Through a chorus of female voices Alexievich brings a new set of eyes to World War II. The experience of Russian women, who fought as snipers, partisans, cooks, engineers, nurses, sappers, etc., during World War II paints the war (and all war) with a humanity and an emotional palette that seldom gets used when covering war. Amazing.

This book was originally published in 1985 under Glasnost. In the preface to this edition (and the preface is one of the best parts of a great book) Alexivich includes sections that she originally self-censored AND parts that were originally cut by Soviet sensors (as well as their comments). This 2017 English version was translated by Pevear & Volonkonsky, the married Russian translation powerhouse famous for their translations of Dostoevsky and Tolstoy.

Like Laurel Thatcher Ulrich's Pulitzer Prize-winning biography A Midwife's Tale: The Life of Martha Ballard, Based on Her Diary, 1785-1812, Alexivich is interested not in big dates, big events, big players. She is interested in the female experience. Her narrative style combines many voices thematically from chapter to chapter (roughly as WWII progresses) to deal with leaving to war, fighting in war, and returning home. Occasionally, she will spend an extended amount of time with a particular sniper, nurse, or tanker whose narrative is fantastically compelling and seems to capture the spirit of those women. But mostly, she is happy to thread these multiple stories together into a narrative quilt that covers not only the female experience of war, but arguably humanity's experience, but the emotional experience that often gets left out of typical "big man" or "big event" histories.

An inspiring story of Soviet Women at War

This is a deeply ennobling and inspiring, if at times harrowing, account of Soviet women at war. The narration is authentic to the times, with the accent emphasized. It makes it seem like you are actually listening to Russian, Ukrainian, and Soviet women tell about their experiences. There are lots of great individual stories found in this book. Its tragic and heartbreaking, but worth the read.

Should be required reading for Military and high school seniors

Not an easy read but we can’t forget history. Slow start but keep reading. The stories seemed to be repeated.

This is the second captivating book by this author that I have read. Personal accounts from women who fought as Soviet snipers and artillery personnel as well as from women medics and nurses in WWII are poignant and often heartbreaking. It would be interesting to hear contemporary women who serve in the military compare their experiences to those of Soviet women who fought 75 years ago.

I am grateful that this book was translated so that I could learn what the war was like for Soviet women that served in WWII. This is a life changing assessment of the reality these women faced and overcame to reach Victory Day and survive. It is rare to comprehend Soviet and Russian daily reality since so much of the history is discouraged from being shared and discussed, and is unfortunately manipulated as well. This was a refreshing read to hear how these women lived and what impact the war had for many of them long-term.