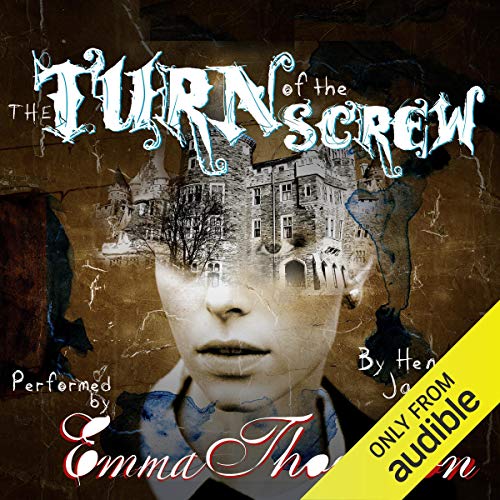 The Turn of the Screw

When a governess is hired to care for two children at a British country estate, she begins to sense an otherworldly presence around the grounds. Are they really ghosts she's seeing? Or is something far more sinister at work?

Having performed in films based on some of the greatest works in literature - including Sense and Sensibility, Howards End, Much Ado About Nothing, and Henry V - Thompson is no stranger to the classics, and she lends a graceful eloquence to this moody, macabre story. Joined by listener favorite Richard Armitage, who performs the prologue, Thompson reinvigorates this psychological thriller of life, death, evil, and the unknown.

"[Narrator] Emma Thompson gives the performance we expect from an Oscar winner. Most listeners don't think of Henry James as a passionate writer, but passion is there, and Thompson brings it out - and adds some of her own.... Thompson's reading will teach new listeners how to read the text - and perhaps James in general - and to understand why he's considered a genius." ( AudioFile)

Thirty-some odd years ago, at the prompting—or insistence—of a girlfriend, I tackled Henry James’ Portrait of a Lady. Three decades later, I still retain the sense of hopelessness as I slogged from one vast paragraph of convoluted inner meditation to another. Maybe I’m wrong. Maybe what I remember as convolution was really excruciating precision--an exactness I lacked the patience to appreciate.

Fast forward 30 years. At the prompting of my wife (no, not the same woman), I have come to love Jane Austen—to scoff derisively at those who claim, “nothing happens” in her novels. I’ve never gone back to try Portrait again. But when Audible put The Turn of the Screw up for sale last October I thought it was time to give James another go. After all, I'm much older and maybe even a little wiser now. Or at least more patient.

This time the Baroque sentence structures made perfect sense; that complexity, so inextricably a part of the story being told, illuminates—even demonstrates—the perplexities of that story. Is the governess mad? Is she seeing things? Is she sane and the threat is real? Do the children commune with evil spirits, or has our narrator been at the Mysteries of Udolfo again?

Then there are all the dark things hinted at but never squarely addressed--unspeakable words and acts that are never spoken of. This, too, is another brilliant gambit: ghosts are hard to make believable--the less an author says the more the reader imagines.

Emma Thompson does it all more than justice, navigating every grammatical and dramatic switchback, getting each voice of her intimate cast just right.

Given my limited acquaintance with James, I was stunned that he was able to create so much authentic suspense. I was even more surprised to learn that this was just his most famous ghost story. He liked writing them, which somehow made this solid literary monument of a man more human.

A cursory Internet search made me aware of the critical fisticuffs that this story has been generating ever since its first appearance in 1898. The questions raised above are but the tip of that particular iceberg. For myself, I’d rather not have every question answered. Like Dashiell Hammett and Raymond Chandler in the next century, James knew the tidy ending is not only “unrealistic”, but slackens suspense. The wisest statement I found on the matter comes from Brad Leithauser, a poet I’ve admired for years:

“All such attempts to 'solve' the book, however admiringly tendered, unwittingly work toward its diminution [; its] profoundest pleasure lies in the beautifully fussed over way in which James refuses to come down on either side... the book becomes a modest monument to the bold pursuit of ambiguity.”

Great, but Mightn't be the Best on Audible

I really, really love "The Turn of the Screw," so this is my third version from Audible, and it's hard to judge as is, as opposed to judging in comparison to the other two that I have.
Let's take as is:
Emma Thompson is fabulous, really brings her acting chops to play, and what can you say? The woman is a powerhouse!
But, and this is where you'll have to judge for yourself, she reads as an older woman. I realize that the story is of an older woman looking back, so I understand why this might be appropriate for the book, but the character at the time is a very, very young woman. She is at a loss, wondering, at times she's near out of her mind, so that is why I prefer the Penelope Rawlins version. Because, even though Ms. Thompson delivers a masterful narrative, the dialogue, the interactions sometimes ring false with her more mature tones, with her poise. The character lacks poise at that age, so it's quite odd to hear such control.
Further, one of the joys of the story is that you never quite know what's real--it's up to the reader to decide for him or herself what is doing the haunting: Evil? or the governess as the conduit, the interpreter of what she "sees." If you lean one way or the other, the end is such that, chances are, you'll still wind up leaning that way. It's every man for himself and I know of two no such people who wind up in entire agreement about what exactly is determining the story here. And that's a delight! It makes for wonderful discussions afterward.
But Ms. Thompson's delivery kind of makes it seem as though there actually is only one way of seeing the whole story, which takes a lot of the fun out of it. The dedication of the governess to seeing one end comes off as rather harsh, strident, monstrous even--it doesn't leave much room for questioning. ...bummer...
Still, gotta love it! A governess overly beguiled and bewitched. Ghosts. Perhaps. Young souls hanging in the balance. How could the stakes be higher?
Great listen, beautiful language, compelling plot, mesmerizing characters.
And if you've gotten the kindle version, come back and choose the Audible versions you'd like!
For more reviews, of all genres, check out AudiobookAccomplice

Glad it's only 4hrs long

"It's Henry James!!! I cannot just turn it off!" - that's how I made myself to finish listening to this book. Basically, if dead people, unreliable narrators, children, and slow exquisite writing is your thing, go for it. The narration by Emma Thompson was purely exquisite. I do not know if I would have been able to finish listening to the book, be it read by anyone else.

Wanted to Love it

I was somewhat disappointed with this selection. I think I may have had too high an expectation. Emma Thompson, Gothic story, Henry James how could it not be fantastic? Something was just not quite right, still not sure what

Would you recommend The Turn of the Screw to your friends? Why or why not?

No, probably not. It was not very compelling. I listen to a lot of audiobooks and one of my standards is how well it holds my attention and I had to actively listen for this one to keep me engaged.

I think Emma Thompson's narration was an interpretation and unfortunately it missed the mark. At times it was too breathy and frantic, if trying to convey a sense of urgency the story should have conveyed without this added affectation. Other times it bordered on the pedantic, which is a shame because prior to this I would have thought I would have enjoyed Emma Thompson reading the phone book.

Could you see The Turn of the Screw being made into a movie or a TV series? Who should the stars be?

In the right hands it could be however this story is very much a psychological journey. Are the events of the story really happening or is this the overwrought imagination of an impressionable young woman?

I have found the narration of famous actors and actresses to be somewhat uneven. This would be an example of a miss, Kate Winslett and Mathilda would be an out of the park homerun. I really think I prefer the work of narrators who primarily do voice work, they enhance the story, the written word without eclipsing it.

I bought this recording because Emma Thompson is the narrator. She is terrific breathing as much life into this story as possible. However Henry James' work has not aged well. While it may have been scary in its time, in an age that has brought us The Exorcist and The Shining, the idea of two young children being influenced by evil has become a cliché. The plot is overly dramatic and predictable. The best thing that I can say about Turn of The Screw (besides the fantastic narration) is that it is short.

Would you try another book from Henry James and/or Emma Thompson and Richard Armitage - introduction ?

Love this story. And Emma Thompson. Who would think that her reading would be such a let-down?! I would not recommend it.

Equals trouble! It happens every time.

"The Turn of the Screw" is an enigmatic classic of horror (or is it madness? Psychology?) It's been put on film and has a number of interpretations available on Audible. Having read and studied the print copy and having seen and heard it in several incarnations, I still happily went for this version.

So, how does Emma Thompson rate among "Turn of the Screw" narrators? I'd normally follow her anywhere, and this is a spectacular performance. The ominous atmosphere and rising suspense are wonderfully conveyed, and it's a fast-moving and satisfying listen. I do believe that one particular slant on the tale's motivations is highly favored here - one that can be more frighteningly ambiguous in reading the book.

Is it necessarily a bad thing to say that anyone who has heard Thompson's narration of "The Turn of the Screw" will find it difficult to see it any other way? I don't think so, but perhaps a newcomer to James' work should read this short book in print form first (preferably alone in a big, old house on a dark, stormy night!)

But Emma Thompson is awfully good - as, by the way, is Richard Armitage in his brief contribution.

Would you listen to The Turn of the Screw again? Why?

I would listen to this book again for the language alone. Henry James' phrasing is delicious.

I would not have been so enticed by The Turn of the Screw had it not been for Richard Armitage and Emma Thompson's incredible performance. The short novel is a masterpiece and a wonderful thriller. Would recommend this novel to fans of Victorian ghost stories, and novels like Dracula, Frankenstein and The Island of Doctor Moreau. Overall the experience of this audiobook was a 10/10.

Overacted to the point of being painful

Emma Thompson is a great actor but should have been reined in here. Laudably, she infuses the reading with energy and enthusiasm, but resorts to shouting and tripling her reading speed to sell the tense moments, making this book absolutely awful to listen to - especially when trying to chill on a long run.

I had to literally rip my earbuds out a few times because the jump in volume from her normal reading voice to her "tense" voice was way too loud, painful, and jarring. Do not recommend!