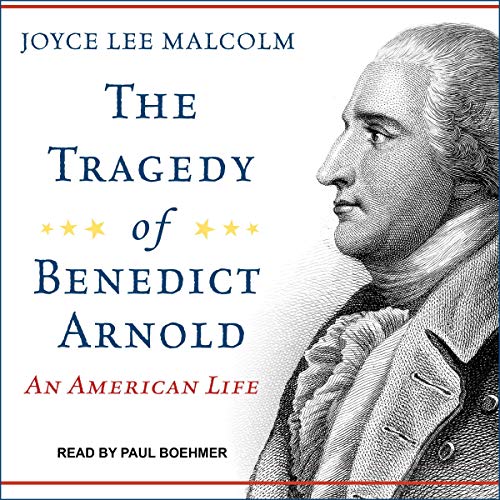 The Tragedy of Benedict Arnold

A vivid and timely re-examination of one of young America's most complicated figures: The war hero turned infamous traitor, Benedict Arnold.

Proud and talented, history now remembers this conflicted man solely through the lens of his last desperate act of treason. Yet the fall of Benedict Arnold remains one of the Revolutionary period's great puzzles. Why did a brilliant military commander, who repeatedly risked his life fighting the British, who was grievously injured in the line of duty, and fell into debt personally funding his own troops, ultimately became a traitor to the patriot cause?

Historian Joyce Lee Malcolm skillfully unravels the man behind the myth and gives us a portrait of the true Arnold and his world. There was his dramatic victory against the British at Saratoga in 1777 and his troubled childhood in a pre-revolutionary America beset with class tension and economic instability. We witness his brilliant wartime military exploits and learn of his contentious relationship with a newly formed and fractious Congress, fearful of powerful military leaders, like Arnold, who could threaten the nation's fragile democracy.

tough to listen to...Reader had difficulty reading the text and all too frequently changed the sentence context.

There are good details on Benedict Arnold . There is also a lot of detail on battles that make no mention of Arnold. More on details relating to Arnold world be better.

A great second look at this much-maligned, but undeniably brilliant officer, formerly of the Continental Army. Independence without Arnold's achievements would likely have gone unrealized. His stunning victory at Saratoga ensured French intervention and ultimately won the war. Such a shame he chose betrayal towards the end, as today he'd be in the highest pantheon of American Heroes if he hadn't, and may've even rose to the highest political office of the land.