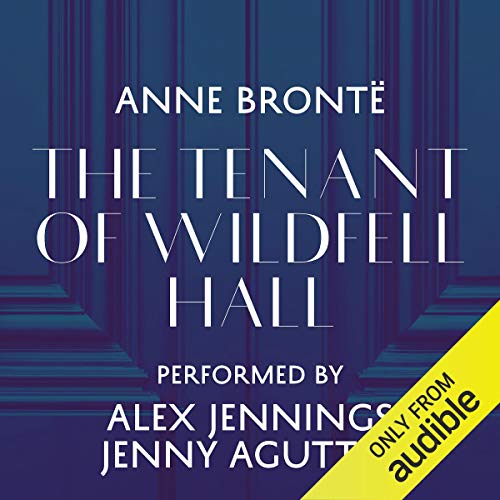 The Tenant of Wildfell Hall

The story of a woman's struggle for independence from an abusive husband. Helen 'Graham' has returned to Wildfell Hall in flight from a disastrous marriage and to protect her young son from the influence of his father.

Exiled to the desolate moorland mansion, she adopts an assumed name and earns her living as a painter. Gilbert Markham, a local man intrigued by the beautiful young 'widow' offers his friendship but becomes distrustful when her reclusive behaviour sparks rumours and speculation. When she offers her diary for him to read only then does he discover the dark truth of her shocking past.

The second and last novel written by Anne Brontë, the youngest of the six Brontë children, The Tenant of Wildfell Hall deals with alcoholism, physical and emotional abuse, unhappy marriages and adultery. Anne's novels are distinctly different from that of her sisters, filled with gritty realism. After her death, Anne's sister, Charlotte, prevented its republication perhaps due to her belief that it was overly graphic and an 'entire mistake'.

Despite first being published in 1848, The Independent described it as a 'frighteningly up-to-date tale of single motherhood and wife-battering.' It is considered one of the more shocking of the Brontë stories and due to Helen's breaking of social convention and law holds firm as one of the first feminist novels.

Three-time Olivier Award winner actor Alex Jennings is known for portraying Prince Charles in The Queen (2006) as well as appearing in Bridget Jones: The Edge of Reason (2004), Babel (2006) and The Lady in the Van (2015). His television work has included Cranford (2007), Silk (2011-2014), and Victoria (2016). He has narrated many audiobooks including Charlie Connelly's Attention All Shipping, which in 2008 was chosen as one of the top 40 audiobooks of all time.

Jenny Agutter began her acting career as a child in 1964's East of Sudan and is well known for appearing in three adaptations of The Railway Children. She starred in the critically acclaimed 1971 film Walkabout as well as receiving a string of Hollywood roles. She won an Emmy for her role in The Snow Goose (1971), as well as a BAFTA for her role in Equus (1997). More recently she has appeared in several television dramas, including Spooks (2002-2003), and Call the Midwife since 2012. She has performed in numerous theatre productions, including roles with the National Theatre and the Royal Shakespeare Company. She has also narrated audiobooks Dodie Smith's I Capture the Castle and Jane Austen's Emma and featured in the Doctor Who audio dramas The Bride of Peladon and The Minister of Chance. In 2012 she was appointed OBE for her charity work.

Despite being lesser known than her sisters' works, "The Tenant of Wildfell Hall" may be the best of the Bronte books. Anne is a good writer; terrific at description, and there is humor here and richness of character development. I really loved this listen. The story is long and, I will admit, tedious at times (it's a Victorian novel after all!), but this edition of the audio book has handled the strange structure of the book very well. Both Alex Jennings and Jenny Agutter render their portions of the narrative beautifully.
A word of warning, however. This claims to be an Unabridged version, but it is not so. Because I was listening to the book as a book club assignment, I followed along with the written version and found some puzzling omissions. Just why they chose to abridge some parts -- especially in the central, diary portion of the book -- I can't imagine. The cuts are small and not terribly important, but nevertheless are there. Anyone wishing to experience the entire work should be aware of the abridgment.
But it's a fine trip! I'm very pleased to have learned that there is more to the Brontes than "Jane Eyre" and "Wuthering Heights".

This is an inspiring and beautifully written book and one I will probably re-read, as fresh today as when it was written over 150 years ago; English prose at it's height. The narration is as well superb. This ranks with Jane Eyre as one of my all-time favourites.

MIssing chunks of the book: abridged by stealth

The best thing is that the original book is excellent.

The reading is missing a number of chunks of the book. I became extremely annoyed and just read the book. I feel cheated.
MIssing sections:
Chaper 30 is missing the sixth-last paragraph:
I was perfectly willing to avail myself of this permission,....for I had not much that was pleasant to communicate.
Chapter 37 has been excised almost in its entirety. At this point, I gave up on the Audible book, feeling quite cheated.
Certainly, if more Audible books are trimmed in this way, I will announce this fact widely.

This under-the-radar Bronte book is a cautionary tale. It is wonderfully narrated by both narrators.

It is an important book and stands easily with Wuthering Heights as a study in unfortunate marriage. It makes one long to read the definitive Bronte biographies.

I never read this book as a teen or twenty-something. Enjoyed it so much, I just read (listened to)it twice - back to back.

Was a little slow starting out the first time around, but then I was hooked.

Some of the themes must have been shocking when it was published in 1848.

This book was alot of fun. I loved the characters. Both narrators did a great job, but I especially liked Jenny Agutter. Her voice is beautiful and she did the characters very nicely. The story is lovely.

Would you listen to The Tenant of Wildfell Hall again? Why?

Yes. The narration was so compelling--Alex Jennings and Jenny Agutter complimented one another perfectly. That alone will bring me back to this rendition. But the story itself is also very compelling. It is a shame that it is often overlooked by modern audiences. Ironically, the issues it addresses are more relevant today than many other highly praised gothic novels.

What other book might you compare The Tenant of Wildfell Hall to and why?

In my mind, it is on equal footing with the more highly touted books of her sisters, Emily & Charlotte Bronte (Wuthering Heights and Jane Eyre).

Gilbert Markham, a very human hero, for his acceptance and support of Mrs. Graham and her young son in spite of the community's turning against her, and for his patience.

Which character – as performed by Alex Jennings and Jenny Agutter – was your favorite?

Alex Jennings as Gilbert Markham. Mr. Jennings was a wonderful narrator. Until The Tenant of Wildfell Hall, I had only listened to books with female narrators, and, I have to admit, I wasn't sure if I would like a male narrator speaking the female dialogue. But his voicing of the female roles, even Helen Graham, was subtle and well-done.

Jenny Agutter's narration of Helen Graham's letters in the middle of the book was just fine, but she didn't distinguish between the characters as much as Mr. Jennings, and sometimes her narration was just slightly clunky, thought still very fine once I got used to it and when I was immersed in the story. If just Mr. Jennings had narrated, I would have given the performance 5 stars.

I've read The Tenant of Wildfell Hall and the BBC adaptation is one of my favorites, so I looked forward to listening. I hadn't remembered the way the BBC series departed from the original story, and not having read the novel for a number of years, the audiobook was almost new to me in parts! This is another great audiobook - recommend it to fans of the Bronte's novels.

This is another great story a Bronte sister. Such a great meditation on the end of life.

I am sorry to say that this is not an "unabridged edition". The few times I have read along in the book I found paragraphs of text missing! I am only halfway through the book! This was very annoying and disturbing to me as I am in a book club and these details of character and story are very important to our discussions. How many more sections are missing of which I am not aware?!

This was my first audiobook I listened to. It really got me addicted... The reading of Alex Jennings is simply great. He has a very pleasant voice and manages to change it amazingly for every single character. The woman's voice is OK,too, though she definitely can't compete with Alex Jennings. If you want to listen to 'The Tenant of Wildfell Hall' then this audiobook is a must have!