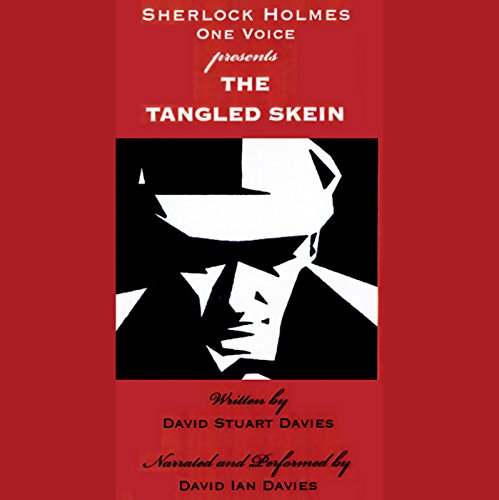 The setting is 1888 London, shortly after The Hound of The Baskervilles case. It opens with Holmes' characteristic derisive reaction to a newspaper account of a local lecture by Amsterdam University Professor Abraham Van Helsing upon the subject of vampires. The Baker Street detective's opinions of the supernatural are quite set and intransigent. The events which proceed from this moment of contempt and disbelief, however, eventually make a believer of Holmes and of the listener to David Stuart Davies' ability to resurrect the very spirits of Holmes and Watson. A mysterious illness begins to afflict the young ladies of a finishing school for girls. Reports of children being attacked and left with bite marks upon their necks appear in the papers.

From the outset, Holmes himself is stalked by an assailant whose obsessive, unmitigated hatred and cleverness may cost Holmes his life. So filled with complications is this gripping drama that the evocative title Tangled Skein could scarcely have been better suited. Portraying it all with customery style and wit is British actor David Ian Davies, whose solitary voice work weaves its own magic and allows us to enter into that place and time, beholding it all vividly in our minds, and forgetting that One Voice has captured our imaginations.

"With great aplomb and bravado, [David Ian Davies] acts out the drama in a full-blooded theatrical manner...An ideal entertainment for a dark winter's night." (Alan Perry)

More a pastiche of a pastiche than an original story, as it resembles one of the "wolfman meets Dracula" films of the 40's rather than one of Conan-Doyle's efforts. Basically a sequel to the hound of the Baskervilles with Dracula tacked on. Not that there isn't some slight entertainment here, but fans of Holmes or the Count may be disappointed by this rather cardboard outing for their heroes.

The book itself is fine. The story is perfectly decent. There are some problems, but nothing too terrible, and if you're open to the idea you'll probably enjoy it.

... Just stay away from this audiobook. This one officially wins the award for the worst audiobook I've *ever* heard. And I'm not exaggerating here. We're talking Ed Wood levels of incompetence. Not one thing went right.

Technically, it's pretty bad. You can oftentimes clearly hear jazz/swing music in the background. (Is it from the other side of a cassette tape??? If so, why is there jazz on the other side???) It's incompetently slapped together-- you can tell exactly where the sound engineers made a cut and threw in a new audio clip. At completely random moments, a character's dialogue will be enhanced with an echo, and I never saw any rhyme or reason to this choice. Is it only done in an echo-ey room? Nope, because while we stay in that room of the house the conversation suddenly becomes normal again. It can even happen in the middle of a conversation that has been entirely normal until now! It's basically a moment where the sound crew gets to go "Surprise!" before resuming business as usual.

And the narrator? My goodness, he does not get one single inflection right. Not one single word made me believe any of this was going on. His voices for the various characters are barely differentiable, and he has the same laugh for *everyone*! Whether surprised, pleased, or diabolical, it's the same cackle and it gets irritating. Not only that, he ploughs through his words so quickly that you barely get the time to process his information.

In short, it was a fascinatingly terrible audiobook. I listened spellbound before turning it off and reading the book for myself. If you want to read this book, please conserve your sanity and stay away from this audio production.

Is all old and rehashed

If you have read Dracula and the Hound of the Baskervilles than you will want to pass on this title. All Davis did was combine the two, often going so far as to plagerize dialog and script from the two stories listed above.
It is an insult to the reader's intelligence. There is absolutely nothing new here at all.

I thought this story was fun to listen to. The author melded the two stories of Dracula and Holmes together in a believable way. The characterizations were strong and the narrator's performance was well done. I'd recommend this.

What did you love best about The Tangled Skein?

Smartly written as a Sherlock Holmes mystery, only this time the legends and ghost stories are all true! This thrilling tale lunges forward as quickly as a ghostly hound over haunted moors. Not only the

A tale that offers the world's greatest vampire had better deliver a true terror, and this one does. Dracula is given sinister

What about David Ian Davies’s performance did you like?

David is a good reader, and has an amazing range of voices. Perhaps the editor could have let him slow a bit, as he races through the reading with no room for a dramatic pause, leaving you as breathless as Dracula's victims. I did wish to hear him do a slower

The ending is exciting, but the scene with the phantom lady is an excellent chill!

The story seemed fun and one I would enjoy. The voice of the narrator was a little grating but not bad, BUT he raced through the words faster than I could catch my breath. How did he do it? This rappid, unmittigated pace was too much. Why did he ruin the story by not even taking time to catch his breath. Sorry! It might have been very good.

I found this book to be very entertaining, as I listen going to and from work. The reader has a wide variety of different voices, making it sound like a full cast of characters. Enjoyed the book very much; I highly recomment it ..

narration was laughable, except i paid for it

this was a great story, with a horrid storyteller. the narration is sooo corny one can barely listen. i would like to hear this done by professionals