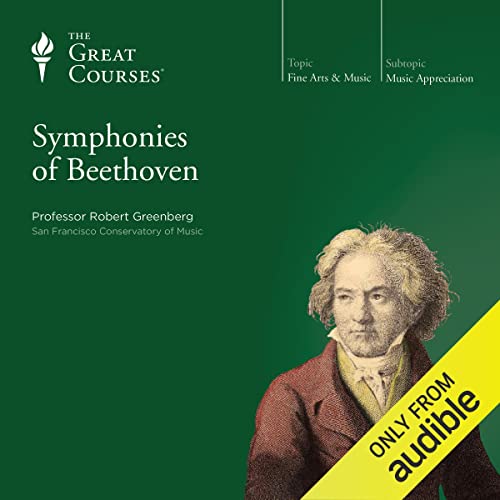 The Symphonies of Beethoven

Ludwig van Beethoven is justifiably acclaimed as one of the most revered composers in the history of Western music-a genius once characterized as a "Titan, wrestling with the gods." There is no better way for you to understand the full impact of that description than to not only listen to all nine of his magnificent symphonies, but to do so with a full understanding of what this great composer was saying and the circumstances that drove him up to and beyond what had once been considered the limits of musical expression.

The 32 lectures that make up this detailed introduction to Beethoven explores each of his symphonies in depth, explaining the gifts of musical communication that made this composer unique. Even without any previous musical training, you'll be able to grasp the absolute directness that made his work so accessible, the sheer emotional power that could never be ignored, and the ways in which his ideas were revolutionary on every level. Beginning with an introduction to Beethoven the man and the musical and societal forces that shaped his development, you'll explore his breathtaking innovations: harmonic, melodic, rhythmic, formal, dramatic, self-expressive, and emotional. And you'll come to understand how and why this man was able to lead music into a totally new era as he dispensed with the restraint of 18th-century Classicism to usher in the era of romantic self-expression - even as his own ability to even hear what he was creating was progressively and tragically vanishing.

A Great Course with a Great Caveat

Would you try another book from The Great Courses and/or Professor Robert Greenberg?

Prof. Greenberg's style is passionate and humorous which makes the course quite enjoyable. His explanations are good.

Which character – as performed by Professor Robert Greenberg – was your favorite?

If you could play editor, what scene or scenes would you have cut from The Symphonies of Beethoven?

A great caveat is that Audible does not offer the word scores Prof. Greenberg uses heavily in this course and which are described in the very beginning as of great importance to understand the course. Not only that, but the professor skips some parts, due to lack of time, instructing the listeners to read those parts in the word scores!

The question now is: Why doesn't Audible mention clearly that these courses come without the word scores that are given great importance by the instructor? And why doesn't it strike a deal with that company to sell the word scores and add their prices to the books'?

"And his nine symphonies are among the greatest..


"And his nine symphonies are among the greatest achievements of the human spirit."
32 lectures | 45 minutes each

1-4 Beethoven and the Heroic Style

5-6 Symphony No.1- Beethoven as Classicist

7-8 Symphony No.2-Beethoven at the Edge

13-16 Symphony No.4-Consolidation of the new Aesthetic

This is one of my favorite courses yet from the Great Courses Company and especially Professor Robert Greenberg of the San Francisco Conservatory of Music. I have heard some of the music before such as the great 5th Symphony, but I can’t say I understood it at all.

This course helps you to understand what you are listening to and why it was written in this particular way. It also shows you how Beethoven took music from its beginnings and stretched it to its limits. The Professor felt that if Beethoven lived today, he would have loved Jazz music and even Rock and Roll. (Of course, he probably would have lost his hearing even quicker now.)

Of all the music I listened to in this course, I loved the 6th Symphony the best. It spoke to me of nature and the people and their relationship with the earth.

The Professor also fills us in on Beethoven’s private life. We learn who his “Immortal Beloved” was and his strange relationship with his brothers and sisters-in-law. He was a genius but also a very weird personality.

Along with these lectures comes a book written by Dr. Greenberg to help you listen to the complete symphonies by yourself. Now Amazon Prime has Leonard Bernstein’s collector’s edition of all of Beethoven’s Symphonies for Prime members.

Truly the course materials MUST be made available.

Would you listen to The Symphonies of Beethoven again? Why?

Yes, because being new to music theory I didn't absorb it all the first time, but would very much like to.

What was one of the most memorable moments of The Symphonies of Beethoven?

Beethoven's letter to everyone for when he died was particularly poignant, abs the explanation for the last movement of the Second Symphony was priceless.

What about Professor Robert Greenberg’s performance did you like?

Smart people work at The Teaching Company and Audible. Please figure out how to make the course materials available. They are critical despite your protestations to the contrary.

THE STUDY GUIDE IS NOW AVAILABLE!

A fantastic course is now even more wonderful now that the in-depth Study Guide is included. Thanks Audible!

Beethoven's nine symphonies are amazing works of art, and this course helps bring them to life. My personal knowledge of orchestral music was incredibly limited until I began listening to Professor Greenberg's series of courses on music appreciation. This is the fourth of his courses that I've completed, and it is as outstanding as the others. As an initial comment, unless you are experienced with orchestral music, I recommend taking Professor Greenberg's How to Listen to and Understand Great Music before tackling this course. His introductory course provides a great deal of important contextual information that made this course easier to understand.

My one caveat to this course is that there are several parts—perhaps too many—where Professor Greenberg gets very technical on musical theory. I have no ability to interpret pitches, harmonies, etc…, though the professor spends considerable time talking about how Beethoven used different musical elements like pitches in the symphonies. I will freely admit that the professor lost me almost completely when he began those discussions. A listener with a good understanding of musical theory would probably love those parts of the course, but for me it is something to endure. It is, however, worth enduring to get to the parts where the professor discusses elements of the works such as Beethoven's life experiences that influenced the music and the meaning that Beethoven was trying to express in certain passages. Professor Greenberg does a fantastic job opening up Beethoven's nine symphonies to an amateur such as myself. The course is both fun and enlightening.

What does Professor Robert Greenberg bring to the story that you wouldn’t experience if you just read the book?

His enthusiasm is so engaging and his depth of knowledge is astounding!

While the word score would be nice, I bought this to listen to in the car and it not only entertains, but gives so much information that I was enraptured throughout. I bought all 9 symphonies so I can listen to them and go back and re-listen to the lectures on each symphony to deepen my understanding. I will definitely be buying more of The Great Courses.

Where is the course outlines?

The Great Courses series is a wonderful new addition and I am really delighted to get all these wonderful courses at such an affordable price (if you pay for credits), but oddly enough, unlike other audio courses such as the Modern Scholar series, the outlines are not included. This is a major disappointment thus 3 stars for overall. I hope Audible will correct this defect.

Professor Greenberg has a deep love for music, and a great way of communicating his enthusiasm for why works like Beethoven’s symphonies are beautiful, important and worth studying. Great fun and time well spent.

The best professor The Great Courses has!!

Robert Greenberg is by far the Beethoven of professors. The word scores are amazing and the lectures are engaging. informative and whitty. Just can't say enough about his courses...and that's some hemiola, my friends.

It's been a worthwhile ride! Can't wait to hear about Verdi & his works after that.

Prof. Greenberg has his very own style, which you can like or not; but in any case he manages to lighten up otherwise rather dry material in such a way that the motivation to continue listening is always given.
In terms of content, the lessons are beyond reproach.
Unfortunately, the PDF of the additional material is at least partially so jumbled that it is difficult to follow the text.

great course for a great artist

thank Prof Greenberg.
As a native German I can not always appreciate your american style talking and presentation.
I rather prefer a quiet and sober lecture, because it's my decision to listen to you.
however, the quality of your teaching let me overlook this little annoyance.