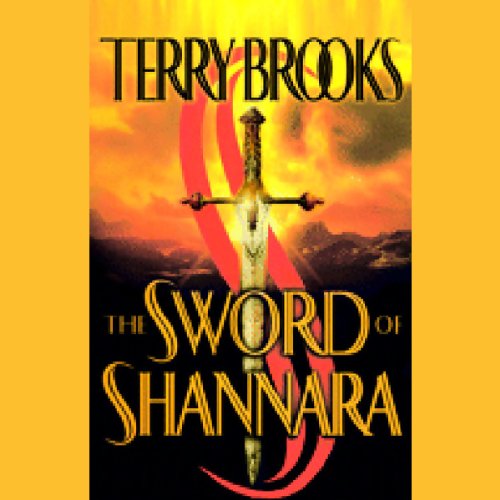 The Sword of Shannara

The Sword of Shannara

The Sword of Shannara is the first volume of the classic series that has become one of the most popular fantasy tales of all time.

Long ago, the wars of the ancient Evil ruined the world. In peaceful Shady Vale, half-elfin Shea Ohmsford knows little of such troubles. But the supposedly dead Warlock Lord is plotting to destroy everything in his wake.

The sole weapon against this Power of Darkness is the Sword of Shannara, which can be used only by a true heir of Shannara. On Shea, last of the bloodline, rests the hope of all the races.

If you like Lord of the Rings and want to read it again, here you go.

Still a poorly written Tolkien knock off not worth the ink it's printed on or the bytes recorded on in this audiobook.

Lord of the Rings

Very similar to LOTR. So much so it took away from the book for me.

fellowship of the sword

while listening, i couldn't stop thinking of lord of the rings. the first half of the book looks like fellowship of the ring, and the second half like the two towers and the return of the king... all in all... a good book, but doesn't seem a new story

I remember reading and loving these books as a kid. I was disappointed to find that I just didn't enjoy this book 20 years later.

I’ve been reading a lot of old school fantasy lately and this one basically blends into the rest, unfortunately.

Well, it wasn't BAD. But it sure wasn't good either. It's a good adventure, but the characters are flat in the storyline predictable. I'm not convinced about reading the next in the series.
It's too bad really, the world building had a lot of potential.

Despite the obvious and unmistakable Tolkien rip-off (The characters and events in this story can literally be mapped straight across to the Lord of the Rings), Brooks does interject a few interesting ideas of his own. Enough so that, despite laughing at how ridiculous the writing was through the entire first 3/4 of the book, I find myself actually thinking about buying the next book.

What was most disappointing about Terry Brooks’s story?

I try not to hold a fantasy book written in the 1970's--when the genre was in its infancy--to the same standards of today. Therefore, I will make no mention of magic systems, or unique races, or world building. I will only say that this reads like a 15 year old boy's dungeon and dragon's adventure based upon the Lord of the Rings series. As I said above, the characters in this book literally map straight across to Tolkien's characters: Flick Ohmsford = Samwise Gamgee, Shea Ohmsford = Frodo Baggins, Allanon = Gandalf, Menion Leah = Boromir, Ballinor = Aragorn, King of the Silver River = Tom Bombadil, Gnomes = Orcs, Hendel = Gimli, The Warlock Lord = Sauron, Skull Bearers = Ring Wraiths, Orl Fane = Gollum. And the list goes on and on. I'm not even a Tolkien fan, and I could not miss it. Another quick example, no spoilers: The first scene opens with a man walking back to his village. He is accosted by a stranger in the road. After the stranger releases him, the man says, I thought you were a thief, to witch the highwayman replies, "you should learn to tell your friends from your enemies." That statement is utterly meaningless in this context, but it is the kind of thing a young man might write because he thinks it sounds good. The entire book is not this way, but much of it is.

Scott Brick, the narrator, is so much better at non-fiction than fiction. His voice has a nice tone to it, but for some reason he tried to do English/Irish/Scottish accents on the characters. (Is Brooks British?) His accents came and went constantly. I really wish he had not bothered. It was a distraction throughout the entire book.

I did like the story because I read it 40 yrs ago at the age of 13. I disliked that it is a total rerun of JRR TOLKIEN'S , The Lord of the Rings.

Has The Sword of Shannara turned you off from other books in this genre?

Not at all, I love this genre!

Over the top. I did enjoy his different accents and was not put off by the fact he is American doing English, Irish and Scottish impersonations. During the fight scene with Alanon and the Skull Bearer it was so exciting but still, one cannot get away from the fight scene with Gandalf and the Dragon.

Could you see The Sword of Shannara being made into a movie or a TV series? Who should the stars be?

I do not see it! It is a total plagiarism of the Lord of the Rings

What would have made The Sword of Shannara better?

I only read 6 chapters before i couldnt take anymore. I wont read (or listen) to anymore from this author that blatantly steals Tolkiens work damn near word for word.
A strange, mysterious person comes to a village and tells shay,one of the main characters,that hes in danger and needs to leave. He tells shay to meet him and that he cant go with him. So shay and his brother flick set out. On the road theyre followed by some black creatures but they are miraculously saved by the coming of the dawn and the creatures disappear. (which is a mixture of Tolkiens black riders and the first encounter with the trolls combined) Then they get to another village where they have a talk with another guy that decides to join their company. The group has to go through a dark and mysterious forest. One of them climbs up the trees at one point to get their bearings. (straight out of the hobbit). Then the author goes back to stealing from the fellowship of the ring when at one point oak tree tentacles come out of a swamp and captures one of them and the others have to rescue him.

The narrator did a good job.

The story had many points where I felt that a supposedly wise leader acted very foolishly and not in character.
The reader created a constant emotionally charged atmosphere which made it somewhat boring, yet irritating to listen to- it was always the same, even when they were just walking down a path.
There were also frequent and noticeable errors in the words he emphasized, sometimes giving the sentence a whole different meaning than what I felt the author wanted to say.

Lord of the Rings knockoff

I struggled through this book because I've heard the series gets better, but this is a total ripoff of Lord of the Rings. The entire time I was thinking, "Awww they made it through Moria" or "the fellowship is broken" etc. But I'm hoping the next book is better.

it is quite hard to follow the story. The characters and happenings are quite unspecific so that I tended to drift of all the time. Even when focused on the book I found it hard to say what happened the past five minutes at any given point.