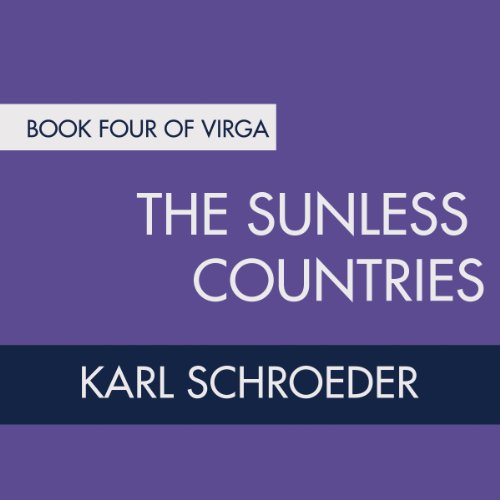 In an ocean of weightless air, where sunlight has never been seen, only the running lights of the city of Pacquaea glitter in the dark. One woman, Leal Hieronyma Maspeth, history tutor and dreamer, lives and dreams of love among the gaslit streets and cafes. And somewhere in the abyss of wind and twisted cloud through which Pacquaea eternally falls, a great voice has begun speaking. As its cold words reach even to the city walls - and as outlying towns and travelers' ships start to mysteriously disappear - only Leal has the courage to try to understand the message thundering from the distance.

Even the city's most famous and exotic visitor, the sun lighter and hero named Hayden Griffin, refuses to turn aside from his commission to build a new sun for a foreign nation. He will not become the hero that Leal knows the city needs; so in the end, it is up to her to listen, and ultimately reply, to the worldwasp.

Schroeder is a hard science fiction writer who builts fascinating worlds AND populates them with interesting characters. Joyce Irvine, who also narrates the other books in this series, has a unique voice that I absolutely love. David Thorn is also a very competent narrator.

I did find it annoying that Irvine and Thorn often switch off narration in the middle of a scene. Whenever they switched at a point that wasn't a chapter break, it distracted me for a couple of minutes.

loved this series it make you want more. also read Ventus by the same author for more artificial nature and it's downfalls

Ideas you may never have run into

Possibly the best of the series And some ideas about The evolution of intelligence that you may never have heard of before. Legitimately new ideas, in addition to fine operatic story, this is truly a joy.