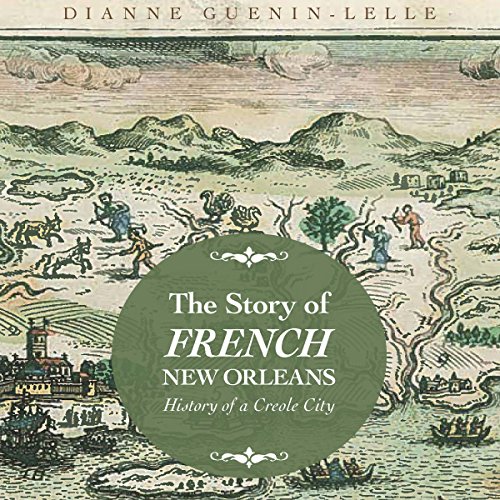 The Story of French New Orleans

What is it about the city of New Orleans? History, location, and culture continue to link it to France while distancing it culturally and symbolically from the US. This audiobook explores the traces of French language, history, and artistic expression that have been present there over the last 300 years. This volume focuses on the French, Spanish, and American colonial periods to understand the imprint that French sociocultural dynamic left on the Crescent City.

The migration of Acadians to New Orleans at the time the city became a Spanish dominion and the arrival of Haitian refugees when the city became an American territory oddly reinforced its Francophone identity. However, in the process of establishing itself as an urban space in the Antebellum South, the culture of New Orleans became a liability for New Orleans elite after the Louisiana Purchase.

New Orleans and the Caribbean share numerous historical, cultural, and linguistic connections. The audiobook analyzes these connections and the shared process of Creolization occurring in New Orleans and throughout the Caribbean Basin. It suggests "French" New Orleans might be understood as a trope for unscripted "original" Creole social and cultural elements. Since being Creole came to connote African descent, the study suggests an association with France in the minds of whites allowed for a less racially bound and contested social order within the US.

Very few people have knowledge of this topic so all listeners can gain information by listening to this well performed Audio Book.

It is not always entertaining but if you listen to the entire Book you will can insight into an interesting topic.

The most non-american US city

Dianne Guenin-Lelle's history of New Orleans provides a very interesting and comprehensive history of the city and it's people. It looks at the "most non-American in the USA" and it's origins in French, British, African and Caribbean cultures and peoples. How changing politics - Louisiana purchase, French Revolution, Napoleonic wars, US civil war and so on - all shaped the city. It looks at how race relations changed things. How the meaning of 'creole' was adapted depending on the people and the politics.

One thing I found highly interesting what looking at the names of major roads in the city and what they are called. How changing of names, or the time in which they were named, provided an insight into the political and social affiliations of the Orleans peoples.

Narration by Sally Martin was good. Clear, easy to follow, well paced. She dealt well with the French and creole when it came up in the text.

The Story of French New Orleans: History of a Creole City. - This is an in depth work and is highly detailed in it's coverage of it's subject. Not a light read, but for anyone with an interest in real history and New Orleans this is the book to read/listen.
I rate the narration of this book 5 star - because Sally Martin managed to make a quite heavy history work into a pleasure to listen too. ( Think favorite college professor easy to listen too )
I was given a free copy of this audiobook at my own request, and voluntarily leave this review.

Great history of New Orleans and the development of a fascinating city. I really enjoyed the story and it was a great way to pass a long commute.

The narrator has an excellent voice -- very clear and easy to understand, even at high speeds.

A lot of good information and good narration as well. I felt like I was given a thorough history lesson. I was voluntarily provided this free review copy audiobook by the author, narrator, or publisher.

The writer clearly wants to express their superiority of the English language.

Instead of simply telling history, she goes out of her way to complicate sentences and meaning by using big words.

She also loves to drop French pronunciation at any chance.

The listener is supposed to be impressed by both but I ended up cringing at every moment.

It's the worst audiobook I've ever heard.

This is a scholarly study of French Creole New Orleans. A very enjoyable book and really appreciated learning more about New Orleans history and culture. Loved that the author talked about authors, books and newspapers in this study. So enjoyed this book may listen to it again soon.

Good history and insights but repeative

Good overview of New Orleans and Louisiana history and how the culture formed. Only issues were that there seemed to be some repeatition later on in the book and some major events where brushed over with little detail given.

A Comprehensive Story of New Orleans

This was a great detailed audiobook about how the city of New Orleans came about. It was detailed and pretty long but very interesting. I feel that I have a greater knowledge of the city and the state of Louisiana. It has a rich history of many peoples and cultures. I listened to this audiobook in three sittings while I painted. It was relaxing and I felt I could paint a picture of New Orleans such as this book did with words.

Sally Martin did an excellent job narrating. She spoke clearly and was easy to understand. She had great pronunciations.

Wow, this thorough history of New Orleans is very comprehensive and thought-provoking, well written, and full of really interesting facts. So much went into making the city what it is today - a complicated history of politics, religion, and different and intriguing cultures..... it's fascinating. My parents are from Alabama and Mississippi, and I enjoyed listening to some southern history.

I thought the narrator did an awesome job, and I was very pleased with this audiobook. Would definitely recommend it to others :)

I was given this free review copy audiobook at my request and have voluntarily left this review.
Please take a moment to click the "YES" ("Helpful") button below if you found this review helpful :) Thank you!