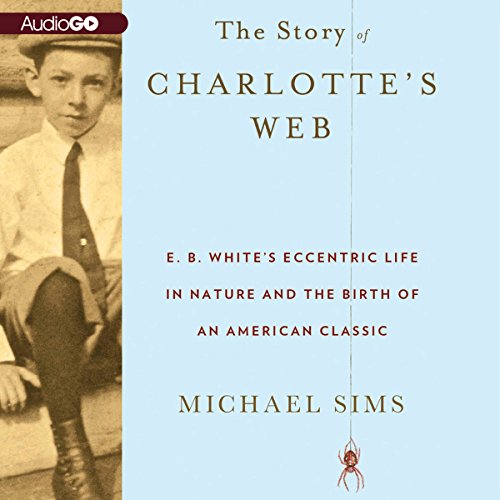 The Story of Charlotte's Web

As he was composing what was to become his most enduring and popular book, E. B. White was obeying that oft-repeated maxim: "Write what you know." Helpless pigs, silly geese, clever spiders, greedy rats - White knew all of these characters in the barns and stables where he spent his favorite hours. Painfully shy his entire life, "this boy", White once wrote of himself, "felt for animals a kinship he never felt for people." It's all the more impressive, therefore, how many people have felt a kinship with E. B. White.

With Charlotte's Web, which has gone on to sell more than 45 million copies, the man William Shawn called "the most companionable of writers" lodged his own character, the avuncular author, into the hearts of generations of readers.

In The Story of Charlotte's Web, Michael Sims shows how White solved what critic Clifton Fadiman once called "the standing problem of the juvenile-fantasy writer: how to find, not another Alice, but another rabbit hole" by mining the raw ore of his childhood friendship with animals in Mount Vernon, New York. Translating his own passions and contradictions, delights and fears, into an all-time classic. Blending White's correspondence with the likes of Ursula Nordstrom, James Thurber, and Harold Ross, the E. B. White papers at Cornell, and the archives of HarperCollins and The New Yorker into his own elegant narrative, Sims brings to life the shy boy whose animal stories - real and imaginary - made him famous around the world.

"A fine stylist, Mr. Sims portrays these scenes with a beauty and an economy of language that would make the co-author of The Elements of Style proud." ( The Wall Street Journal)
"An affectionate biography…. Packed with the same kind of sensory detail its subject reveled in, this account is an honorable addition to the literature of letters." ( Kirkus Reviews)
" The Story of Charlotte’s Web is a paean to a great work and a window into the uniquely gifted man who created it." ( Christian Science Monitor)

This book seemed to work hard to find a reason for existing.

IMO - it missed the entire nature of E B White. The actual part that followed the title about the writing of Charlotte's Web was mildly interesting but my reaction was "It's about time." Frankly, it reads almost like a celebrity profile - mildly interesting but not of much import. The writing style was overly verbose - attempting poetry as a means to hide adding wordcount was my impression. Mr. Sims also seems to love the word "metamorphose." When you start seeing the same word over and over in a book, it makes you wonder if the author had learned a new word that day and was looking for opportunities to use it.

The narrator was irritating. It may have been his copy but he replaced the word "biographical" with "biological" in every instance. His manner was that of an adult reading to children. His over emphasis on each syllable - especially his tendency to crisp every letter "T" he encountered - was wearisome. I won't be listening to any more books narrated by Sullivan.

Difficult to review the work because its purpose remains unclear to me. The title led me to believe that there was some real "story" behind the writing of this book. Not really true. Like most books, it was inspired by the experience of its author. No real "story" there. The book definitely was not a biography of E B White.

Not a "bad" book. Just extremely ordinary. I'll have to read more biographies of E B White to see if he was as ordinary as this book led me to believe.

This is a book about the author of a book I loved: "Charlotte's Web". It is about how that book I loved came to be. It is not written with the charm nor the humor of that original book. Sims' book is interesting. It tells not only of E.B. White's career; he worked for many years at The New Yorker. The story is filled out with information about prominent children's authors and illustrators during the first half of the 20th Century. If that is what you are looking for you may appreciate this book more than I did. Parts are flat, boring and stuffed with irrelevant details. Neither did I love the narration by Nick Sullivan. The book doesn't pull you in, doesn't engage you or make you care in the slightest for any of the characters. It reads like a dry text book....but sure there are interesting facts.

'Story' weaves a web of its own.

Would you listen to The Story of Charlotte's Web again? Why?

I very much appreciated the way that Sims was able to bring in the various elements that contributed to White's writing the book.

What does Nick Sullivan bring to the story that you wouldn’t experience if you just read the book?

Well, he's competent for the most part. How do you pronounce 'pianoforte' anyway?

I think Story appeals to intellect and curiosity more than emotion, not that it is devoid of emotion.

I'll be looking for more of Sim's work in audible formats!