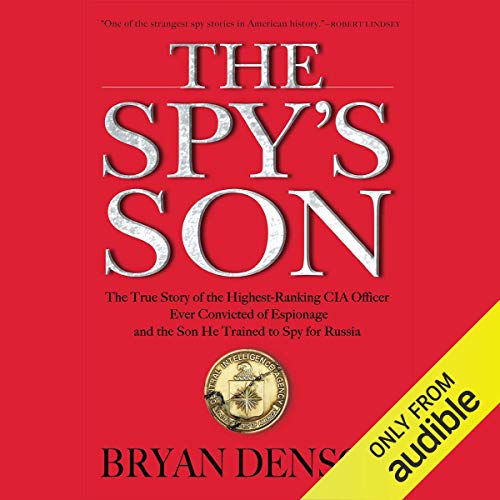 Investigative reporter and Pulitzer Prize finalist Bryan Denson tells the riveting story of the Nicholsons - father and son coconspirators who deceived their country by selling national secrets to Russia.

Jim Nicholson was one of the CIA's top veteran case officers. By day he taught spycraft at the CIA's clandestine training center, The Farm. By night,he was a minivan-driving single father racing home to have dinner with his kids. But Nicholson led a double life. For more than two years, he had met covertly with agents of Russia's foreign intelligence service and turned over troves of classified documents. In 1997 Nicholson became the highest-ranking CIA officer ever convicted of espionage. But his duplicity didn't stop there.

While behind the bars of a federal prison, the former mole systematically groomed the one person he trusted most to serve as his stand-in: his youngest son, Nathan. When asked to smuggle messages out of prison to Russian contacts, Nathan saw an opportunity to be heroic and to make his father proud.

"A haunting book as fast paced and as exciting as the best spy novel...and it’s all true." (Robert Lindsey, author of The Falcon and the Snowman)

STORY (personal memoir) - I'm very careful purchasing true stories and personal memoirs because they have a hard time competing with fiction when it comes to pure entertainment value. BUT...this story has it all. You will hear of Jim Nicholson's (the spy) years working in the CIA, his family life and, of course, his betrayal of America by passing top secret information to Russians. You will hear about secret communications, photographing documents, meeting Russian handlers in various countries, just like in Bond movies minus the chase scenes, women and the fancy gadgets. You will also hear how, while imprisoned for espionage, Jim was able to influence his youngest son, Nathan, into briefly following in his own footsteps.

One of my favorite parts is when the CIA and FBI work together to gather enough evidence for a clear-cut case against Jim while, at the same time, not causing him to flee to safety in Russia. Spies spying on a spy! At one point (tiny spoiler) the government purchased a van just like Jim's so they could tear it apart to identify hiding places. Then they rented a crane to pick up Jim's van, place it on a truck and haul it off to be secretly searched without increasing odometer miles. Jim's investigation was known to only a small handful of agents, as there could be Russian moles in the agency or friends who might inadvertently warn him of the investigation and, again, cause him to flee to political asylum in Russia. The book ends with the American legal system dealing justice to both Nicholsons.

PERFORMANCE - Good job, even tossed in a few Russian accents for the spies.

OVERALL - Recommended for anyone interested in the subject, male or female. There is no sex or violence, but there is a sprinkling of curse words.

This book reads more like a spy novel than a non-fiction book. It grabbed my attention right off and held it throughout the book.

In June 1997 Judge James Cacheris sentenced Harold James Nicholson, the highest ranking CIA officer ever convicted of espionage to 23 years in prison. He was placed in a federal prison in Oregon where his family lived. He was arrested and convicted while in prison, again for espionage for running his own son. He had another eight years added to his sentence.

Nicholson had recruited his youngest son Nathan to carry messages to his Russian contact and bring home the money they paid him. Bryan Denson is a reporter with The Oregonian newspaper. He drew upon FBI reports, court documents, military records, personal correspondence and hundreds of hours of interviews (with Nathan) for this award winning book.

The book is full of fascinating details of the clock and dagger techniques of the KGB and CIA operatives, double agents and spy catchers. The author tells the story of the Nicholson family and what happened to it when betrayed by the father.

I found this a most interesting story. Jason Culp does an excellent job narrating the book.

No words to adequately express...

Having been a fan and addictive reader of espionage fiction, mostly historical, this Pulitzer Prize level of journalism and literature, and all that it represents, has been a non-stop listen for me. The only thing that would improve the level of this experience for me would be to have a special review level that exceeds 5 stars in every category!

Spy's Son is a very well-written and nicely structured work that explores numerous angles in the Nicholson case without being fraught with emotion or judgment. Denson just lets the facts speak for themselves, and my oh my, what a story they have to tell! Plus the book manages to be suspenseful even though, as non-fiction, the ending of the "story" is already a matter of historical record. Nicholson was the highest-ranking CIA officer ever to be convicted of espionage yet is far less well-known (notorious?) than Aldrich Ames. His treason does not appear to have resulted in any CIA assets being summarily executed (versus Ames, responsible for about 12 Russian deaths) but he did plenty of damage nevertheless - several entire classes of "Farm" graduates betrayed to Russia's Foreign Intelligence Service, or SVR. Kudos to the author for his dogged research, objectivity, and apparent journalistic integrity. Jason Culp does an excellent job of narration.

Loyalist to Miscreant: Narcissism and Money

This is a fascinating account of Jim Nicholson's espionage, triple life, and disturbing justifications. The book does a great job outlining indicators displayed by those actively engaging in such activities. The specifics of Nicholson's situation are glaring.

Empathy for Nathan, and the situation his father placed him in, is nearly unavoidable. Candid testimony given by Nathan himself lights upon the path of a loving, confused son, being handled by a manipulative spy. A spy, so long on the job, he may have been unable to deviate from psychologically comfortable manipulation of those around him. Jim's marital infidelity, his dishonest use of money, and other evidences show an early developed, even enjoyed, deceptive narcissism.

Presented by the author, Jim stands to be released from prison in 2024. I can't wait to see if the seventy year old spy will flee to Russia, or remain in the USA.

This was a well crafted, well presented, and convincingly researched narrative of one man's path from loyalist to miscreant

In depth look at a double agent.

What made the experience of listening to The Spy's Son the most enjoyable?

The distinctive lilt that Culp gave the character's voices that fit and enhanced the non-fiction work.

What other book might you compare The Spy's Son to and why?

Denson's work is quite reminiscent of Ben McIntyre in that he takes an in-depth view of famous crimes in a snapshot of recent history.

Have you listened to any of Jason Culp’s other performances before? How does this one compare?

This is the first Jason Culp audio book I've heard.

Would you do anything for the ones you love?

If you’re interested in criminal psychology, spy fiction or generally stories of dysfunctional families, “The Spy’s Son” is the story for you. Give it a shot in audio book format. You will not be disappointed.

The fact that this book is true makes it even more appealing! The author did a tremendous job of thoroughly discussing details that an ordinary citizen curious out the spy world would want to know. These details really made for great storytelling. Thoroughly enjoyed this book.

This book was very interesting and easy to read. It held my attention from the very beginning to the last words. It gives a great insight into real lives of spies, the work they do, the temptations they face, but especially the toll their job takes on their families. It's also a touching story of one boy's tough path to maturity and becoming a man.

I found this book to be well researched, well written and told with both empathy and neutrality. Definitely worth reading.

An in depth look into what a CIA agent/spy life looks like and what compels a person to commit treason against one's country. The story was thoroughly investigated and well written. This is also a story about a family who has lost it's way as the result of a father that dismantled their lives through his greed and control. Great performance by the reader.

Great story that is captivating and moved quickly. I found it hard to put down, every time I listened. Fascinating story, I didn't want it to end!