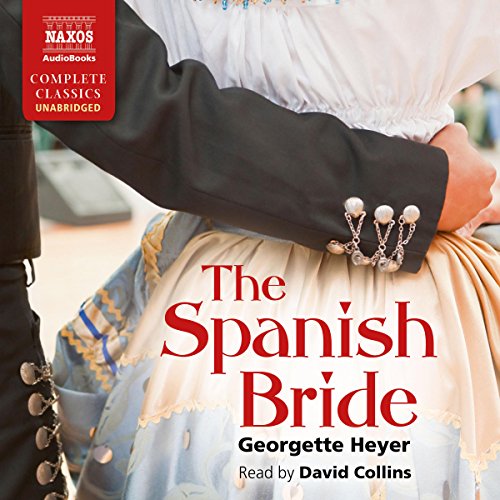 When Brigade-Major Harry Smith met the beautiful Juana María, an instant spark formed between the two fiery, energetic souls. The two fell deeply in love with one another from the first moment and the Spanish bride accompanied him throughout all his campaigns, where she rode freely among the troops. The intensity of their marriage is made all the more gripping as it is played out against the Peninsular War of Napoleon versus Wellington.

The Spanish Bride is both an endearing true love story and a detailed account of Wellington's battles and strategies, which Heyer studied intensely for this unforgettable novel.

I knew going in that this was not a light Regency like so many of Heyer's best books. But I found Heyer's account of the Battle of Waterloo in An Infamous Army not only entertaining but educational, so thought I would give this a try as well. And if you like your historical fiction heavy on history and light on plot, you will like this book.

Interestingly, unlike An Infamous Army, where the main characters were fictional but surrounded by real historical figures, in this book, even the main characters were real people. And it sounds like they were fascinating people, or at least they led a fascinating life together. Sir Harry Smith seems to be a real life Forest Gump or Zelig. He somehow managed to be on every continent and just in time to be in every major battle over the course of 30 years. He must have spent half his life on ships. And while I am sure Heyer embellished Lady Smith's character somewhat, the fact that she was a 14 year old war orphan just out of a Spanish convent when she met and married Harry Smith, that she followed Harry throughout his soldier's career and that there are so many towns named after her in Africa makes her a fascinating creature.

It gets a little dry as we slog through battle after battle in Portugal, Spain and France during the Peninsula war, but Heyer infused the journey with humor and graphic descriptions of the conditions.

I did not enjoy this as much as my favorite Heyer novels, but I found it very readable. I recommend.

One of my favorites, though not classic Heyer

This is one of my favorite books ever (and I thought it was very well read) but don't go into it expecting it to be like any other Georgette Heyer novel. I love the story of Harry Smith and his Juanita, and found it very romantic, but the true center of the book is indeed the historical detail, and military historical detail of that. Juana doesn't even show up until after a detailed description of the siege of Badajoz, which was a very nasty, bloody affair that Heyer describes in great detail. Not for the faint of heart.

The novel is compounded in great part from period autobiographies, diaries, and correspondence. Which may make it sound boring, except that the young men of the period seem to have all had a turn for description and a wonderful sense of humor. I was inspired to read a number of the original narratives that Heyer used for research, and can vouch that many of the incredible sounding episodes were indeed there. Harry Smith threw himself headlong into everything he did, and was remarkably successful at most of it--fighting, tactics, foreign languages, making friends with the most unlikely Spanish ruffians who could often be counted on to guide his regiment when they were lost. Johnny Kincaid, who apparently fell in love with Juana himself and gives quite a lot of detail about the Smiths, had a very wry sense of humor as well as a tendency to launch into Wordsworthian descriptions.

Juana de Leon, fourteen years old, is caught in the vicious fighting between the British and the French in the Spain of the Napoleonic Wars. She needs a hero to rescue her, and she finds that hero in Harry Smith. But Juana is no cowed child bride forced into marriage. When warned that she will find it very uncomfortable riding in the baggage train of the army with the other wives, and that she may not see her husband for weeks at a time, she says she thinks that sounds very unpleasant. Her solution is that she will ride with the regiment, and she charms permission from all concerned in order to do so. Harry's friends fear that he will shirk his duties if he has a wife by his side, but he and Juana agree that his work must always comes first. This means that Juana is often thrown on her own resources, and she copes with amazing ability. For instance, on discovering that she will need to ride a horse, she says that she will manage "for I have twice ridden on a donkey." And, in fact, she manages with determination and brilliance, her only argument being that Harry insists she ride with him leading her horse at first. They fight spectacularly and make up just as fiercely. She boxes his ears if he dares even look at another woman; he calls her his "little vixen." Juana seems to have truly loved campaigning, even the nights when the commissary lost the regiment and they end up eating acorns. In another day and age, she would have made as good a soldier as Harry.

I could go on for longer, but the review would end up being as long as the book. I loved this book when I read it as a teenager, and I think David Collins does a spectacular job of making the characters come to life.

The story was great and the narrator perfect. Excellent historical fiction. The inside story of a British officer's wife during the Napoleonic wars.

Couldn't even make it through....

I love Georgette Heyer's regency novels. I think she is a better and more interesting writer than Jane Austen. That being said, I decided to give all her regency novels a shot and made a list of them in order to be sure I read each one. This book however, missed the mark. I'll have to try it again later. It was so slow and so confusing. I trudged through the first seven chapters, forcing myself to keep listening, and finally called it quits.

Heyer likes to use real places and events in some of her books. In this one she uses the war in Spain. She goes into great detail to describe things in detail, which is what makes it so monotonous.

If you're looking for an amazing book by Heyer don't choose this one. I've almost completed my list of reading all her regency books.
I would recommend:
Black Sheep, Lady of Quality, The Grand Sophy, or The Nonesuch. She has many good ones but these are my favorites.

This book is more history than romance but knowing the research that Heyer put into all her books I’m confident that even the fictionalized portions are based on a true reading of personalities.

I have read every one of Heyer’s books and enjoy the lighter ones better than the more historical ones. But I still enjoyed learning about British history at her hands. I enjoyed it even more with Collin’s narration. He brought it alive. Sections that I know I glossed over when reading became more poignant or horrifying with his performance. His voices were distinguishable by character, inflections spot on, and humorous lines delivered flawlessly.

I plan on listening to all of Heyer’s novels and hope that David Collins is narrating others!

I have read Spanish Bride three times and this is my first time enjoying it through audio. Magnificent Reading! Through Collins voice, I felt like I was there, through every Battle, retreat, reuniting of two dear people. Mr. Collins did Heyer proud!!!

It’s a commitment, but worth it

I’ve tried to read The Spanish Bride in the past and haven’t managed it for a couple of reasons. Before I realised it was entirely based on fact (I knew the backdrop was historically accurate, but I thought the main characters were fictional), I wondered why Heyer made the choice of Juana’s age. Now I know that it wasn’t a choice, I’m okay with it. Also, there’s a lot of detail. A lot.
I’m thinking of reading it again with google earth open, so I can follow their progress... and maybe undertaking the Santiago de Compostella pilgrim’s trail so I can walk the same country. Now that I’ve experienced The Spanish Bride, I don’t want to just move on to another novel without a backward thought.

Most boring and unbelievable story

The bride is age 14. That’s disgusting. Then there’s the boring account of the military camp life and marches. Somehow the 14 year old girl raised in privilege adapts to camp life without complaint. She’s never ridden a horse but keeps up with the men riding. Really the worst book I’ve read in years.

A history of England's war against Bonepart

If you enjoy history and especially English battles, this book is an almost daily diary of the English war against Bonepart. The lives of the people who fought the battles, the lives of the people who served them and an in depth view of one couple who met and fell in love, then spent almost three years following the drum. What privations they lived through is presented as only Georgette Heyer could do. It was a little slow going at times, but I have a feeling the author meant for her readers to experience what her characters lived through. A very good book!

A Classic which never disappoints

Heyer’s beautifully written novel about the Peninsular War is both a touching love story and a masterful account of men and women dealing with the horrors of war. A splendid and accurate account of the war to defeat Napoleon.

I enjoyed listening to this historical account, albeit different from the other Georgette Heyer novels, a great story well told.