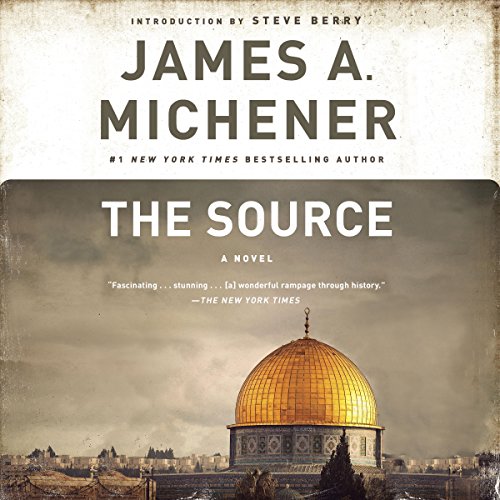 In the grand storytelling style that is his signature, James Michener sweeps us back through time to the very beginnings of the Jewish faith, thousands of years ago. Through the predecessors of four modern men and women, we experience the entire colorful history of the Jews, including the life of the early Hebrews and their persecutions, the impact of Christianity, the Crusades, and the Spanish Inquisition, all the way to the founding of present-day Israel and the Middle East conflict.

"Fascinating...stunning...[a] wonderful rampage through history...Biblical history, as seen through the eyes of a professor who is puzzled, appalled, delighted, enriched and impoverished by the spectacle of a land where all men are archeologists." ( The New York Times)
"A sweeping [novel] filled with excitement - pagan ritual, the clash of armies, ancient and modern: the evolving drama of man's faith." ( The Philadelphia Inquirer)
"Magnificent...a superlative piece of writing both in scope and technique...one of the great books of this generation." ( San Francisco Call Bulletin)

What would have made The Source better?

I’ve read most of James Michener’s books, on paper. The Source was my favorite, so although I seldom ever reread a book, this was a perfect Audible choice.

The book is as great as ever; however, the performance is so overdone that the distraction did not allow me to suspend disbelief and immerse myself into the story.

Larry McKeever is a bass baritone voice. The articulation borders on speech class drills and the deep roll offs are excessively fabricated. The reading is unconnected, and sound stress is not American English natural. For example, assuRED, laND, startED.

Many will love his voice. In my case, I became so distracted I returned the book after just a few hours. Apparently, I’m not alone.

What disappointed you about The Source?

I love the work of James Michener and a was looking forward to hearing The Source. Unfortunately, the choice of reader has made this book "unlistenable." While I'm sure the narrator put a great deal of effort into enunciating, the end result is a ponderous, almost monotone performance that sounds more like a computer-generated voice than an actual human.

This performance sounded like a computer was reading the book. I had trouble paying attention because the reading was so monotonous, but the story was interesting.

I read The Source years ago and loved it. This audio version is spoiled by the narration, which is wooden and robotic. Regretfully I will not finish listening to this wonderful story. It is unfortunate that all of Michener's books are narrated by the same reader.

I could not get through more than an hour of this because the narration is awful. Too bad as I like Michener books.

What made the experience of listening to The Source the most enjoyable?

I read Michner's books years ago and absolutely loved them. The narration for this story is terrible and I don't know if I can stand to finish the book. I won't buy anything using this narrator ever again. What a shame.

Don't know, can't stand to listen to this narrator any more.

For heaven's sake, get some updated narration. these are wonderful stories but Larry Keever reads like a robot.

Would you consider the audio edition of The Source to be better than the print version?

No, the print version of The Source is the better version. Michener's tale across the millenia is magnificent, with startlingly different characters with unique voices and personalities. Whether it's a modern Israeli, an ancient stone age hunter/gatherer, a Jewish trader in the first century CE. - they're all individuals and it's easy to hear that in their speech.

The narrator's relative monotone; his steady pace is serviceable but I think listeners won't get as much out of The Source from it. Better to experience Michener's text. I'd already read the book a few times so that I already knew my favorite parts and the narration didn't diminish my experience (but it didn't add to it).

Too many; every time period has some memorable figures.

I was greatly disappointed that The Source hadn't received an updated narration by a trained voice actor. This reading appears to be an early 90s (or even earlier) recording back when narrators simply read the story without inflection. Occasionally, Audible has some of those early books and they're wearisome (even if the story is good)

I'm a big fan of The Source; it's fascinating and compelling reading. I'm not a fan of this recording. I regret spending the credit on it but I'll keep it because Michener's millennia long story still intrigues me.

Save yourself this painful experience

I read this wonderful book back in the days when I actually READ books. It was captivating and, in light of today's political climate, I was eager to "read" it again. I'm horribly, terribly, awfully disappointed in the mechanical voice of the narrator. It absolutely makes enjoyment of the story impossible.

Listening to this book will take just about as long as the dig took to develop.

Who would you have cast as narrator instead of Larry McKeever?

Somebody who doesn't sound robotic.

Michener fans....if this Larry character is narrating the book you're thinking of buying...skip it.

Trying to slog through this

Years ago I loved reading Michener and was so happy when Audible finally had his books. I won't ever get another. The narrator absolutely drones on. The book is way too long and just a collection of stories over time.

I loved this book. It was interesting and complex with lots of layers. It sparked my interest to learn more of Judaism and Christianity.