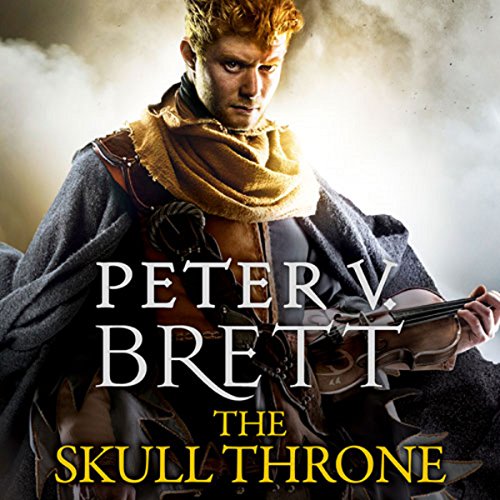 The explosive fourth book in The Demon Cycle series: The Skull Throne is written by Sunday Times best-selling author Peter V. Brett and narrated by Colin Mace in this complete and unabridged audiobook. Devotees of this series will not be disappointed and Mace’s performance is phenomenally engrossing. Powerful new characters and feared new worlds are introduced. Demons, dark magic and unified armies– all are battling for the glory and power of a seat at the Skull Throne. The demon army grows ever-stronger and the war against their rise must begin.

The Skull Throne of Krasia stands empty. Built from the skulls of fallen generals and demon princes, it is a seat of honour and ancient, powerful magic, keeping the demon corelings at bay. From atop the throne, Ahmann Jardir was meant to conquer the known world, forging its isolated peoples into a unified army to rise up and end the demon war once and for all.

But Arlen Bales, the Painted Man, stood against this course, challenging Jardir to a duel he could not in honour refuse. Rather than risk defeat, Arlen cast them both from a precipice, leaving the world without a saviour and opening a struggle for succession that threatens to tear the Free Cities of Thesa apart.

In the south, Inevera, Jardir's first wife, must find a way to keep their sons from killing one another and plunging their people into civil war as they strive for enough glory to make a claim on the throne. In the north, Leesha Paper and Rojer Inn struggle to forge an alliance between the duchies of Angiers and Miln against the Krasians before it is too late.

Caught in the crossfire is the duchy of Lakton - rich and unprotected, ripe for conquest. All the while the corelings have been growing stronger, and without Arlen and Jardir there may be none strong enough to stop them.

Only Renna Bales may know more about the fate of the missing men, but she, too, has disappeared....

Praise for The Demon Cycle:
"Peter V. Brett is one of my favourite new authors." (Patrick Rothfuss)
"I enjoyed The Painted Man immensely. There is much to admire in Peter Brett's writing, and his concept is brilliant. There's action and suspense all the way." (Terry Brooks)
"The Painted Man works not only as a great adventure novel but also as a reflection on the nature of heroism.' (Charlaine Harris)
"[Peter V. Brett is] at the top of his game. I give this my highest recommendation." (Tor.com) "[Brett] confirms his place among epic fantasy's pantheon of greats amid the likes of George R.R. Martin, Steven Erikson, and Robert Jordan." (Fantasy Book Critic)
"The most significant and cinematic fantasy epic since The Lord of the Rings. Inspired, compelling, and totally addictive!" (Director Paul W. S. Anderson)

Even better than the second and the third

These series is amazing. And the author even managed to make this one better than the 2nd and 3rd.

Sometimes I fell asleep. I had to rewind multiple times to get what's being said.

Gave up half way through. The fleeting glimpses of interesting action and development were drowned out by annoying intrigue and squabbling.

Great sequel in a great series.

After part 3 left me a little less enthusiastic about the series due to some in my opinion unnecessary length, this part was action driven and captivating all over again. I can't wait to start the next book.

The story doesn't loose its edge. It still thrills me and lets me look forward to the next opportunity to listen on...even if it is for just 10 minutes.