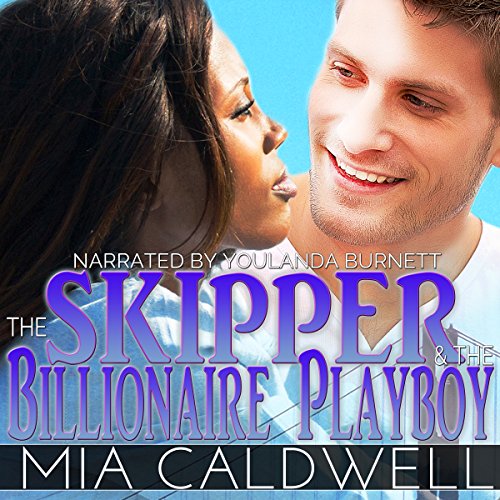 The Skipper & the Billionaire Playboy

Nadia and Sawyer are total opposites. The billionaire playboy is an irresponsible womanizer. She's a serious, pragmatic sort, with her eyes firmly on achieving her dream of winning the America's Cup. As the skipper of his yacht, she should refuse his outrageous suggestion to pose as his girlfriend during a visit to his family, but the money he offers means reaching her goals faster. She expects his family to hate her and disapprove of his choice, but they're warm and welcoming. The deception proves too much for her conscience, and she has to end the ploy. Sawyer is all for that, but has an unorthodox suggestion for making their agreement work. What if they stop pretending and give in to the attraction simmering between them? Can Nadia live with that, or is she making an even bigger mistake?

Great job with the story. Mia Caldwell does it again. Of course the story has a happy ending but, the REASON for the the drama that happens in the story will put tears in your eyes. This story mention the color differences as just a discription and mattr of fact. Think this story was cute and well written. A great purchase with diversity and drama with some steamy sexual situations.

this could have better with different narrator

tThis story could have been so much more. I found missed opportunities with the lack of communication, lack of understanding, and just the plain lack of. I guess that enhances the story but it also took away from it. The narrator did not make things any better because everything all sounded like females. I mean even the men sounded like women and it just detracted from the story for me. I was saddened by this and I'm going to start staying away from this particular narrator because there seems to be no depth to her vocal diction or her pitch. I mean just no emotions are there.

The story was good and that was the only thing that kept me listening to the horrible narrator's voice. Not only did every character sound the same, making it hard to distinguish between who was talking unless there was a 'he said' or 'she said' there to help you, but she also mispronounced some words! If I stopped the book and came back after a while, I would physically cringe when the narrator's voice started up again.

This book was ok. It was very basic, however an OK read since I was really looking just to decompress. However the narrator was truly awful!!! She read with no expression, nor was she able to differentiate the voices of the main or supporting characters. But my biggest complaint about the narrator was her lack of knowledge with how to pronounce certain words; basic words. It almost felt like, in some instances, this book was the first time she was ever seeing these words. She could not have possibly read the book prior to narrating, and no one bothered to edit the book. Disappointing!

I really enjoyed this story, my only problem was the narrator... Her voice was muffled and quite boring... I hope it's a part 2 to this book...