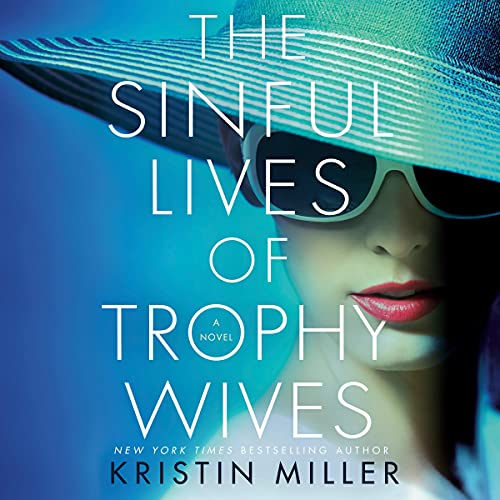 The Sinful Lives of Trophy Wives

Meet the trophy wives of Presidio Terrace, San Francisco's most exclusive - and most deadly - neighborhood in this shrewd, darkly compelling novel from the New York Times best-selling author of In Her Shadow.

Mystery writer Brooke Davies is the new wife on the block. Her tech-billionaire husband, Jack, 22 years her senior, whisked her to the Bay Area via private jet and purchased a modest mansion on the same day. He demands perfection, and before now, Brooke has had no problem playing the role of a doting housewife. But as she befriends other wives on the street and spends considerable time away from Jack, he worries if he doesn’t control Brooke’s every move, she will reveal the truth behind their “perfect” marriage.

Erin King, famed news anchor and chair of the community board, is no stranger to maintaining an image - though being married to a plastic surgeon helps. But the skyrocketing success of her career has worn her love life thin, and her professional ambitions have pushed Mason away. Quitting her job is a Hail Mary attempt at keeping him interested, to steer him away from finding a young trophy wife. But is it enough, and is Mason truly the man she thought he was?

Georgia St. Claire allegedly cashed in on the deaths of her first two husbands, earning her the nickname "Black Widow" - and the stares and whispers of her curious neighbors. Rumored to have murdered both men for their fortunes, she claims to have found true love in her third marriage, yet her mysterious, captivating allure keeps everyone guessing. Then a tragic accident forces the residents of Presidio Terrace to ask: Has Georgia struck again? And what is she really capable of doing to protect her secrets?

Before you write about rich wives - research them

The story framework was there. It had potential to be great - sort of like a Big Little Lies….or it tried to be. The author list me completely when she equates the famous red bottom shoes with Louis Vuitton and not Louboutin. I mean COME ON!!! I listened to it twice just to make sure I heard it right. If you are going to write about rich Trophy Wives - you should know the difference between Louis Vuitton and Christian Louboutin.

This is a ridiculous story full of characters you’ll love to hate, but if I have to read/ listen to a book about privilege, this is how I wanna do it. I love that the author didn’t use wealth to make a big, deep political statement, but to entertain the listener, which is why I listen to fiction.

I’m not going to give anything away, but my favorite line of the book was, “f$&@ all y’all. Except you Monique, you’re my girl.” 😂 I have been craving these big, spoiled personalities. After two years of so much drama, fear, anger & stress, it feels good to be able to laugh versus being forced to take everything so seriously and offensively.

As for the narrators, unlike some of the other reviewers, I think they were pretty spot on for their characters.

Just take this book for what it is & don’t pick up apart all the goofy details that really don’t make sense (such as the accepted suggestion that the letters weren’t coming from anyone in neighborhood since “a mailman was delivering them”), and I think you’ll enjoy it.

Don’t waste your time or credit

This girl has definitely no idea how women with money spend it. ( good catch on the shoes) stopped reading right there. What was I thinking wasting a credit on that? Shame on me , not even my genre

A guilty pleasure along the lines of the real housewives, but with a body count. Devoured it!

a soap opera but I love it

A fun book, very much like a soap opera. Totally not believable!!! Fun characters and a fun ending.

This is simply awful. It is laughably bad. The plot is inane, the dialogue and writing is amateurish, and the narration is terrible.

run of the mill "thriller" with very little worth staying for. it's ok to pass the time, but more really juicy or engaging

You will over-indulge in each page of this book as though it we're a box of chocolates and you can't stop popping then in your mouth. This book it not realistic and i loved it for it's garish, over the top characters. And soap opera like drama. The plot was good and there was an interesting twist at the end. So it was an indulgence credit and it went easy listen that I didn't have to think to much about. I was able to enjoy the mysteries and twist and turns. Just what I needed to cleanse my palette.

This is a beach type read. Not a lot of substance, but easy to listen to.

Because sometimes murder is easier than divorce

Soap opera-intimate in the best “guilty” way with a smattering of sociological anthropology-sequence zingers about a certain, specific category of women.
Obviously, the flagrantly novice “red-soled Louis Vuitton pumps,” comment, noted by another reviewer should have been caught in copy/line editing/beta reader—*somebody,* because that is just, well—sad, but these “trophy wives” are a bit second-string like that, so maybe it’s actually fitting.
If you just go with it, suspend reality, wildly implausible scenarios, plot holes, & disregard for typical law enforcement jurisdiction/protocol & investigative techniques, it’s actually quite entertaining.
The narrators are excellent & I enjoyed giving in and just going with the flow & being entertained.