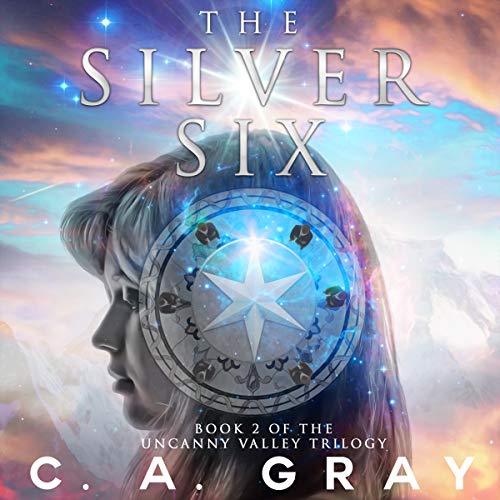 Rebecca Cordeaux's entire world has been turned upside down. In a single day, she's learned that Senate Leader Halpert and his board of advisors are actually illegal humanoid robots created underground 20 years ago - and they tried to have her killed. Her mother, Karen, whom she always believed to be passionately against the cause of the Renegades, turns out to be their leader. And Liam, a man she never thought she cared for, is now fighting for his life - and she finds that she cares desperately.

Fortunately, Karen, known to the Renegades as M, has planned for exactly this sort of eventuality. Using Rebecca's father's blueprints, Karen patiently built an underground compound in an abandoned part of the Americas where they can regroup and plan for the coming war. The compound becomes an unlikely oasis as their number grows, both on accident and on purpose.

In attempting to recover her best friend and companion bot, Madeline, Rebecca gets what she thought she'd always wanted: Andy arrives at the compound, too, along with her friends Jake and Julie. But with the sudden addition of an old flame from Liam's past, Rebecca discovers just how little acquainted she has been with her own heart.

Meanwhile, the Silver Six are running a worldwide campaign of indoctrination to ensure that the people are on their side. In the name of peace, they want nothing more than to wipe out every shred of resistance while pursuing their ultimate goal of robotic superintelligence. With the assistance of a neuroscientist who helped to build the Silver Six decades ago, Rebecca attempts to understand how synthetic minds work, hoping this information can be used against them. She's sure the mysterious, brilliant, and beautiful Alessandra Russo is the key somehow, but Alex's hatred for the Silver Six is only matched by her hatred for the Renegades.

Can the Renegades find and exploit the weakness of the Silver Six before synthetic intelligence passes the point of no return?

I'm really enjoying this series, and especially that it parses huge ideas with a very character-centered story. This book picks up right where the last one left off, and while I can't say it's nonstop action (It isn't, and that's okay! That's not the feel of this book.), it's definitely non-stop intrigue and character drama as Rebecca and gang hide out from the government.

I really loved some of Rebecca's solutions to how to save the world, and the introduction of some new characters brought out features of previous characters in new ways.

One thing I had a hard time with was the portrayal of Francis--not necessarily his character, but how others around him constantly malign him. He's portrayed in the first book as autistic, and as an autistic adult myself, I was disappointed that everyone seemed to look down on him or be outright mean (though, granted, he had some of it coming), instead of recognizing his neurodiversity and celebrating his strengths. In the second book, I had a really hard time with how Francis was portrayed, because he's shown in this one to be a sociopath and lacking empathy--shown with physical brain scans that this is true. This really saddened me, because autistic people are often wrongly portrayed as lacking empathy or emotion, when often the opposite is true. We often have too much. And equating autism with sociopathy is really harmful. This portrayal soured for me what would have otherwise been a new favorite book.

If you are sensitive to autistic issues or depictions of people with neurodiversities, I would honestly avoid this book. If you are not, please be aware that the way it's portrayed here isn't a socially or medically true portrayal of autism.

I received a free review copy at my request and voluntarily left this review.

When I read or, rather, listened to Uncanny Valley, the first book in the trilogy, I was pulled into a vortex of misdirections and revelations, especially towards the end and that alone made me anxious to read the next book. The Silver Six is every bit as intriguing as the first book.

Now that Rebecca and the rest of the Renegades know that the Silver Six, lead by Halpert, are actually robots, all the earlier conspiracy theories have been proven correct. War is inevitably coming and the Renegades must plan for it while they work to subvert Halpert’s propagandizing. That in itself is perhaps the most critical part of their fight because humans are so gullible, easy prey for the lies that are so much more comfortable than truth.

And because life goes on, no matter the circumstances, Rebecca can’t help being distracted by the two young men vying for her attention. As so often happens, one of them will be found wanting but is it possible that the Resistance will be affected by this?

Melissa Williams is a better than average narrator, easy to understand and with good pacing. I couldn’t always distinguish one character from another but that didn’t impede my enjoyment of a strong tale with lively action. I appreciate this second book as much as the first; come back tomorrow to see what I think about the trilogy’s conclusion .

This Was A Pleasant Surprise

This was a story that could very well be our future. Since i won't be around, I'll just have to take my word for it. It reminded me of the science fiction shows that I used to watch growing up. The one thing I wasn't happy about was that the book came to an end. The good thing is that I've got the third book in my library ready to go. But I did feel slightly shortchanged since I haven't read book one - will have to get that changed.

I thought that Ms. Williams did a good job at bringing both the character, Rebecca Cordeaux, and her world to life. She sucked me into the story so that I felt a part of what was going on. The issue I had was that Rebecca seemed to have a high pitch voice. For people that are hearing sensitive, it makes it hard to concentrate on what she's saying. I kept having to play with the volume which did take a iittle away from what was going on. I'm interested to see if that continues in book three.

This book shows what a creative mind Ms. Gray has. She takes us on a journey into a world where bots have a humanoid appearance as well as thoughts. The book/movie from my youth was 2001: A Space Odyssey. This book takes it a step further. It might be a warning of what could happen if we're not careful. By the time I got to the end, I decided that having an "e" copy of the book wouldn't be a bad thing.

I voluntarily reviewed an Audiobook copy of this book.

As the story continues it is keeping my attention. So much so that i do not want to put it down. This would make a great movie. Lots of technology along with the story. Love it!