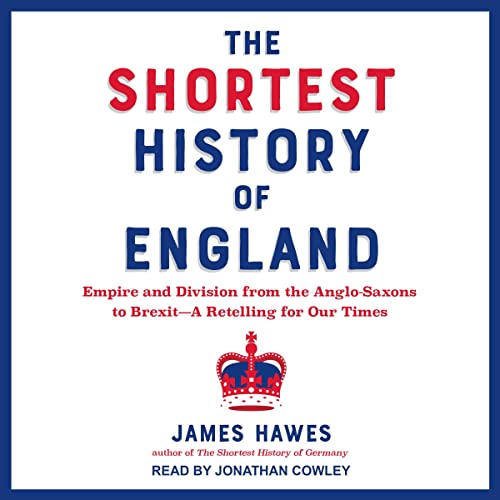 The Shortest History of England

England—begetter of parliaments and globe-spanning empires, star of beloved period dramas, and home of the House of Windsor—is not quite the stalwart island fortress that many of us imagine. Riven by an ancient fault line that predates even the Romans, its fate has ever been bound up with that of its neighbors, and for the past millennia, it has harbored a class system like nowhere else on Earth.

This bracing tour of the most powerful country in the United Kingdom reveals an England repeatedly invaded and constantly reinvented—yet always fractured by its very own Mason-Dixon Line. It carries us swiftly through centuries of conflict between Crown and Parliament (starring the Magna Carta), America's War of Independence, the rise and fall of empire, two World Wars, and England's break from the EU. We discover why the American colonists of 1776 believed that they were the true Anglo-Saxons, how the British Empire was undermined from within, why Winston Churchill said the UK could only be saved by splitting up England itself, and how populism spawned Brexit and its "new elite."

The Shortest History of England brings all this and more to prescient life—offering the most direct, compelling route to understanding the country behind today's headlines.

Being very short, it's hardly worth buying for a true history. What you get is very reductive, sometimes thought-provoking, more often shallow and imperceptive. No, indentured servitude, whether English, Irish or otherwise, was not virtually the same as chattel African slavery. The convenience of the brevity of the book is that it never has to actually support some of its claims. If you don't have a real book ready to start, it's not terrible as a bridge book, but if anything in the book piques the interest, it'd be best to check more reliable sources.

The content is very biased, English “race”? Come on!
The actor/reader simply terrible. Doesn’t sound human. Speaks flatly and reads into the parentheses with no kind of pause or whatsoever.