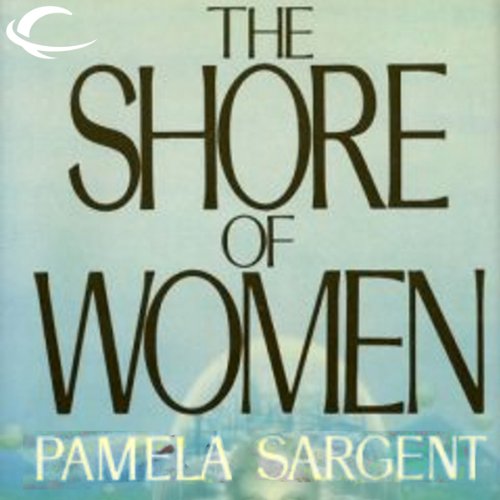 The Shore of Women

The Shore of Women

Women rule the world in this suspenseful love story set in a post-nuclear future. Having expelled men from their vast walled cities to a lower-class wilderness, the women in this futuristic universe dictate policy and chart the future through control of scientific and technological advances. Among their laws are the rules for reproductive engagement, an act now viewed as a means of procreation rather than an act of love. In this rigidly defined environment, a chance meeting between a woman exiled from the female world and a wilderness man triggers a series of feelings, actions, and events that ultimately threaten the fabric of the women's constricted society. Trying to evade the ever-threatening female forces and the savage wilderness men, the two lovers struggle to find a safe haven and reconcile the teachings of their upbringings with their newly awakened feelings.

What made the experience of listening to The Shore of Women the most enjoyable?

The voices of the actors make listening to this book as good as a film. The characters had rich texture revealed by adept narration of Sargent's engaging text.

The first person perspectives of Arvil as he struggles with radical change of his surroundings, his faith and ultimately in his very understanding of the workings of the universe, make the story a true adventure.

What about Stephen Largay and Sarah Ellis ’s performance did you like?

The performances are first rate. Largay produces an array of voices that vividly depict the wild world outside the walls of the city. He brings to life the gruff, the arrogant, and the meek among the men that Arvil encounters. The voice brings out Arvil's frailty and his wonder at the changes around him. Sara Ellis's portrayal of Birana contrasts sharply with Largay's earthy overtones. She brings a crisper and more sterile tone to her voice, which brings to life the sterility of life within the city walls.

On the first day, I listened for hours - on the way to work and then back again...then I played the story through my phone in my breast pocket around the house all evening as I cleaned the house, so I could listen more.

I look forward to listening to more of Largay's work.

Too much world building with an agenda ...

I checked this book out at the request of my daughter. She was listening to it and wanted to have somebody to talk to about it.

My first reaction upon beginning this book was, wow, there is a lot of world building happening, and I had a difficult time caring. This story felt like an extreme and obvious vehicle for pointing out an injustice that I think very few people have difficulty in recognizing (regardless of their personal takes on feminist issue's). It did very little to bring attention to the subtler and perhaps more insidious symptoms and problems of a society struggling to reduce the gap in such power schisms, or to demonstrate the new problems that such changes can bring.

I liked some of the characters but the book was incredibly slow paced for as much as ostensibly took place within it. I also felt as though the device of the book was, as I've already mentioned extreme and obvious, but ultimately made no real point. At the end of it I saw no suggestions for answers or changes or hope of any kind. It was a sermon of fire and brimstone with no ultimate offer of a savior or sanctuary.

I listened to this book for "free" through the Amazon Prime program, and I am glad that I didn't spend actual money on it. I don't know that I'd take back the 12+ hours I spent listening to it ... I mean, if nothing else it did get me thinking, and I am sure my daughter and I will have an interesting conversation about it. I won't be sorry it isn't in my permanent library though as it is not a book I can ever imagine feeling compelled to revisit.

I didn't care for the narration, and the story was slow and seemed like it was written by a novice writer not someone has won awards. I will not be recommending this book to anyone. It was a credit wasted.

3rd Wave Feminist: This Future is Hard to Stomach

Would you try another book from Pamela Sargent and/or Stephen Largay and Sarah Ellis ?

Yes, definitely. I can't believe Audible hasn't given Stephen Largay more work - this is his only narration on the site!

Arvil, period. I loved his awe and confusion and naiveté at the beginning, which was obvious from the writing but made so genuine by the exquisite narration. There was the perfectly paced growing confidence of the character, again voiced expertly. By the end, he is almost a different person, and having been there to watch him develop into a man made him feel like family. Not like a son, but maybe like watching a favorite nephew grow up right in front of you.

Did Stephen Largay and Sarah Ellis do a good job differentiating all the characters? How?

Yes and no. I cannot say enough about Largay's skills in narration. Many of his voices were quite different from each other, making it obvious when different people were speaking. I think he did a fine job with the female characters, unlike Ellis. I disliked so much about Ellis' performances. So much of the beginning of the book is voiced by her, and I think it made it much more difficult for me to get into the story. I didn't like the way every chapter by her seemed to be jarring, having no flow from whatever came just before, as if the start of every recording she did required her to re-discover the voice of the characters. There was very little differentiating between her characters. Near the end, she voices a male character and he sounds ridiculous. There is a character in the book whose name each of the narrator's pronounce differently, and that drove me nuts.

Another review appreciated Ellis' job of creating cold-sounding characters. Maybe so much of what I disliked about her performance was on purpose, right down to undifferentiated female voices. After all, the women are living in a society where they are practically clones of each other because of strict doctrine. I would be interested in trying something else of hers to test this theory, to see if she does warm characters well. Unfortunately, Audible hasn't seemed to put her to work for anything else either.

Did The Shore of Women inspire you to do anything?

It inspired me to review the book. I cannot express in words how the character of Arvil, especially the narration by Largay, moved me. There is a scene that is terrible to listen to, hearing a very young man (still a boy really) describe the horrors of a massacre in real time. The pauses to find words or just to find the will to finish the thought out loud, the cracks of voice that grows raw from tears... The sound of his struggling voice - not the words themselves - in that scene stayed with me for days, even after I had finished listening and gone on to another book. But wait until you hear him voice Arvil's awe. It was worth the time spent on this book just to experience that awe and wonder describing the goddess, devotion, and the body of woman. Incredible.

It should be required reading for feminists. We should be reminded regularly, daily even, that men are not a different species. They are our partners. Women and men can do anything, including surprise you, because we are all human and that's in our humanity, not our gender. Anti-feminists who get ahold of this will be jumping up and down, pointing and hooting and claiming "I told you so!" until they are hoarse. As an old-school, Third Wave feminist enjoying the new freedom that comes with the allowance of celebrating all things female by Fourth Wave feminists, I am left scratching my head harder at the mere existence of a "I don't need feminism" movement. This book was written when feminism wasn't all inclusive, wasn't embracing and accepting - and look at what a stark, cautionary tale it is. This is an example of how feminists have known for quite some time that equality isn't about dragging down men and attacking women who don't see things quite the way we do. And yet, anti-feminists seem hell-bent on attacking feminists and putting men on pedestals. Irony is only funny when nobody is being hurt by it.

Great sci-fi with women in charge

This book reminded me of the "Maze Runner" or " Divergent". Set far enough in the future to be believable. It is a YA novel with characters under 18 but written for mature audiences. I would caution parents to at least NC17. This story has some relevance with todays social issues and I applaud the author's creativity. The two narrators were excellent. This story really needed both a male and female. I kept finding myself sneaking off to listen whenever I had a chance.