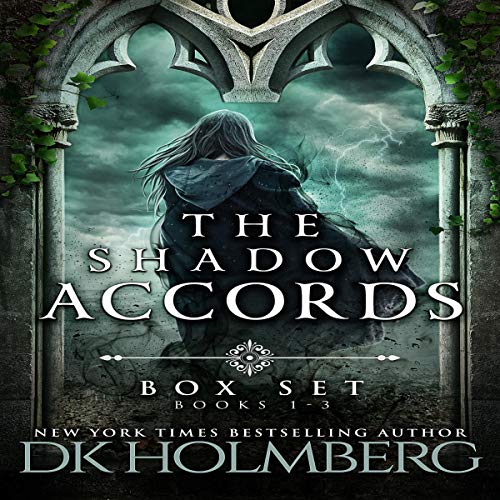 The first three audiobooks in the best-selling Shadow Accords series!

Orphaned in a foreign city. Able to control the shadows. Gifted with the A'ras flame. Carth must do more than master her powers to stop a dangerous threat, she must first master herself.

The A'ras of Nyaesh have a terrifying reputation: Skilled swordsmen, owners of powerful magic, and ruthless killers. When they kill her parents, Carth discovers her parents had trained her for magic she never knew she possessed.

She must use the skills they taught to stay alive, discover a way to find answers, and avenge them if she can. Only the discovery of a greater threat than the A'ras forces her to risk herself for new friends and a home she never wanted.

When Carthenne Rel first came to Nyaesh, she feared the A’ras. Now she trains with them, struggling to use the magic they teach, and cut off from the shadow blessing within her. Isolated for her differences, she has only a few friends among the other students. When the strange and powerful Master Invar offers to teach her to access the powers warring within her, Carth is isolated even more.

As the deadly Reshian attack the city, Carth discovers a secret, one linked to the shadows she must suppress, and the combination of her magic is key to the A'ras survival. She needs to master her abilities as an even more dangerous threat appears, one that changes everything she’s become, and challenges everything she knows about her past.

Carthenne Rel survived the Hjan attack on the A'ras and has left the north, the only place she ever really known. Now she travels to better understand what it means that she's shadow born.

Stranded by storms in a dangerous port city, she's captured while helping rescue a young girl from slavers. Discovering her mysterious captor's agenda forces her to play his games in order to escape, only to realize she hasn't finished with the Hjan. The lessons her captor has taught just might be the key to defeating them for good while protecting all of the north.