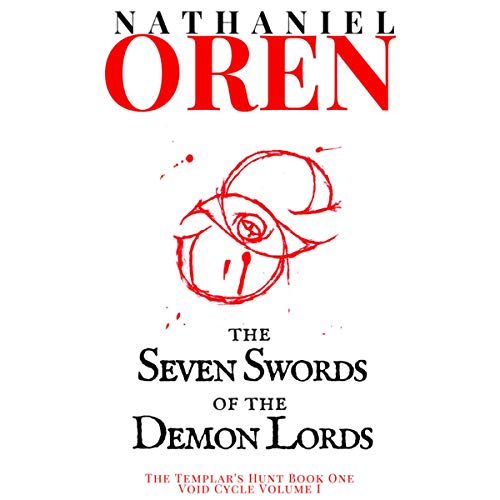 The Seven Swords of the Demon Lords

The year is 1432 Post Era Atlantica. It’s been nearly 2,000 years since the sudden and mysterious collapse of the greatest empire the world has ever known. Civilization has clawed its way back from the ashes of the dark age that followed, and new governments have risen from the chaos to bring order to the world.

Conflict continues to threaten the tenuous balance of peace, yet echoes of the past remain, haunting the present. General Septimus Klaver, knight of the Feudalistic Templar order and widely considered the greatest warrior in the world, finds himself forced into a diplomatic mission by his superiors.

Multiple attempts at his assassination evolve into a web of mystery and intrigue, drawing the old soldier deeper into an ancient conspiracy. Forced to fight for his survival, what he soon discovers defies all logic and challenges what humanity claims to know as true. Septimus is about to find that there is more to lore than lies and that the fate of the world may very well hinge upon a myth.

The eternal eye is rising. Enter the void cycle.


The story isn't the normal run-of-the-mill fantasy with a fun world. Septimus is a champion of the Knight's Templar and he can slow time down. It is almost a redemption of him through the story because he regrets his actions from before. I really enjoyed it, and I think someone else will enjoy the story too.

I was given a free copy for my honest review.

This was okay, but not spectacular. The world was fun, with different historical empires still around today, and each with their own distinct flavour and reason for wanting to be top dog. The hero, Septimus, is a champion of the Knights Templar, a legend in his own right. He is trained in a martial art that allows him to slow time (also kinda cool). Along the way, he begins to regret his method (kill first, ask questions later), and chooses to amend his ways. He comes into contact with an equally skilled fighrt known as the Lynx, and his investiagtion into the Lynx's backgrond leads him to a much biggerr mystery, involving the titular Demon Lords. The narrator was solid, although he read a little too fast at times.

Reminiscent of "Son of the Black Sword"

There are many elements of this story that remind me of Correia's "Son of the Black Sword", which I also enjoyed and I believe so will other fans of that series. The main character of this story, Septimus, starts much like Ashok, is driven by his perceptions of duty and honor to disregard all else in an almost mechanical way, sometimes even disregarding logic. There is also familiarity of the fallen great empire and main character being a famously powerful warrior with poor skills and politics and the existence of unique swords that can't be wielded or require special owners. Despite all of these similarities, the distinctions as well, with steampunk elements and the foundations of the mythological elements serving to keep me wondering about the mysteries to be uncovered.

The narration was okay, but there were some notable pacing issues with pausing that are common with newer narrators. The narration also has a monotone quality that does not reflect the scene's emotion in many cases. Overall better than a lot of self-narration, but probably would be better if done professionally in sequel.

I would like to see what happens next as the conspiracy is further uncovered, though hopefully narration improves.

I was given a free copy of this audiobook in exchange for an unbiased review.

This one was a bit hard to follow for me. I had to restart it several times to make sure I wasn't missing something. I really did enjoy it. There's a deep level of sarcasm and dark humor involved in it. The book itself has some really interesting concepts that I enjoy, but I do still feel like I'm missing something. I don't think that listening again will be a burden though. I just want to make sure I'm getting the whole picture in all of it's glory.
“I received this book in exchange for an honest review”.

Interesting enough the Narration though...

The narrative was interesting, this would have been an excellent book to read, The narrator however is obviously not an experienced narrator, he's fairly monotone and much of the excitement and feeling I would infer from the events are lost because of this.

There are a few small problems with the story itself but nothing particularly damning. For a portion of the story I am at a loss as to what the main characters motivations are and why he's following the plot, then the character and his allies ask why he's doing it and he's like I don't know. It was pretty comical, even the characters don't know why they are so wrapped up in the story.

The story is complex there is a lot of backstory and lore that builds the world into something like a skewed version of our own world with hints and direct associations to ancient mythology it is fairly compelling.

Overall it was a pretty good book but Oren Needs to hire a professional narrator for future installments.

This had a little bit of steam punk and dungeons and dragons with a good plot and plenty of action.
However, you would have not known this is a good book from the cover, unfortunately it does not do the story justice. I would have not picked up the book based on the cover.

Seven Swords of the Demon Lords turned out to be so much more than I expected. It doesn't just follow the figure-everything-out-in-the-first-five-minutes formula so common in fantasy adventure. There's even likely to be a thing or two you don't see coming until it happens. Sort of a rare treat. Our hero is always thinking and makes clear choices, even when he knows it is a bad idea. And well, maybe he is also just a bit broken, which I enjoyed. The power/magic system in the book is much like how SW presented the force before the midichlorian mess. It is fairly well explored and is interesting.

Narration also far exceeded my expectations. Honestly, I tend to get a bit nervous when I see an author narrating their own work. But Nathaniel Oren does a great job with it. His portrayal of the hero actually reminded me a bit of a certain other dark knight and we even get a villain who has some notable similarities to the other dark knight's nemesis.

This book was a fun experience and I highly recommend it.

I received this audiobook for free in exchange for my honest and unbiased review.

The story is great, but the narrator's performance pulls you into the story! Amazing Performance