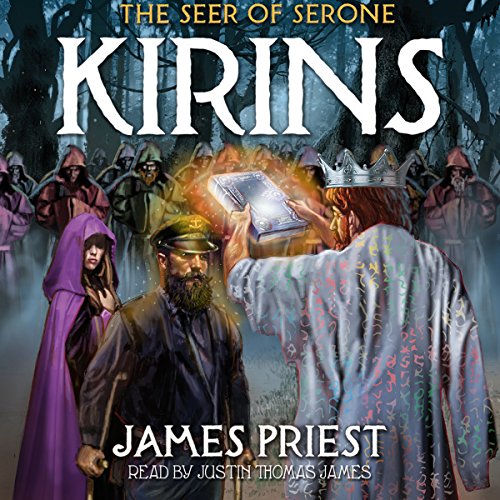 A race of tiny magical beings lives on Earth today. But humans are totally unaware of their hidden civilization. They are kirins. While a group of daring explorers battles to save the kirin race, a disgruntled magician interrupts a worldwide spell, making kirins everywhere suddenly visible.

Taking advantage of this breach, Jeremy Bailey, an Alaskan fishing boat captain, captures a kirin named Till and, under threat of torture and violence, exploits his gifts for Bailey's own benefit. With wiles and magic, a party of kirins fights back and ultimately delivers the belligerent, pistol-wielding Bailey to The Seer of Serone, a widely esteemed wizard who will bring the infamous human to trial. But will he be a changed man before they meet?

Join these bold adventurers through another exciting journey as they clash with a new and unprecedented foe.

I loved this journey through Alaska and the unusual cast of characters—Jeremy Bailey, the shameless fishing boat captain; The Seer of Serone - a reclusive wizard; and the kirins who stole my heart. Quite entertaining!

good storyline that doesn't wrap up too fast

this book is got a great story lines that doesn't wrap up to quickly at the end of the book. Like the writer is ready to be done. I really enjoyed the character development and discovery that happened throughout the story.
the narrator did an excellent job staying in character throughout the book. Easy to listen to

Great book that will appeal to all ages

So, this book really reminded me of that old cartoon, The Littles, but with more magic. If you're not familiar with that show, it is about a bunch of tiny people that live hidden among humans. It is definitely geared towards a younger audiance. In fact, my son just started listening to it, at my suggestion. So far he has really enjoyed it. For the record, he's 10. Anyway, the narrator does a great job of bringing the story to life in your imagination and I think this book would appeal to listeners both young and old. Well worth the listen, if you ask me.

I received this audiobook free for an unbiased review.

Overall a decent listen. It may be for a bit younger listener though. There are obvious life lessons taught here.
The narrator is well spoken and knew the book well. His delivery was well done, but again may be more geared for younger listeners(I’m late 40’s).

Overall I would recommend this book to my friends.

Very enjoyable audio. The narrator did an excellent job bringing the characters to life. Mr. Priest created a magical new world,
while entertaining for adults, would make a great kids movie.
This is my opinion only & should be considered with others as a whole.This audio was given to me free at my request & I made this review voluntarily. Thank you for the opportunity.