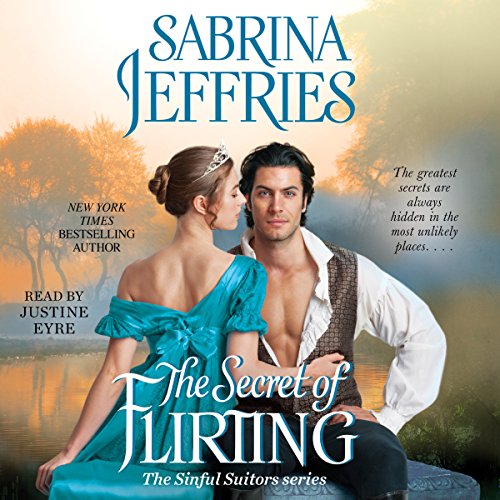 The Secret of Flirting

"Quick pacing, witty dialogue, and charmingly original characters set Jeffries' books apart" (Publishers Weekly), and The Secret of Flirting is the next thrilling romance in the best-selling Sinful Suitors series!

The moment spymaster Baron Fulkham meets the stunning Princess Aurore of Chanay, he's positive her royal persona is a ruse and that she's actually Monique Servais, the mysterious actress he met three years before in Dieppe. But as he pursues his suspicions, he uncovers a plot of attempted assassination and betrayal that could very well destroy his career, expose his own secrets...and ruin the woman he's rapidly coming to love.

The Secret of Flirting is a sizzling historical romance filled with fast-paced storytelling, an enchanting heroine, and a sexy hero, perfect for fans of Regency romance.

Another great book by Sabrina Jeffries!

This was another great book series by Sabrina Jeffries. Loved the narration by Justine Eyre.