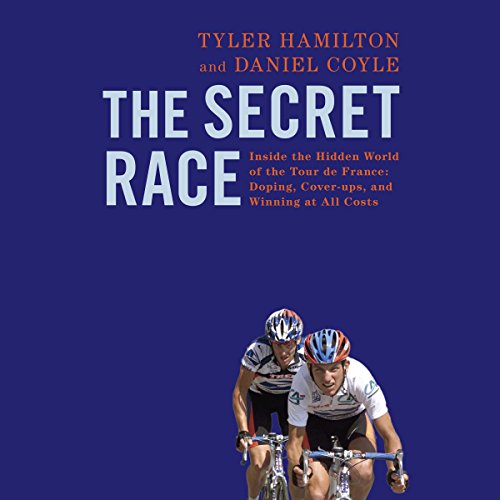 The Secret Race is a definitive look at the world of professional cycling—and the doping issue surrounding this sport and its most iconic rider, Lance Armstrong—by former Olympic gold medalist Tyler Hamilton and New York Times best-selling author Daniel Coyle.

Over the course of two years, Coyle conducted more than 200 hours of interviews with Hamilton and spoke candidly with numerous teammates, rivals, and friends. The result is an explosive book that takes us, for the first time, deep inside a shadowy, fascinating, and surreal world of unscrupulous doctors, anything-goes team directors, and athletes so relentlessly driven to succeed that they would do anything—and take any risk, physical, mental, or moral—to gain the edge they needed to win.

Tyler Hamilton was once one of the world’s best-liked and top-ranked cyclists—a fierce competitor renowned among his peers for his uncanny endurance and epic tolerance for pain. In the 2003 Tour de France, he finished fourth despite breaking his collarbone in the early stages—and grinding 11 of his teeth down to the nerves along the way. He started his career with the U.S. Postal Service team in the 1990s and quickly rose to become Lance Armstrong’s most trusted lieutenant and a member of his inner circle.

For the first three of Armstrong’s record seven Tour de France victories, Hamilton was by Armstrong’s side, clearing his way. But just weeks after Hamilton reached his own personal pinnacle—winning the gold medal at the 2004 Olympics—his career came to a sudden, ignominious end: He was found guilty of doping and exiled from the sport.

From the exhilaration of his early, naïve days in the peloton, Hamilton chronicles his ascent to the uppermost reaches of this unforgiving sport. In the mid-1990s, the advent of a powerful new blood-boosting drug called EPO reshaped the world of cycling, and a relentless, win-at-any-cost ethos took root. Its psychological toll would drive many of the sport’s top performers to substance abuse, depression, even suicide. For the first time ever, Hamilton recounts his own battle with clinical depression, speaks frankly about the agonizing choices that go along with the decision to compete at a world-class level, and tells the story of his complicated relationship with Lance Armstrong.

A journey into the heart of a never-before-seen world, The Secret Race is a riveting, courageous act of witness from a man who is as determined to reveal the hard truth about his sport as he once was to win the Tour de France.

I normally spread my listening of a book out over a few weeks but the honest, detailed and shocking story that is told meant that I got through it in less than two days.

The book gives an exceptionally good sense of how riding and doping at the professional level worked. The detail about the relationship between riders, doctors and the UCI provides a compelling story about what made professional cycling tick.

For fun I'd suggest you listen to Armstrong's It's Not About The Bike and then listen to this book. The image Lance portrays of himself in the former and the picture painted of him by Tyler could not be more different.

If you could sum up The Secret Race in three words, what would they be?

This audio book was eye opening, well written, well read, and clear to those who are not involved in the cycling sport. Fantastic! Could not stop listening once I started.

What was one of the most memorable moments of The Secret Race?

The sheer honesty through out the entire book. So human with so much emotion. So real and yet so unbelievable.

The detail and description he was able to recount in his recount of personal stories.

Yes.....both. Absolutely amazing.....felt like I was in this world of cycling with Tyler.

The kimono is open!

Tyler and Dan "opened the kimono" on pro cycling, the peloton and Lance in this one. It is all here, what they did, how they did it, why the tests don't matter, the corruption and how they kept it all quite. Hamilton focuses the story on himself and his misgivings and also on his teammates (namely Lance) and the organizations that make it all possible. He names names, places and tactics.

What was most surprising to me is not that these guys were doping and getting away with it, but how big of a bully Lance is. I never thought of Lance as a perfect saint or the devil incarnate. I figured him for a driven guy who liked to win and liked to try and help the cause (cancer support) that he is so passionate about. I could get behind that. What I can't accept is how he has railroaded so many people and sullied their reputations because they told the truth. In this sense, he is worse than a cheater.

Give this one a listen and decide for yourself.

An eye-opener must for anyone in sports

A very well written account from the professional life of Tyler Hamilton. A must, even if you're disgusted by the all the lies.

Favorite Book of the Year

After listening to two books a month in 2012 this book is by far the most memorable of the year. Enjoyed the details of how the doping schemes really occurred and the narration is remarkable. "Oh Tyler, you're too fat" as read by the Sean Runnette has become a regular catch phase around the house.

This is one of the best books I have listened to in a VERY long time!! The history itself is so fascinating it beats every piece of fiction out there. It is a secret world that Hamilton reveals and it feels as if he tells us everything. He paints a truly scary but also a sad portrait of Armstrong but he also openly tells of all his own mistakes - the rules he broke and the lies he told. The mindblowing accounts of the extent to which systematic doping took place and the methods applied is one part of it but the tales of the races, the tactics and the intrigues are almost equally interesting. During the beginning of the book I became more and more sceptical towards cycling but later on I found myself being curious and intrigued. I have never understood how some people can spend so much time following bike races but I might just tune in to the next tour de France!

A lover and a liar

I bought this book because lies fascinate me. Liars too. Cyclists - not so much. That probably has a lot to do with my lukewarm enjoyment of this book.

My other problem was as follows: Either I'm nuts or Tyler Hamilton truly believes that his being a loving person (lots of time spent on how much he loves his folks, his wife, his teammates and the world) means he can do the exact same thing as Lance Armstrong for the very same reasons and not be guilty of the same crime. I'm mystified by this. Also annoyed.

But perhaps Tyler is just being a good domestique. For me, this book has made Lance's lack of apology look far more appealing. In that respect, well done.

This story stays with you long after it's over!

Tyler Hamilton's decision to tell the truth and share his story on 60 minutes provides a great backdrop to the announcements we are seeing today. I recommend this book highly!

It's only a bike race

Where does The Secret Race rank among all the audiobooks you’ve listened to so far?

The overall story is gripping. I couldn't stop listening to it even though I knew much of the back-story. As a cycling fan, Tyler's story opened my eyes to many of the fears I've had throughout the last 15+ years.

Tyler, Lance, Floyd and the peloton.

What does Sean Runnette bring to the story that you wouldn’t experience if you just read the book?

Sean's reading of the book was excellent and captured the appropriate drama.

A sad but fascinating story

This book is a real inside look at pro cycling. It's a sad tale of the temptations — perhaps irresistible — to do whatever it takes to be part of that world. Tyler is pretty hard on himself, so it's very believable. It's filled with too many small details to be totally made up.If you care about pro cycling, this is a great book. I couldn't stop listening. It's a bit like a train wreck: You can't not look. If you don't care about pro cycling, you'll be bored to death. (Ask my wife, I played it in the car on a trip.)The reader does a very creditable job. He didn't get in the way and let the story be the star, as he should have.