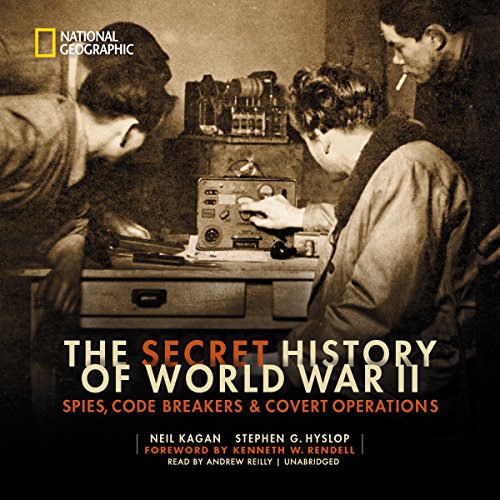 From spy missions to code breaking, this account of the covert operations of World War II takes listeners behind the battle lines and deep into the undercover war effort that changed the course of history.

From the authors who created Eyewitness to World War II and numerous other best-selling reference books, this is the shocking story behind the covert activity that shaped the outcome of one of the world's greatest conflicts - and the destiny of millions of people. National Geographic's landmark book illuminates World War II as never before by taking you inside the secret lives of spies and spymasters; secret agents and secret armies; Enigma machines and code breakers; psychological warfare and black propaganda; secret weapons and secret battle strategies. Seven narrative chapters reveal the truth behind the lies and deception that shaped the "secret war". Renowned historian and top-selling author Stephen Hyslop and Neil Kagan reveal this little-known side of the war in captivating detail, weaving in extraordinary eyewitness accounts and information only recently declassified.

This is a recitation of facts and a few stories. Lots of authoritative information but not engaging at all.

War in the Shadows

My Father was a US Army Air Force Spy during WWII. He was a 2Lt that lead a group of 31 men infiltrated onto a Japanese Occupied Philippine Island. They set up Radio Towers to intercept Japanese Communications. He was also to be on the Third Amphibious Wave onto Mainland Japan.

I am a grandfather myself. I served in the USAF for 29 years as an Intercontinental Continental Ballistic Missile (ICBM) Launch Control Officer that was tasked to launch Nuclear armed Missiles in the event of a Nuclear War. I was also a Fighter Pilot.

And, consequently, I understand more now about what my Father and I performed in service for our Country (US) after reading (listening to it on Audible) than I did at the time of my military service.

I have read many historical accounts of the different aspects of WWII. This one is outstanding in it's integrity and detail. It was clear that the author was committed to telling the truth, even when that truth revealed some unpleasant stories that implicated various members of the elite leaders among the allies in behavior that is surprising to those who have only been exposed to the "Hollywood" version of these events. There were also many wonderful stories of the heroism of the ordinary men and women who fought in the resistance movements. It starts slow but then becomes absolutely fascinating. I hope you enjoy it as much as I did.

A lot of interesting information about WWII. Many things that I didn't know, a few things I did. Underscores the importance of secrets and covert operations that have timely implications in today's struggles against terror organizations.