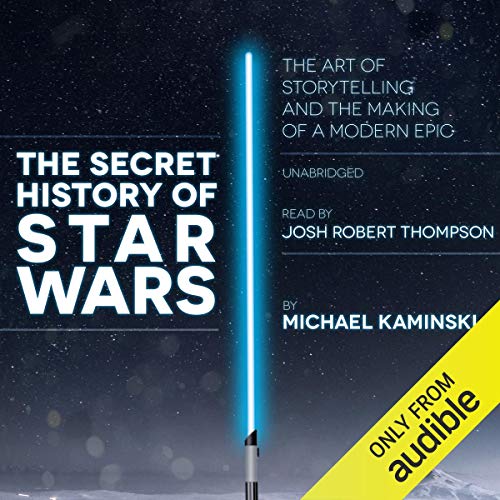 The Secret History of Star Wars

Star Wars is one of the most important cultural phenomena of the Western world. The tale of Luke Skywalker, Han Solo, and the fall and redemption of Anakin Skywalker has become modern myth, an epic tragedy of the corruption of a young man in love into darkness, the rise of evil, and the power of good triumphing in the end. But it didn't start out that way. In this thorough account of one of cinema's most lasting works, Michael Kaminski presents the true history of how Star Wars was written, from its beginnings as a science fiction fairy tale to its development over three decades into the epic we now know, chronicling the methods, techniques, thought processes, and struggles of its creator. For this unauthorized account, he has pored through over 400 sources, from interviews to original scripts, to track how the most powerful modern epic in the world was created, expanded, and finalized into the tale an entire generation has grown up with.

Josh is amazingly capable of immitating the voice, accent, pitch, oral tones of every participant in the saga. Great job!

Not much of a secret, honestly.

As many people have noted, this is a book for the diehards. It is long. It is detail packed. It is repetitious, It is exhaustive in every sense of the word. And, to be blunt, it's an awful lot of words to say what anyone who has followed the Star Wars franchise since the early days already knows: George Lucas never really had a master plan and has been making it up or modifying the past (retcon, as the author helpfully defines multiple times) as he sees fit since the beginning.
That said, the research here is very impressive. Kaminiski has really done his homework, a chore which can't have been too easy given the contradictions of the mountains of Star Wars info available and the way Lucas plays things close the the vest, letting out only what hewants you to know at that time. It's fascinating to hear the script changes or Lucas's own words changing over time. And its fun, and a bit frustrating, to see how Lucas twisted the franchise into a pretzel to fit whatever his vision was that week.
But, I have to admit, this book wore me out. Maybe I'm not an uber fan, just a fanatic? There were only so many times I could hear essentially similar information about this change or that. The minutia is impressive, but overwhelming at times.
Still, if you want to know exactly how we got from the original 1977 movie to the whole universe it is today, I doubt you'll find a better resource.

This would have been a 5 star work, save for the extreme repetition of facts. Ironically, the author thanks his editor up front, who probably should have been fired. This is such an issue that it probably could have reduced the size of the book by a third without loss of content.

That said, this book is a wonderful companion work to J. W. Rinzler's equally incredible "Making of" volumes. This work covers the creative story development of the 6-film saga in full in such a way that no stone is left unturned, and gives us insights into the lives of the people involved, especially that of creator George Lucas. This work is so detailed that it breaks down every single version of the scripts, stage by stage. In this regard, this book is an absolute MUST for the die-hard uber-fans of the Galaxy Far, Far Away.

Not covered are the technical aspects, such as special effects, sound effects, or the musical scores.

What is casually glossed over in the history is the infamous 1978 Holiday Special. There is some basic information on the Ewok movies as well as the Droids and Ewoks cartoon series, but nothing in-depth for these either.

One point of weirdness: the narrator attempts impersonations of the various people who are quoted in interviews or various characters quoted in scripts. Some of these are passable and even respectable, and others are so far off base so as to be screwball if you know what the person is supposed to sound like.

A wonderful and in depth look

I thought this book as fascinating and the performance was wonderful. It was a very unique and in depth look at all of the movies out so far

A must to read for all SW fan: the real story about the creation and alteration of the saga.
The only issue the book several times repeat itself, with proper editing could it be shortened to half, - but the amazing performance helps to get over.

A must-listen for hardcore fans!

Casual fans need not bore themselves with this book, but any "Star Wars Nerd" type fan (you know, the ones who know the difference between the remastered movies and the originals, the ones who are obsessed with Bobba Fett, or who belong(ed) to the 501st legion etc) should read/listen to this book. Then watch the movies (with and without commentary) again. That's all I'm going to say.

This book shows how someone can stumble on to something. His fortunes in the Star Wars saga were not some grand plan but more like a squirrel accidentally finding a nut. A statistical anomaly was his journey even though he has convinced many that he is some intellectual. In the end this was insightful.

It was a little nerdier than I was expecting. There was some good background on Lucas and his wife that was very interesting but it's mostly "Lucas wrote this 30 years ago and now says that and this fan newsletter contradicts him in this way....blah blah blah." There was a lot of good info but it was divided by long boring meaningless story as well. The one thing that I couldn't stop laughing at is how many times the author used the word "swashbuckling." I actually turned it into a drinking game :)

Good information, but is very wordy and redundant. Reminds me of Michael Scott’s philosophy of “Don't ever, for any reason, do anything, to anyone, for any reason, ever, no matter what...”. Would benefit from a concise version.

Truly in depth and exhaustive research

A truly in depth analysis on the history and evolution of Star Wars that over the years has gone through some incorrect revisionist history.

Narration was awesome and exciting to listen too with voice caricatures spot on. I felt like I was listening to a documentary.

Wonderful performance by Josh Robert Thompson. Was that really he who was doing Lucas' voice?

A really informative look at the formative and often fluid past of Star Wars and its many incarnations of scripts and storylines. This is a must for any Star Wars zealot who wants to look at these movies through an open mind an eye. Loved hearing the synopses of the different drafts (especially of the many of Star Wars) that Lucas, Brackett, Kasdan, etc wrote over the years. This being bracketed by the story of Lucas' personal life versus his quest to get these movies made.