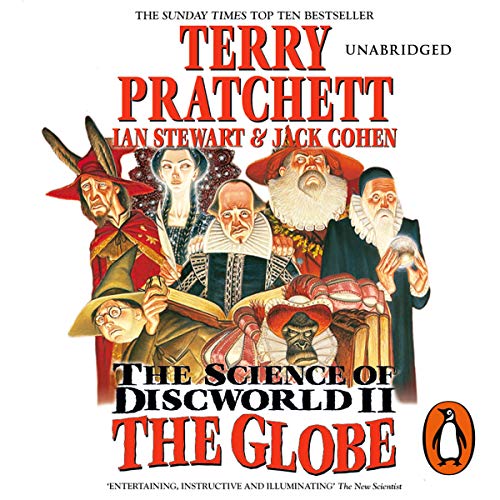 The Science of Discworld II: The Globe

The Science of Discworld II: The Globe

The acclaimed Science of Discworld centred on an original Pratchett story about the Wizards of Discworld. In it they accidentally witnessed the creation and evolution of our universe, a plot which was interleaved with a Cohen & Stewart non-fiction narrative about Big Science. In The Science of Discworld II our authors join forces again to see just what happens when the wizards meddle with history in a battle against the elves for the future of humanity on Earth. London is replaced by a dozy Neanderthal village.

The Renaissance is given a push. The role of fat women in art is developed. And one very famous playwright gets born and writes The Play. Weaving together a fast-paced Discworld novelette with cutting-edge scientific commentary on the evolution and development of the human mind, culture, language, art, and science, this is a book in which 'the hard science is as gripping as the fiction'. (The Times)

Amazing book (not a Discworld nowel)

Would you listen to The Science of Discworld II: The Globe again? Why?

What other book might you compare The Science of Discworld II: The Globe to and why?

Please, do not compare it to other Discworld books. This is not a novel at all. This is more a textbook, about scientific point of view on things, rather than novel. It is not about wizards, it is about Earth nature, people, evolution etc

Science of Discworld is amazing books about science of our world. Not just facts. It is great introduction into modern science world-view. Highly recommended for high school kids, may be university students. Great job, Terry and company.

What disappointed you about The Science of Discworld II: The Globe?

Alternate chapters all the way thru....one mediocre story and bad narration the next waffle of strange science..reads like drunken rave. I gave up after 3 chapters..it is terrible. I loved all other Prachett books. I suggest Witches Abroad if you are new to Terry Pratchett....the best fun in audio listening

Would you ever listen to anything by the authors again?

Only Terry Pratchett. The others were Rubbish!

Yes, the narration was off...all others I've listened to were brilliant!

What character would you cut from The Science of Discworld II: The Globe?

The alternate chapters were garbage.

I found It very hard to rate this book because to me it's like two books meshed together in some horrible "The Fly" like teleporter accident! One was an entertaining and as usual funny Terry Pratchett novel. The other was a book which, if I read it on it's own, I may have enjoyed as a quirky take on the history of earth sciences. When I bought it I thought the science would be a compliment to the novel but there's so much of it, it's burying my Pratchett! and that is a sin that can not be forgiven. I'd give the discworld part 9 stars but the annoyance of having to dig it out has reduced that to 7. They should try publishing the novel part as a stand alone work.

Not Really a Discworld Book