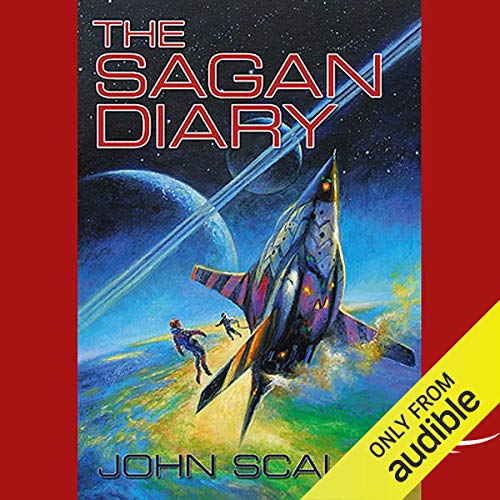 In John Scalzi's best-selling Old Man's War series of science-fiction novels, we see this warrior woman as the other characters see her: silent and strong, from the outside. But now The Sagan Diary shows us Sagan from another point of view - her own. As she prepares to leave military life and join her new husband and adopted daughter on a colony world, Sagan reflects on her life, in her own words - recalling friends, battles, and experiences; illustrating all the violence and wonder of her times; trying to fit "an entire life into this compressed space".

For fans of Scalzi's works, it's an intimate and surprising glimpse into one of his most popular characters. As read by Stephanie Wolfe, it's unlike any other science-fiction story you'll hear this year.

Low stars for the low value

The writing isn't bad, it actually had some interesting quotes. The problem is I paid 5 dollars for an hour of audio book. This should be free, especially considering it contains no direct value to the series.

This is a poem about life and a love letter in book form. If you're looking for plot and action, skip this book. If youre looking for some amazing writing and thought provoking analogies this will fit it nicely after the ghost brigades.

Not Sci Fi and not Poetry

I really liked Old Mans War and most of the rest of the series, but this had no story, no action, and the only Sci Fi was second hand. This is a short story length diary entry monologue by Jane about life, love, killing and death. Maybe (just maybe) if I had just finished Old Mans War yesterday, I might have found the references to that story compelling. I doubt it. It takes really good prose to support a format like this. Proust yes, Scalzi not yet. This is not at all bad, but the writing is just not up to this otherwise boring format. I can’t think of anyone I would recommend this to. If you just finished The Old Mans War and really would like to know Jane’s deep internal longings, well. I would read Old Mans War again, but maybe some people would enjoy The Sagan Diary.

If you're just beginning this series with "Old Mans War"-and take note..these books really need to be listened to in order-the place to listen to this totally different short story is after the second book.."The Ghost Brigades". IMO.

This short bit is written as a diary when Jane Sagan decides to make a big change in her life as a warrior and become a colonist. She downloads memories and thoughts that are supposed to be part of an encyclopedia on the fighters who have made the decision to change their lives but instead records personal thoughts on her past life (lives) and hopes for her future with John Perry.

Written in the first person, it's heartfelt, meaningful, and completely unlike anything Scalzi has previously written-and I commend him on his ability to write such a strong female personality into the book. It is good solid writing and Stephanie Wolfe does a grand job on the narration.

Scalzi himself gives a brief summary on the background of the short story and I am quite happy that he decided to fulfill his obligation by writing this....he really stretched himself and succeeded in making a tremendous addition to the series. A series I've come to enjoy a lot.

Do buy this if you've gotten hooked on the books-it adds a lot.

No action, no dialogue

If you're like me, you are looking at this book because you loved old man's war, ghost brigades, and the lost colony, and you're hoping to get another entertaining, thought-provoking story. Here's a warning that I wish someone had given me:
In a prologue, the author basically states that he's good at writing dialogue and action, and wants to try a story without those elements. I wish I had just deleted the book at that point. I forced myself to listen to the entire book, although my mind kept wandering to topics it found more entertaining, such as fruit fly genetics. I kept hoping there would be something good later on, but there wasn't. If listening to a woman talk about her feelings for an hour and a half sounds like entertainment to you, maybe you'll enjoy this book, but I'm guessing that isn't the case for most fans of old man's war.

I've seen a lot of negative reviews on this piece, and I'd like to respond to them in a way that will help a prospective reader decide whether to purchase this short.

This is not full of thrilling action. It is full of philosophy and thought-provoking questions. A lot of reviews have said that it's not like a normal John Scalzi book, and I would like to suggest that they may have missed all the philosophy and thought-provoking questions that exist in between the action sequences in a normal John Scalzi book.

I'd also like to point out, before any reader of other reviews feels too sorry for the reviewers complaining that they paid for this and it wasn't what they wanted - they could have returned it, so if they didn't that's on them. Also, Scalzi says very clearly at the beginning that this was an experiment for him, and that it's different, so if they thought it was going to be the same old Scazi after that, that's also on them.

This story explores the mind and thoughts of someone with a unique perspective on life, and I think it does it very well. The narrator captures the emotions with skill. However, it's less a story than a mental journey. If you're looking for a plot-driven tale with battles and conquest, this isn't your best bet. If you're interested in a character-driven set piece that reads like a diary entry, then this may do for you.

I would like to point out that Audible has identified it as entry 4.5 of the Old Man's War series, but that's inaccurate. It's really entry 2.5, as it immediately predates the events of The Last Colony.

A very bad story made worse because I paid for it.

What disappointed you about The Sagan Diary?

It was the same as a character development within a story. BUT, without the story. Anyone could have written it. I learned my lesson with Scalzi. It takes years for an author to build integrity with his fans. But a trite experiment of high school quality will lose it faster than your intestines with food poisoning.

What could John Scalzi have done to make this a more enjoyable book for you?

Warn us. Not print it. If he gives books away as he did here, do it with quality. Sooo disappointing.

Would you listen to another book narrated by Stephanie Wolfe and John Scalzi ?

Not automatically as before.

The cost was simply set up to rip people off. I will do my homework next time and not trust that this author portrays integrity. Drop 3 or 4 ratings down on radar. Bad books are a warning for those who are not ready. I was had. Lesson learned.

Not My Cup of Tea: Listen to a Sample First

I have enjoyed listening to every John Scalzi book I could find, until now. And the rotten thing is, it's my fault I listened to this one. Had I done the most cursory of research, I would have realized that this book is not for me. (I haven't read The God Engines yet because I'm aware of its departure from his other work, fwiw, so I'm not sure what I was thinking.)

The Sagan Diary was written, Mr. Scalzi explains, to increase bids at a charity auction. He wrote in a completely different style than any of his other work- an internal monologue. He reports he loves the book. I am so glad that he wrote this book, enjoyed it and likes the outcome. I think many authors write to please their audience and their work suffers for it. Authors should, if they want to, write new things in a new ways that make them grow and develop as artists. Few things are as disappointing as the 18th (or was that 14th) book in a series that is the third book rehashed without the joy and creativity of the original and with no character growth.

Having said that, we, the readers, need to make ourselves aware of what we are getting into - by reading reviews, author notes, and / or listening to samples. I, unfortunately, did not do any of these things. What this book is and how it differs from all of his other writing are not secrets or even hard to find out about. Shame on me.The Sagan Diary is not my cup of tea. I made it through 2 chapters and then cut my losses. The reading is fine, the writing is fine, but I do not want to listen to someone's internal monologue with no story. I could be wrong, there could be a story and I didn't listen long enough to figure out what it was.

I have a great deal of respect for Mr. Scalzi so I am feeling pretty bad about what I'm about to type. I found this work to be pure navel gazing word vomit worthy of the most vapid sixteen year old.

I was so excited to get this audiobook, and there was a great interview with John Scalzi all about him trying a new format and really getting into the female mindset - it sounded so good I couldn't wait! All I can say is that he has no idea how women think (or he knows some very strange robot-like ones), and the new format was a mistake. I have never heard anything so boring, and I think it would be just as dull in print. What a shame! His other work is brilliant.

I have always enjoyed Scalzi's work. This is not one of his usual efforts. In the introduction he explains how this piece came about. I think he did a good job of meeting his goal, but it wasn't quite what I wanted. And at the end, I really don't think I learned anything important about Jane Sagan. I'm glad I listened to it, but I'm also glad it was short.