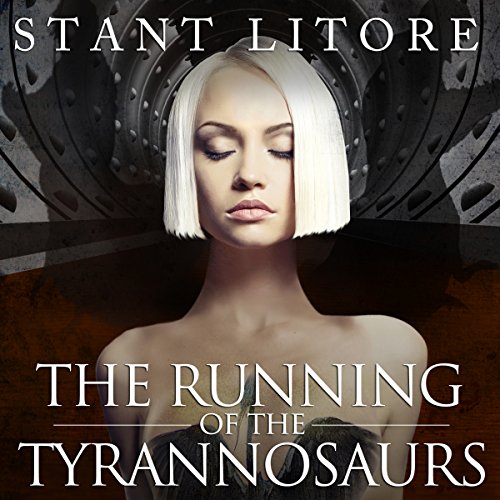 The Running of the Tyrannosaurs

"Somewhere outside this orbital spin-gravity cylinder burn a billion billion stars, but I burn brighter."

On a far future space station, once each year, nano-engineered young women run genetically engineered tyrannosaurs in a race as brutal and bloody as any witnessed in the Roman Circus 3,000 years before.

Egret thinks she is ready for this day. She has been brainwashed for it, trained for it, shaped and reshaped into a sacrificial model of beauty for the entertainment of millions. Her world is one of strict regimen and fierce competition, one in which others can only be competitors or worshippers, never friends, where lack of perfection is punished by burial beneath the red sands and the thundering feet of tyrannosaurs.

But Egret can't imagine how this day might change her. How the scream of a tyrannosaur and the cries of the other sacrifices running beside her might break open the steel surface of her world.

It is not a day you will forget.

Very interesting premise. Would be very interested in hearing it fleshed out a little more. Man and dinosaur living together and enjoying competition would be great. Would recommend for a very quick
Read/listen.

A Story of Maturity, Grace & Honor with Dinosaurs

A young Tyrannosaur rider surpasses her rival in a "running with bulls" event featuring T-Rex instead bovines. Great voice narration by Amy McFadden reflects the excitement and sadness of the piece. Great story and writing from Stant Litore! Highly Recommend!

If you could sum up The Running of the Tyrannosaurs in three words, what would they be?

What other book might you compare The Running of the Tyrannosaurs to and why?

The Hunger Games. Similar premises, but Running is better written.

Have you listened to any of Amy McFadden’s other performances before? How does this one compare?

one day Stant Litore will be an author that is taught in literature classes, because his writing is as meaningful and significant as Vonnegut, Huxley, Orwell and Clarke. Litore is also what I consider to be a “writer’s writer” and worth studying for form and content by anyone who is interested in writing fiction