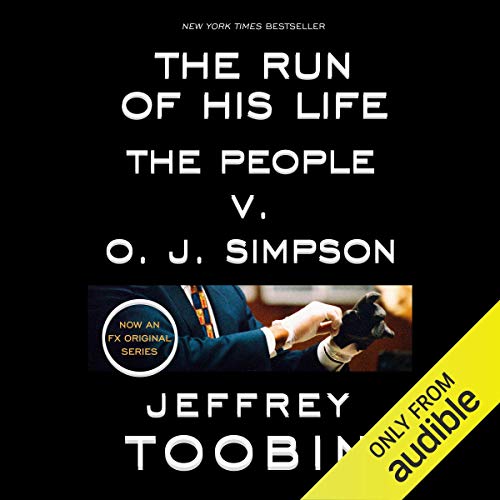 The Run of His Life

The definitive account of the O. J. Simpson trial, The Run of His Life is a prodigious feat of reporting that could have been written only by the foremost legal journalist of our time. First published less than a year after the infamous verdict, Jeffrey Toobin's nonfiction masterpiece tells the whole story, from the murders of Nicole Brown Simpson and Ronald Goldman to the ruthless gamesmanship behind the scenes of "the trial of the century". Rich in character, as propulsive as a legal thriller, this enduring narrative continues to shock and fascinate with its candid depiction of the human drama that upended American life.

Please note: This audiobook is a recording of the original 1996 edition of The Run of His Life. It does not include an Afterword added to the 2013 reissued edition.

"This is the book to read." (Michiko Kakutani, The New York Times)
"This book stands out as a gripping and colorful account of the crime and trial that captured the world's attention." ( Boston Sunday Globe)
"A real page-turner.... Strips away the months of circuslike televised proceedings and the sordid tell-all books and lays out a simple, but devastating, synopsis of the case." ( Entertainment Weekly)

STORY (historical) - I didn't watch the live coverage of OJ trial back in 1994, so I really had no personal opinion about his controversial not guilty verdict. I did, however, watch the 2016 mini-series, so now I get what all the fuss was about. OMG, he was so incredibly guilty!! But at the conclusion of the series, I still had lingering questions about different things, so I started this book to hopefully fill in some cracks. I am very glad I did. This book contains tons more detail about the evidence, the trial and all the players. The author obviously believes OJ was guilty, but his investigation is thorough and he presents both sides of the case from the beginning of the investigation until slightly after the trial. Great book.

PERFORMANCE - The narrator does a good job, but I'm not in love with his voice.

OVERALL - There is detailed analysis of the gruesome crime scene and the victims' injuries. There is a small amount of cursing and, of course, discussion about Mark Fuhrman and his use of the racist N-word. Even if you find these things offensive, I would still highly recommend this book for anyone interested in more info on the OJ trial. It's fascinating.

Fear and Loathing in Los Angeles

I saw Jeffrey Toobin, the author of "The Run of His Life: The People v. O.J. Simpson" (1996) asleep on CNN a couple of weeks ago. The demands of commenting on FX's "American Crime Story" (2016) mini-series based on this book and his ongoing analysis of the death of Antonin Scalia and President Obama's (so far) unproductive nomination of Merrick Garland to the US Supreme Court must have overwhelmed him. I suspect that Toobin, a Harvard educated lawyer and ardent follower of the US Supreme Court ("The Nine: Inside the Secret World of the Supreme Court" (2007)) couldn't stay away from the drama and intrigue of the high court he loves.

The O.J. Simpson trial, though? Toobin wrote what was arguably the best book on the chaos that was the crime itself; the riveting drama of the low speed chase; and the unrelenting trial and media coverage that consumed Los Angeles for almost a year. "The Run of His Life" is the best book I've come across about 'The (Last) Trial of the Century.' There are far too many books on the topic to read. Marcia Clark's "Without a Doubt" (1998) was quite good, and had a very personal discussion of the defense aspect of the case. Faye Resnick's "Nicole Brown Simpson: The Private Diary of a Life Interrupted" (1994)? Well, let's just say I thumbed through a copy at The 99 Cent Store. It was sitting next to a stack of musty copies of the equally execrable "Madam Foreman: A Rush to Judgment" (1995) by jurors Armanda Cooley et. al.

As good as Toobin's book really is (and correspondingly, the television treatment), I am pretty sure that by the end of the trial, he'd lost respect for just about everyone involved - including himself. There was Judge Lance Ito, who looked great on paper, but had no case management skills and no courtroom control. Christopher Darden, a promising young prosecutor, had his career derailed by allowing himself to be goaded by the savviest trial attorney of the bunch, Johnnie L. Cochran, Jr. There were the sycophants Robert Kardashian and Robert Shapiro, and the amoral F. Lee Bailey. The stressed Marcia Clark, manipulated by a malicious soon-to-be ex-husband. The not-successfully-secret racist cop Mark Fuhrman. A terminally lazy investigator, Tom Lange.

And, of course, there is, was and always will be Orinthal James Simpson and Nicole Brown Simpson, and the relationship they had that ended in murderous rage, taking along with it an unfortunate Ron Goldman. Toobin barely mentions Goldman in "The Run of His Life". That is, in abstract, sad. Goldman and the Simpsons' children were the only people in the whole saga who unquestionably deserve respect and empathy. Perhaps it is better that Toobin just let them all be.

"The Run of His Life" is an easy listen, but for Toobin at his finest, listen to "The Nine."

What I thought as a child, shattered by logic

If you could sum up The Run of His Life in three words, what would they be?

The O.J. trial that you didn't see.

What aspect of Stephen Bel Davies’s performance would you have changed?

If you could give The Run of His Life a new subtitle, what would it be?

More than just O.J. are responsible for his guilt.

I remember once thinking that O.J. was innocent. After reading If I did It, I was convinced otherwise. This book also helps me realize that if it weren't for the poor performance of the prosecution, the blatant race baiting of Johnny Cochran, The past of the LAPD, and the behavior of Mark Furman, O.J. wold have been convicted and there would be no one regardless of color would have felt sorry for him, or remained unconvinced of his guilt.

This book gives a detailed account of the events of June 12th, 1994 and the aftermath. This audiobook really sucks you in.

This trial marks a time in life... everyone of a certain
age remembers this tragedy perfectly

After hearing this book I am even more ashamed
of the jurors. How could they ?
I am so deeply sad that Nicoles life was like this
hopefully other domestic violence victims will be treated
differently because of her story.
Ron died a hero - so sad for his family

One of my faves of all time

This was an awesome book to listen to. Very well written and performed. At first I wasn't sure if the narrator was going to get on my nerves. But that thought quickly vanished and I was able to completely enjoy the reading.
Big recommend to anyone interested in this subject or True Crime books in general.

Great audio books are made or broken by the narrator and this guy delivered. The way the story was told kept me interested and listening. It was long, but it went fast. Great book.

Would have been less feminine sounding if a woman narrated. Content was very detailed and thorough but the flamboyance of the reader was distracting.

I've read the book before and loved it, so was looking forward to &quot;reading&quot; it again via the audio book. This was a complete mismatch between narrator and book - I only listened a bit and gave up. The tone of the narration is all wrong as is the narrator's inflections. I so wish Jeffrey Toobin had narrated his own book

Narrator has cynical, smarmy tone and doesn't allow the author's fine words to speak for themselves. Narrator mispronounced at least four words that an educated speaker should know.