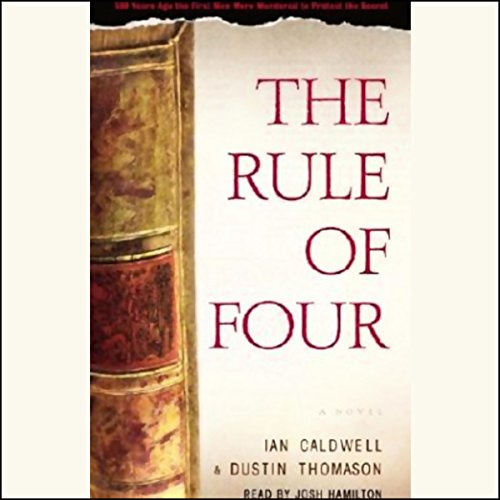 The Rule of Four

Princeton. Good Friday, 1999. On the eve of graduation, two students are a hairsbreadth from solving the mysteries of the Hypnerotomachia Poliphili. Famous for its hypnotic power over those who study it, the 500-year-old Hypnerotomachia may finally reveal its secrets to Tom Sullivan, whose father was obsessed with the book, and Paul Harris, whose future depends on it. As the deadline looms, research has stalled, until an ancient diary surfaces. What Tom and Paul discover inside shocks even them: proof that the location of a hidden crypt has been ciphered within the pages of the obscure Renaissance text.

Armed with this final clue, the two friends delve into the bizarre world of the Hypnerotomachia, a world of forgotten erudition, strange sexual appetites, and terrible violence. But just as they begin to realize the magnitude of their discovery, Princeton's snowy campus is rocked: a longtime student of the book is murdered, shot dead in the hushed halls of the history department.

A tale of timeless intrigue, dazzling scholarship, and great imaginative power, The Rule of Four is the story of a young man divided between the future's promise and the past's allure, guided only by friendship and love.

"The authors, best friends since childhood, have made an impressive debut, a coming-of-age novel in the guise of a thriller, packed with history (real and invented) and intellectual excitement." (Booklist)
"A smart, swift, multitextured tale that both entertains and informs." (San Francisco Chronicle)
"[An] intriguing intellectual suspense novel." (Publishers Weekly)

An exercise in ego for the authors, this book dragged from the beginning. I finally gave up after the first 1/2. This is a yawner that drags on and on barely advancing the story while delving into details that stiffled the plot. Save your credit.

While some of the characters' discussions of Renaissance history are fun and the theme of obsession with a strange book is promising, this novel never decides what it wants to be and so never becomes anything. There is a 'coming of age' plot (lost son seeks reconciliation with late lost father) that everything hangs onto and if that had been more carefully developed, this might have been a very good novel. It has a very neatly observed setting and the authors are intelligent but they lack the power to sustain tension and suspense. The mysterious book subplot (Hypnerotomachia Poliphili) wanders around until it seems to just lie down and nap. Worst of all, the people in the book are very flat (no pun intended). I never felt like I was listening to more than one character speaking, although the narrator tried his best. Definitely mental chewing gum that doesn't retain its flavor to the end.

It's rare that I'll rate higher than the majority, but boy, this is one. Having listened to Davinci Code and read Angels and Demons, I always thought Dan Brown was interesting, but a bit "pop literature". Rule of Four was better thought out, and much more interesting, even if it didn't have the 'car chase' effect of massive surprises, plot shifts and other devices that Dan Brown uses. For my money, I recommend Rule of Four over Dan Brown every day. I thought it was superb.

This is one of those books where one must actually think in order to enjoy it. That said, one doesn't have to analyze it line-by-line, or anything, either. If anyone is interested in this book, I recommend that he make sure he has the patience to read the book all the way through. Intertwining the thrill of discovery, the intrigue of murder, and the excitement of love, The Rule of Four is an exciting (yes, exciting) book for those willing to read (or listen to) it. Believe me, it's not as wordy or as hard to read as some have tried to make it seem - I'm only 16 years old, and it suits me just fine.

One of the best audiobooks of the year

I've been playing this in my car for a couple weeks and I think it's a great story. The narrator does a fine job, I can easily distinguish all the characters, no problem at all. Perhaps it's not for the short attention spans, but it's a very interesting story, and the info about the renaissance is particularly enjoyable.

I wasnt sure about this book when I started. It was not a mesmerizing novel at the start. After a while though, you keep going and low and behold it snatches you up in a web. The web is mixed with relationships, scholastic challenges and genius, deception, and yes money, power, "possble" fame, and lost treasure.
The ending is a little predictable but you dont care because the book was so well written. I have to hand it to the authors since it was an odd subject and I doubt too many people could have pulled this subject off.

I really enjoyed this story and the characters. Yes, it was a little slow at times, but it wasn't boring. In fact, I was excited and eager to finish the story as it went on.

This book, billed as an academic Dan Brown thriller, started out OK but then lapsed into smart people doing very illogical and stupid things. The ending (hard to hold on this long) was contrived and predictable. Save your time for another book.

Not a bad book, but not one I would recommend when there are so many other good ones available. I completely agree with the other reviewers that say it tries to do too much. It never succeeds in being a historical fiction, a coming of age story, or a thriller. It makes an attempt at each and becomes muddled. The sudden changes in style were frustrating, like watching two television shows, switching from one to the other on commercial breaks.

The ending is wholly unsatsfying. I got the feeling the authors got tired of writing and fashioned a movie style ending that seems substandard. The majority of the book was so intelligent, I have to give it a 3 out of 5. It is a shame, because there were the makings of at least two very good books in this one.

This is NOT the DaVinci Code

Though there is a mystery and there are murders and deaths, this book is more a story about friendship and the coming of age that happens to adults after we are supposed to be all grown up. It does not move like a mystry or a thriller, but the characters of the story are very human and their thirst for knowledge and understanding is believable. This is not the Da Vinci Code, but the writing is superior to it and does not have those annoying cliches and tedious prose you find in so many best-sellers like the DVC. The portrayal of academic life is very real (if not for an undergrad, then for a grad student). The book does not move fast, but the characters are sympathetic and the story is solid.