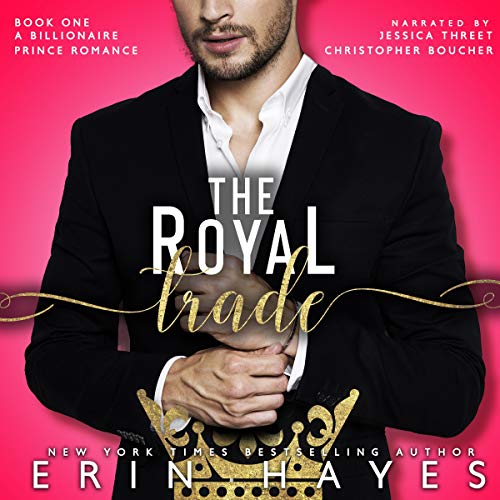 Cara thought she was living the fairy tale life. After all, she is engaged to the man of her dreams, who just happens to be the prince of an island nation in the Mediterranean. But when he publicly cheats on her, her life is turned upside down and she doesn’t want to come back to reality. Then Eric, her ex-fiancée’s brother and a playboy prince himself, offers her the chance to run away from it all. Because he fell for her first. And he’s going to prove to her that she fell for the wrong prince. The Royal Trade is the first book in A Billionaire Prince Romance. It can be listened to as a standalone.

I enjoyed the story a lot but, I think Eric and Cara should have waited a little longer before having sex. It just felt a little "ho" ish to me. I mean she was engaged to another guy just the week before. Other than that, I really did enjoy the story. It was a quick read and the brothers voices were so hot! On second thought, maybe that's what sealed it for Cara. Hell, if either one of those brothers would've spoken to me like they did to Cara, my panties probably would've fallen off too 😂.

A Girl From Missouri Meets Two Princes, Who Does She Love

Prince Phillip is engaged to Cara a girl from Missouri when he cheats and breaks her heart.
His brother Eric has loved Cara for four years and jumped from bed to bed trying to get over her...it doesn’t work so he goes to Cara to try to win her heart.
It’s always fun to watch a man fall totally in love and knows she is the one for her.
A sweet romance with fantastic narrators I’m hearing for the first time.
What fun and sweet a romance worth your time.

The Royal Trade was a short but fun story. It was interesting and moved along at a good pace. I really liked both Cara and Eric. Jessica and Christopher did a great job with this duet narration. I was given a free review copy of this audiobook at my request and have voluntarily left this review.

Narrators are great. Story is predictable but enjoyable and I actually like a short length sometimes. I liked both the MC and the LI.

I very much enjoyed this story. Very well written and kept me entertained.
The narrators did a fantastic job.

This was my first Erin Hayes's book and won't be my last! This is the first book in A Billionaire Prince Romance Series, a Royal Romance/Forbidden Story. Wow! I love this Royal Romance! Cara and Eric's story is beautifully written, fun, and sweet. Eric is handsome, honest, protective, and caring. Cara is a lovely woman, sweet, and beautiful. Phillip is an intriguing character. Herbert, Eric's valet, is a fun and great secondary character! This was my first listen to Jessica Threet and Christopher Boucher's voices. They did an outstanding job with this duet narration. I love their voice together. They both have a great voice, really pleasant to listen to. This is a great team author/narrators! I enjoyed listening to this audiobook and I highly recommend it! Now, I can't wait for the next book in the Series, The Royal Pain, Phillip's story! I was given a free review copy of the audiobook at my request and have voluntarily left this review.

This is an entertaining read. It’s lighthearted and cute. I enjoyed the storyline and liked the feelings I got from the book. I adored Cara and Eric. Cara’s kind of nerdy, very sweet, big hearted and forgiving. The kind of person I could see myself being friends with.
Eric is a great guy underneath his playboy exterior. He treats Cara like an equal and the love he has for her is easily visible in his actions.
I also really liked Herbert. He’s such a sweet older gentleman who is almost like a father to Eric. The narration for Cara and Eric‘s story was wonderful.
I enjoyed taking this journey with them and look forward to the next book.

Sovereign in the Mediterranean!

The Royal TradeA (Billionaire Prince Romance, Book One). A sweet & sexy spicy hot listen perfect for cozening up next to the fireplace. I loved this novella & could not stop listening to this audio. A highly entertaining listen with compelling characters that have fun personalities. I was hooked right from the start of the decadently delicious listen. Looking forward to listening to the next audio in this series.

Love me a Billionaire Prince

I really enjoyed Cara and Erika story. I listened to it in one afternoon as I just couldn’t stop listening to it. The dual narration really works Looking forward to the next book In the series
I received this book in exchange for an honest review