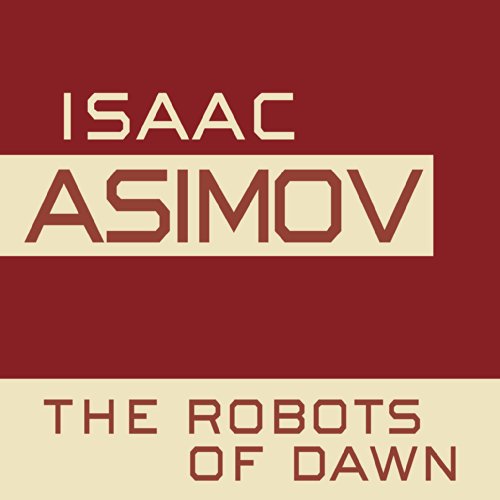 The Robots of Dawn

A millennium into the future two advances have altered the course of human history: the colonization of the Galaxy and the creation of the positronic brain. Isaac Asimov's Robot novels chronicle the unlikely partnership between a New York City detective and a humanoid robot who must learn to work together.

Detective Elijah Baiey is called to the Spacer world Aurora to solve a bizarre case of roboticide. The prime suspect is a gifted roboticist who had the means, the motive, and the opportunity to commit the crime. There's only one catch: Baley and his positronic partner, R. Daneel Olivaw, must prove the man innocent. For in a case of political intrigue and love between woman and robot gone tragically wrong, there's more at stake than simple justice. This time Baley's career, his life, and Earth's right to pioneer the Galaxy lie in the delicate balance.

Some of Audible and Asimov's Best

Asimov is a very underrated writer. The Robot Series are a good example of his early work, Robots of Dawn was written later in the series and you can see how he matured as a writer, thinker and puzzle creator/solver. If you are an Asimov completest, this book represents an important bridge in understanding the connection between the Galactic Empire and the Foundation. Great stuff..

What other book might you compare The Robots of Dawn to and why?

It favorably compares to the other Robot novels, but this is a more mature version of the story. The themes are adult and take the story out of its childhood premises of earlier novels. In fact he plays on the theme of the young child and robot fascination with an interesting literary allusion.

What does William Dufris bring to the story that you wouldn’t experience if you just read the book?

I really like the work that Dufris did in this series. Very well done.

The ending to this story is clever, well executed and a bridge to later novels, series and story lines. The intelligence of Asimov in weaving a complex story together is exemplified in how this specific story arch ends. the next book, Robots and Empire is somewhat different since Elijah Baily is only in that story historically. We say good to Elijah in this story as a foundational Asimov character, but it is not done melodramatically, its done in a way that demonstrates his intelligence and tenacity.

I implore Audible to make available Robots and Empire. I realize digital rights are bit complicated these days but this is an important story and the bridge to Prelude to Foundation. I would like to thank Audible for making the Robot Series available, it was briefly pulled off the Audible shelves, while they fixed an audio problem.

Exactly the ending this series deserved without sacrificing the perfect starting point for the foundation and empire books.

Great Narrator. The story kept my attention and went in a few directions I didn't expect (all positive).

Not as good as the first two in the series. Asimov’s vision of a space-age future are fascinating, but his characters’ dialog are all flat, speaking much the way the author spoke, with little variation. His romantic scenes lead one to wonder if the man himself, great though he was, was not a robot. And, similar to the other two books, his version of water-tight whodunit logic and courtroom examination are absurdly unrealistic. All that said, the flaws don’t ruin the experience, merely tarnish it. The narrator performance is appropriate and skillful, with changes of voice per character, and an unforgettable portrayal of robotic characters, in particular.

The best of the Robot Series

What did you love best about The Robots of Dawn?

Great story to wrap up the early days of the pre empire galaxy. Elijah Bailey becomes more of a Sherlock Holmes than ever. Asimov even has great love scenes and the usual political/sci/fi suspense.
The reader is superb, although men can only do so much to sound convincing as Gladaya...

Bailey himself is the best, but all the characters are vivid and powerful. Both robots are amazing. Daneel is the prototype for Data (Star Trek) and sounds just like him throughout the book. Giscaerd grows on you and emerges big at the end.

No, I space it out for driving since it's mostly an iPod in automobile setup, but then it makes me want to drive!

I heard all the Foundation books, six in all, before the three Robot books. Now the Foundation makes more sense. I will look for whatever the sequel may be to Robots of Dawn, if any.

Great story, excellent creation of societies representing plausible extremes of human thinking. Throwing them together to contrast the concepts, Asimov leaves a thread of sense leading to better futures.

Azimov takes the best of the Detective story and Marry it to scifi with such deftness that it does not matter if you like sci fi or a good detective story you will love this book.

Good voice work and an excellent story. I don't think there's a bad story in the series and the voice acting adds to the story without distracting.

3rd in a great story!

Loved it! I'm on to another. It's too bad that there won't be any more from this great man.

A CLASSIC FOR ALL TIMES

This was such a well written book. I loved Willam Dufris’s performance. It can be a standalone book but I loved that it followed the detective Bailey on his adventure to the spacer worlds again. It is a quick read. Or I should say listen. I would recommend this book.